Installation view of “Sander Breure & Witte van Hulzen: Loved by you, delivered by us” at Tegenboschvanvreden’s Art Brussels booth.

The 37th iteration of Art Brussels, now impressively ensconced in the spectacular Tour & Taxis, the former Royal Customs House, opened to a V.I.P crowd on April 25, and with its high glass roof and industrial proportions, the fair’s 148 participating galleries had a great concrete canvas to work with.

Most striking to this first-time visitor was the notable absence of mega galleries, such as Gagosian, Hauser & Wirth, and David Zwirner—a favorable and even refreshing line-up chock-full of mostly lesser-known galleries from Europe and beyond.

There was also a notable absence of American collectors, though the indomitable, art-hunting duo of Michael and Susan Hort spoke to the appeal of this mostly regional fair. “It’s a small fair and it’s low pressure,” Susan said, “without the big pressure of the larger fairs like Basel and Frieze.”

The couple struck gold at Brussels’s Rodolphe Janssen, snapping up several quirkily figurative works by the Cologne-based brothers Gert and Uwe Tobias, whose solo exhibition, “Ladder without Tree,” opened at the gallery’s Rue de Livourne location earlier in the week. “We have a lot of their work,” Susan said. The brothers work in tandem on their pieces, imbuing the canvases with a slyly Surrealist–schizophrenic tension.

At Beijing/London’s HdM Gallery, new, mostly abstract works by Ye Linghan, Barthelemy Toguo, and Lee Jin Woo sold at prices ranging from €3,500 to €24,000 ($3,900–$26,900). And in the “back room” of its booth, New York’s Martos Gallery had expressionist works by the 67-year-old Detroit painter Tyree Guyton (no relation to Wade), executed in acrylic on plywood, which sold at prices ranging from $8,000 to $25,000. Guyton will have a solo at Martos in New York later this year.

“This is a great fair for finding mid-career artists,” said London art adviser Bjorn Steen, who was steering a young client across the turquoise carpeting cushioning the concrete floors of the exhibition hall. “It’s not like a blood sport here.”

At Brussels’s Xavier Hufkens, a solo presentation of three luscious abstract paintings by Los Angeles artist Lesley Vance sold for $65,000 each and won the fair’s €10,000 ($11,200) SOLO Prize award from a jury including Iwona Blazwick, the director of the Whitechapel Gallery in London. “She only makes 12 to 15 paintings a year,” said Hufkens, “and all three went to European collectors. There’s no point in showing them here and sending them back to America.”

That same day, the heavyweight gallery opened a two-venue mega-show for Paul McCarthy that includes a trio of the artist’s most important video performance installations of the past 20 years, including CSSC (Coach Stage Stage Coach) and CP (Caribbean Pirates), as well as a newer work, Oval Office (2015–19).

“He spent ten days installing the works, of which 90 percent was new,” said Hufkens. “We sold Oval Office to a new collector for slightly over $2 million dollars and other works ranging in price from $500,000 to $1.4 million, as well as photographs for $35,000 each.”

“He’s a true artist,” Hufkens added, “and that money goes back into making films and new works.”

Judging by the surging crowd at the Hufkens opening, the McCarthy affair was the standout event of the week, even if you can’t take the artist’s wildly perverse interpretations of Disney-fied pirates, the Wild West, and lurid lunatics in the Oval Office.

In the fair’s Discovery section, artist duo Sander Breure & Witte van Hulzen at Amsterdam’s Tegenboschvanvreden won the Discovery prize with cleverly constructed figurative sculptures, including Loved by you, Delivered by Us, an assemblage of a bicycle delivery satchel, broken pieces of a bicycle, and a severed head. That one sold for €9,500 ($10,700). 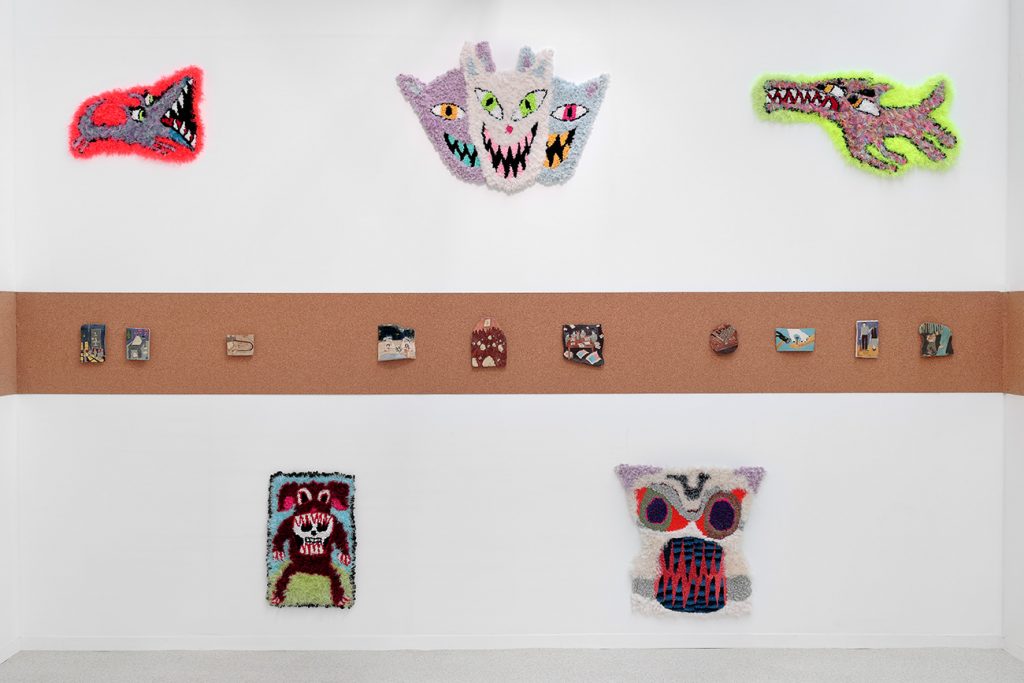 Before departing Art Brussels, seasoned Antwerp dealer Frank Demaegd of Zeno X Gallery delivered a kind of elegy to the fair by saying, “I didn’t do it for many years because of Hong Kong, Frieze, Art Basel—it was too much for my schedule—but we came back last year and we should do it every year.”

A quick side trip to the satellite fair Poppositions, held in a beautifully restored slaughterhouse (on a street accurately named Rue de l’Abattoir), offered many surprises, including modestly priced works by Camille Leherpeur at Brussels’s Archiraar Gallery.

Poppositions provided a fairly smooth transition to Gallery Weekend Berlin, a collective effort by 45 Berlin galleries who each chipped in €5,000 ($5,600) to be included in the event, which ran April 26 through 28.

Berlin, of course, is vast and treading from Charlottenburg to Friedrichshain is an arduous undertaking, unless of course you have a chauffeur-driven BMW to power your way, as was the case for some guests. (The carmaker was a sponsor.) Though it’s not an art fair, the weekend offers similar amenities and diversions, with visits to private collections and a spate of gallery openings, all in the noble pursuit of selling art.

It was surprising, for this viewer, to push through the heaving opening of “Dystopia,” with new work by Martin Eder, at Galerie Eigen + Art. I could have sworn his star faded two decades ago, but judging by the crowds, price points, and sales of his still-kitsch-driven, slightly naughty works of femme fatales against various backgrounds (like the Brutalist architecture of London’s Barbican), one just can’t count anyone out. Numerous works, including Whatever is behind that Door (2019), in oil on canvas, ripe with a Blade Runner-like vibe (the original version), sold at prices ranging from €40,000 to €110,000 ($44,900–$123,400).

More impressive, at least in terms of image-making, was a bold suite of new paintings by Leipzig painter Matthias Weischer at König Galerie, installed in the soaring and windowless nave of the deconsecrated St. Agnes Church that the gallery calls home. Sixteen new works animated the monolithic space, featuring Weischer’s nuanced and densely textured figuration of mostly small-scaled interiors, some with figures. By the day after the April 26 opening, König had sold seven of the works that ranged in price from €32,000 to €205,000 ($35,900 to $229,900). Though recently absent from the London contemporary art evening sales, Weischer’s star certainly looks to be ascendant.

At Jana Euler’s “Great White Fear” exhibition at Galerie Neu, all eight of her paintings of large, phallus-shaped sharks bursting out of becalmed waters sold at prices ranging from €50,000 to €90,000 ($56,100–$100,900), though I couldn’t honestly imagine one on my living room wall. That said, it helps that the expressions on the shark faces carry a kind of human dimension.

At Galeria Plan B, a posthumous survey of 31 works by the Romanian artist Horia Damian turned my head, especially a late work, Premier Grand Chevalier, in mixed media on wooden panels from 2004. It was priced at €45,000 ($50,500).

A Minimalist/Conceptual feast of works awaited at Konrad Fischer Galerie, led by a massive red granite piece, Granite Crossing (2019) by Richard Long that can be yours for €300,000 ($337,000), but it was a brilliant exhibition at the Schinkel Pavillion, “Straying from the Line,” curated by Nina Pohl, that carried the weekend.

It is a feminist-driven tour-de-force, installed in the DDR-era monument, confronting sexism, racism, and other forms of historic abuse, tied together with works by Nancy Spero, the Guerrilla Girls, Eva Hesse, Betye Saar, Lee Lozano, Ellen Gallagher, Rosemarie Trockel and Lynda Benglis, among others.

The parade of market events continues this week in New York, with Frieze New York opening to select guests on Wednesday.