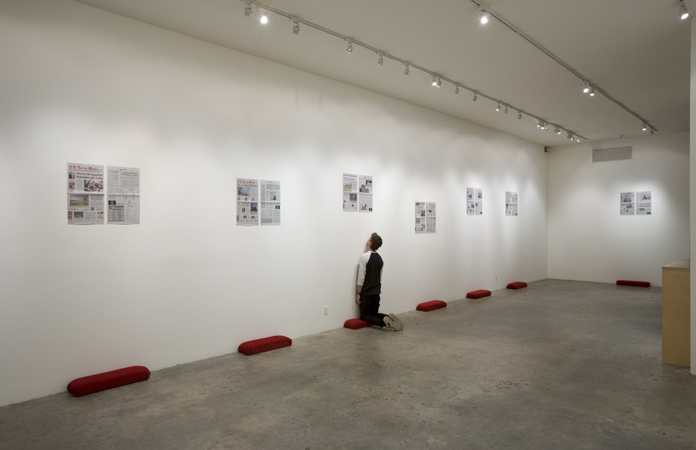 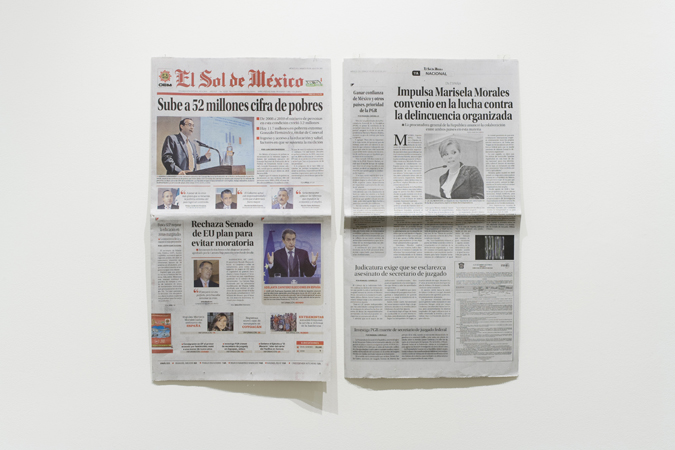 Steve Turner Contemporary is pleased to present Whispering, a solo exhibition by Mexico City-based artist Antonio Vega Macotela. This is the artist’s first solo exhibition in the United States. It will feature three works that resulted from the artist’s practice of creating interventions in the public sphere, all of which relate to the volatile situation in Mexico stemming from narcotics trafficking.

Murmurs is a project that utilizes a communication code that the artist learned from an imprisoned Mexican drug trafficker. The code is an anamorphic writing system that allows messages to be read only from specific vantage points. Using the code, Macotela inserted a series of advertisements in El Sol de Mexico, a national Mexican newspaper, and each ad contained a different phrase. The installation will consist of the actual newspapers pinned to the gallery walls. To discern the phrases, viewers will have to position themselves on their knees with their chests and chins pressed against the wall while looking up. Only in this position of prayer, or imminent execution, can a viewer decode the phrase.

In The Snout , the artist placed six advertisements in El Sol de Mexico, each showing a close-up view of a snarling wolf. Over the course of the series, the wolf’s snout gradually closed, and by coincidence, on the day of the final insertion, when the snout was closed, there was a story on same page that described the suspicious death of the Interior Minister of Mexico.

The artist will also present A Platoon , a video that recorded the dreams of seven Mexican soldiers. Because they feared for themselves, the soldiers would not relate their dreams audibly. Instead, they silently mouthed the descriptions of their dreams and only images of their mouths were recorded.