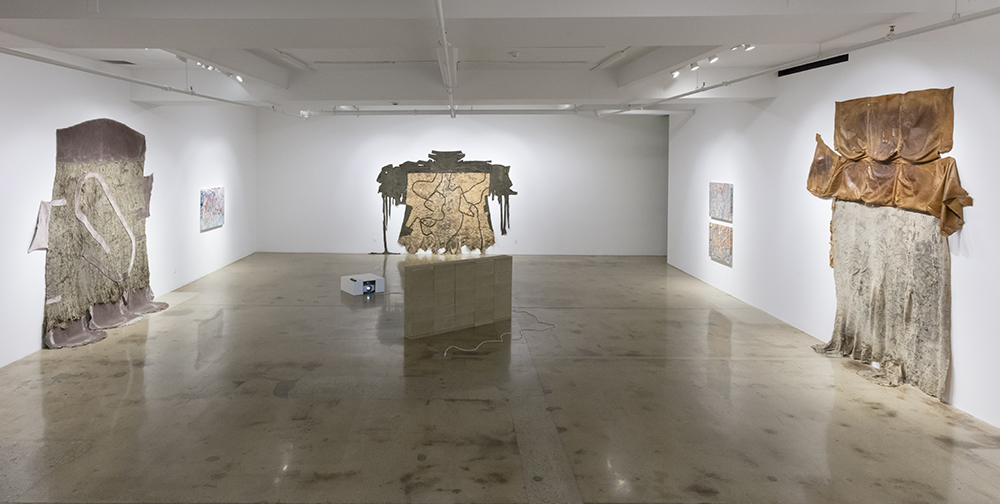 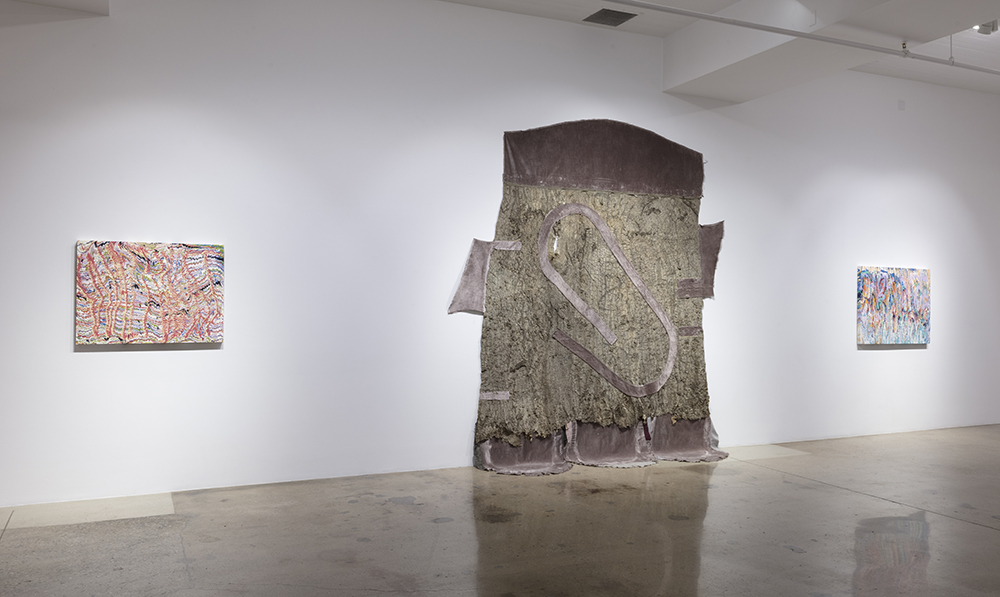 Force of Nature features painting and video by six international artists: Eddie Rodolfo Aparicio (Los Angeles), Glen Baldridge (New York), Émilie Brout & Maxime Marion (Paris), Nick Farhi (Los Angeles), John Knuth (Los Angeles) and Lukas Marxt (Cologne). While traditional landscape art has often been concerned with the sublime and the spiritual, a different focus operates in Force of Nature. The six artists here are inspired by nature to express ideas that are especially relevant now. Immigration, climate change, land abuse, new technology and social media are some of the themes of this exhibition, and while the artists convey political and environmental realities that are bleak, they still rely on the beauty of nature to convey their sentiments.

Eddie Rodolfo Aparicio is a first-generation American of Salvadoran descent whose work focuses on the Salvadoran diaspora, migration, and the interrelated histories of Central and North America. He uses rubber, an important natural resource from El Salvador (and Mexico), to create paintings that encapsulate natural and man-made images embedded within the surface of urban trees in Los Angeles and Mexico City. Using rubber to make “life masks” of the surfaces of urban trees, Aparicio retains the painted and carved graffiti, dirt and natural decay into the surfaces of these molded works, which also incorporate decades of urban history. The works are beautiful as paintings but they also represent a complicated history that relates to the Spanish conquest as well as to the complex relationships between Central America, Mexico and the United States.

Glen Baldridge grew up in Great Falls, Montana amidst vast open spaces and in close proximity to glacial lakes and dense forests. A New Yorker since 2000, his practice encompasses sculpture, printmaking and painting which frequently relate to youth angst and lament for the worsening condition of the environment. In Force of Nature, he presents new paintings that include phrases (dark daze, no way, damaged, spare me and buzz kill) that have been camouflaged to varying degrees of legibility.

Émilie Brout and Maxime Marion are a Paris-based collaborative duo that work in video, painting and sculpture to highlight the nexus of nature and new technology. In Force of Nature, they present three miniature paintings of nature scenes. They are painted on smart phones atop Instagram posts and will be presented with the phones powered on so that they are electronically illuminated.

Los Angeles-based Nick Farhi is an intuitive painter of wide-ranging subjects (figures, drum skins, wine stains, checkered flags, skies) whose most recent works focus on cacti and desert scenes. The images largely come from the artist’s imagination, but in using colors that suggest a fiery landscape, the artist simultaneously creates a beautiful color composition and a frightening outlook.

John Knuth is a Los Angeles-based artist who often interacts with nature to create works of art. In a recent painting series he used thousands of flies to create marks upon sheets of paper. For this exhibition, he presents mountain scenes that have been crafted from UV film that comes in various colors. The scenes appear to be snowy crags and jagged crevasses.

Cologne-based Lukas Marxt has worked in many distant corners of the world to explore the dialogue between human and geological existence and the impact of man upon nature. He has shot films in the Arctic; a total eclipse from a uranium mine in Australia and the raging sea from an oil rig off Norway. In Force of Nature, Marxt presents Imperial Valley (cultivated run-off), a 14-minute video that he shot in California’s most southeastern county. He used a drone camera to shoot the entire length of an irrigation canal as it coursed through a desert landscape. The landscape that Marxt portrays is more geometric abstraction than it is a nature scene suggesting that the post-apocalypse is not a matter for the future, but that we are already well within it.