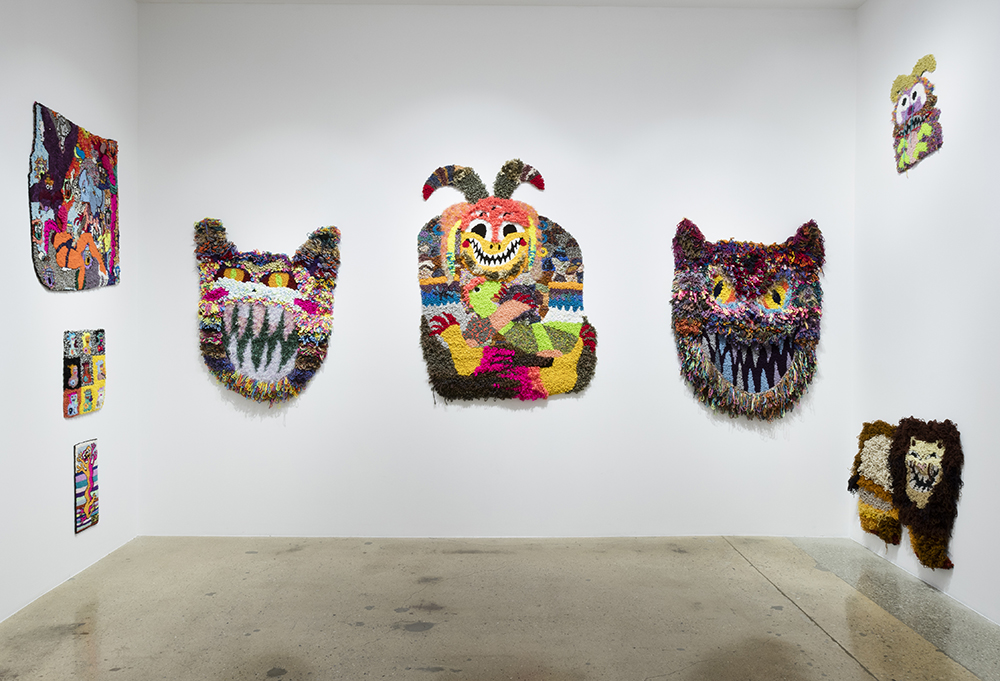 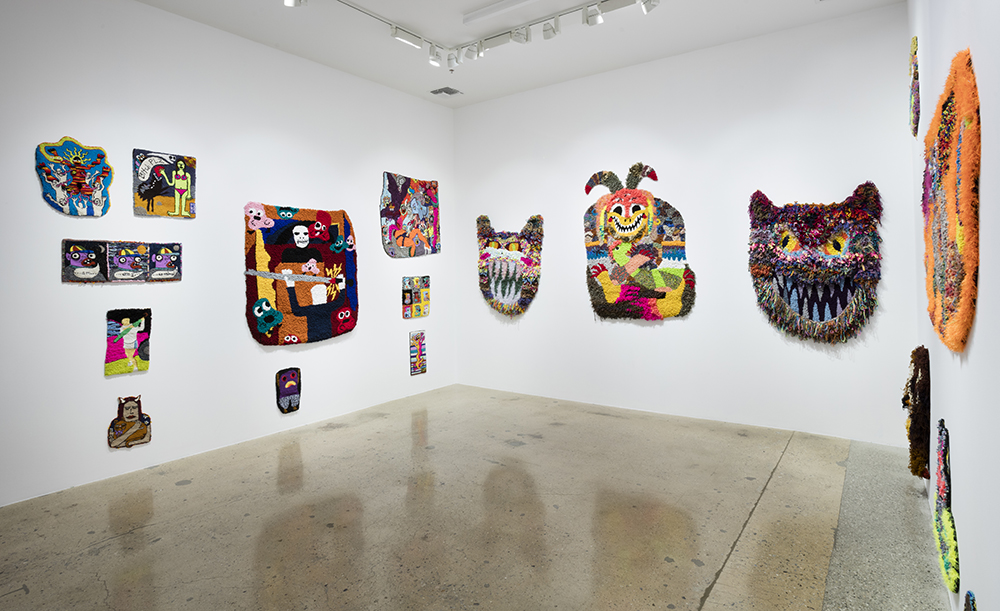 Steve Turner is pleased to present Monster World, a solo exhibition by Toronto-based Hannah Epstein that consists of a selection of brightly colored hooked rugs that depict a variety of monsters as imagined by the artist, whether derived from her study of folklore, her visual backlog of TV images, or from her interest in internet memes.

Epstein grew up in Halifax, Nova Scotia, a cold, grey peninsula where she sought refuge indoors watching television. The sharp contrast between the saturated, colorful images on TV and the monotony of her surroundings had a big impact on the artist, and when later, she studied folklore at Memorial University in Newfoundland, she realized that TV had provided her with a visual vocabulary of cartoon and pop culture images that resonate with the folkloric tradition.

A few years later Epstein learned how to make hooked rugs which has enabled her to use a traditional craft medium to become a folklorist in the Internet age. Epstein’s monsters, whether crazy cats, spooky hybrid animals, or a wild-eyed, shaved-headed Brittney Spears, remind us that monsters have long been lurking in the corners of our imagination.

Hannah Epstein earned a BA from Memorial University of Newfoundland (2009) and an MFA from Carnegie Mellon (2017). Her work has been included in exhibitions in Canada and the United States since 2011. This is her first exhibition at Steve Turner.

Hannah Epstein’s “Soft Teeth,” left, “The Hybrid Kid” and “Mouser” are all from 2017. (Don Lewis / Hannah Epstein and Steve Turner)

Hannah Epstein’s riotous exhibition at Steve Turner may bring back memories of hours spent with latch hook rug kits — those ready-to-assemble crafts that, strand by strand, formed a fuzzy image of a cheery rainbow, heart or “Sesame Street” character.

The Canadian artist’s hooked rugs, however, are the bad sister-in-laws of those anodyne projects. “Monster World” assembles shaggy, snarling, off-kilter beasts that have more to do with alternative comics, cartoons and Internet culture than they do with sweetness and light. Strewn across a wall, they are the underbelly of cute, the id of the home crafter.

There are, of course, cats. “Mouser” is a cat’s face, nearly 5 feet tall, hooked in a wild combination of yarns that manages to feel both colorful and dingy. The mouth is stretched into a gleeful, toothy grin, toeing the line between cheer and evil. Nearby, in  “Bad Mascot,” a smaller lion also bares its teeth: You can almost hear it hissing.

“The Hybrid Kid” depicts a humanoid creature with large, moth-like antennae and five eyes. Huddled in a protective posture, but grinning maniacally through its pain, one of its arms appears to be a snake, or perhaps it’s just wearing a sock puppet. It’s sweet; the monstrousness sneaks up on you. Also cute is the multi-colored, griffin-like animal in “Eats Its Young” choking down a smaller version of itself. On its belly, as if in X-ray vision, we see a tiny, staring face. It’s not exactly an image of maternal solicitude.

Other works forgo cuteness altogether. There are images of Britney Spears with shaved head, a cartoon girl getting punched in the face and an anime-style woman being encircled and penetrated by brightly colored tentacles, each inscribed with the word “memes.” These are girls gone wrong, or girls done wrong.

Similarly, Epstein’s rugs are nice projects gone awry. Her use of the hooked rug invokes hours of repetitious labor spent following a pattern. Such activities may be fun and relaxing, but they’re also designed to keep girls’ hands busy. They accustom girls to drudgery.

In creating her own patterns, Epstein has twisted the hooked rug into something not only novel but also appealing — even joyful. It feels honest, capturing the craziness, the violence, the screaming fury of our day. Anger is held in tension with cuteness, sweetness, fuzziness. These are the hooked rugs we might have made had we the nerve to burst out of our skins.