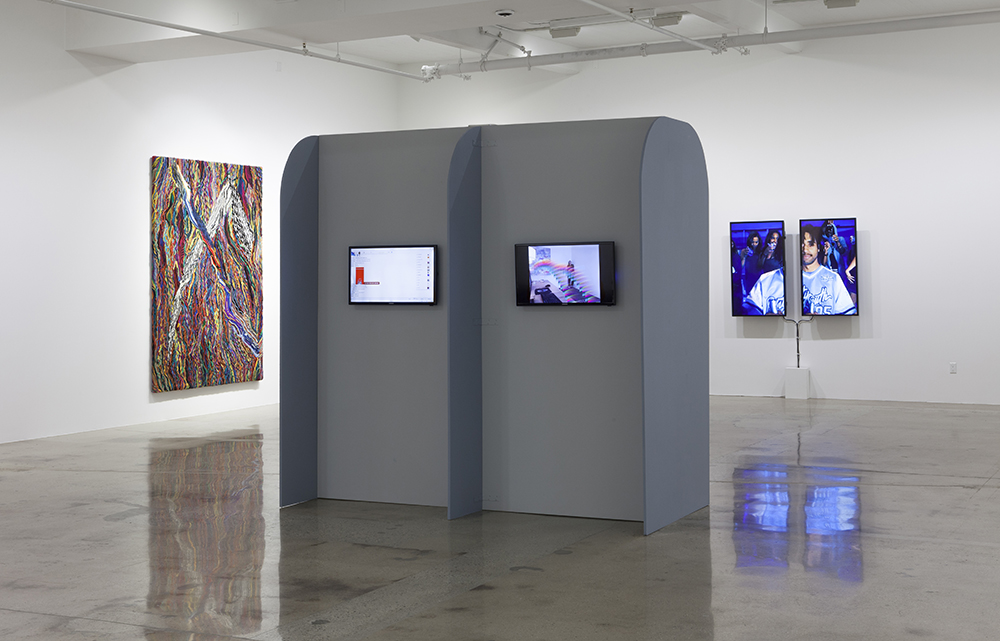 Jayson Musson. How To Be A Successful Artist, 2010. Digital video, 3 minutes (still) 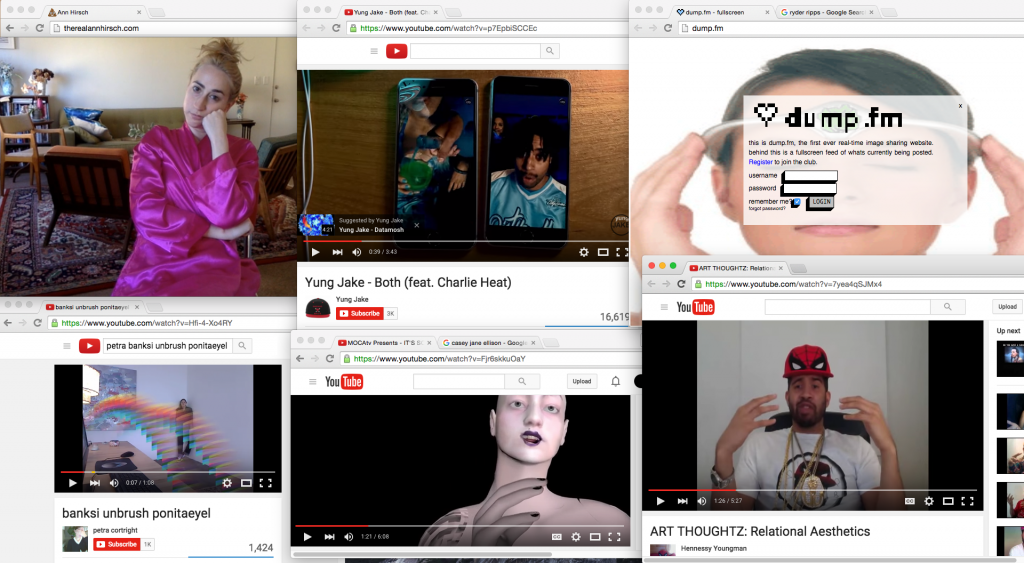 The Real World brings together six emerging artists– Petra Cortright, Casey Jane Ellison, Ann Hirsch, Jayson Musson, Ryder Ripps and Yung Jake. While each artist has a distinctive practice and body of work, they all share a common history of having developed their practices online. As their practices matured, they also began to create paintings, video, sculpture and performances for brick-and-mortar galleries. Their practices function both online and in real space and time, mirroring the dual nature of life as currently lived—we all spend more and more time online and would rather lose our wallets than our smartphones. As the Internet continues to become more incorporated into daily life, users not only go online to search, shop and surf the net, they also engage in all kinds of online-only social behavior. This includes the pursuit of friends, collaborators, dates and even spouses. Through the intimacy that builds as users insert so much personal information into their smartphones, their level of comfort with publicly broadcasting such private content broadens. We see it ALL—young women putting on make-up and pouting seductively as they would in their own mirrors; “belfies” where people jiggle and celebrate their asses; all kinds of inside jokes-turned-memes where catch phrases are attached to embarrassing images of celebrities or funny looking kittens; and the incessant looping of gifs overlaid with pop music.

These six artists, having come of age in the 2000s, take this type of reflective lifestyle as a given. As such, their work often includes various forms of self-portraiture that mimics the selfie-generation. Much like reality television, Instagram, Periscope and Youtube stars who use social media to gain an instant, vast audience, emerging artists are also using online platforms to appeal to mass audiences in similar fashion. However unlike Internet celebrities whose fame often stems merely from the sheer volume of content they post, these artists use irony and satire to critique the self-indulgence and senselessness rampant in online social networks.

In addition to their successes online, which are generally measured in numbers of followers and likes, these artists have simultaneously developed works for the physical space of the white cube. The Real World presents works from both realms. In so doing, the exhibition reveals how blurred the distinctions between the way we live in real life and the way we live online have become. At the same time, we see through each artist’s work, that viewing objects in space is still a significant way to understand art and culture that cannot be replaced by the Internet experience.

Los Angeles-based Petra Cortright began her online practice in 2008, when she posted her now famous YouTube videos that functioned as looping portraiture. Using default design tools popular at the time, Cortright both enhances and obscures her own image. In The Real World, Cortright will present a new short video that harkens back to her YouTube roots, utilizing a rainbow effect that showers colorful, abstract streams across the screen. Also on view will be one of Cortright’s paintings in which she eliminates her likeness while presenting the aesthetic of her videos onto a two-dimensional surface.

Casey Jane Ellison, also based in Los Angeles, works as an artist, stand-up comedian and talk show host. She often abstracts and roboticizes video footage of herself reciting comedy routines that she also performs at local clubs and in galleries. The Real World presents Part ll of Ellison’s single-channel video installation, It’s So Important to Seem Wonderful (2014), first exhibited earlier this year in the New Museum’s Triennial. Here Ellison has expanded the installation to include three channels that seem to be speaking to each other.

Los Angeles-based Ann Hirsch has made work about reality television and even appeared in a dating-themed VH1 show in 2010. Decidedly feminist, Hirsch’s videos, online performances and recent body of drawings, tackle the complexities of what it means to be a woman and an artist today. She will present two new drawings in The Real World that were first conceived during therapy sessions in early adolescence. Hirsch will also present a new video wherein she appears to be giving birth.

New York-based Jayson Musson is widely known for the character Hennessy Youngman whose series, Art Thoughtz, was first presented on YouTube in 2010. Hennessy is a cultural critic who humorously speaks directly to the Internet on art world topics including “How To Be A Successful Artist;” “How To Be A Successful Black Artist;” “On Beauty” and on “Relational Aesthetics.” In addition to presenting Art Thoughtz, Musson will also present one of his new Coogi Sweater paintings.

Ryder Ripps, also based in New York, has a diverse practice that incorporates a broad array of activities. A skilled programmer and self-proclaimed “Internet archeologist,” Ripps is the Creative Director of his web design company, OKFocus and has also co-founded several other online platforms including Dump.fm. Popularized in 2010, Dump.fm is known for its outrageous contributors and spontaneous, free-flowing format. The Real World will juxtapose Ripps’ work as both a programmer and artist by exhibiting a live feed of Dump.fm in its current state alongside a new series of digital prints based on face detection surveillance software systems.

Yung Jake is a Los Angeles-based artist who creates video, sculpture, painting, music and performance. His work often addresses the social environment of the Internet. In Datamosh, his 2011 rap video, his lyrics include a reference to another artist in The Real World “…makin’ gifs on the web like Ryder Ripps.” Yung Jake uses the visual language and style of the Internet across his diverse output. He cuts, copies, pastes, crops, edits and airbrushes imagery that floats freely throughout cyber networks. For The Real World, Yung Jake will present a new sculpture that features advertising imagery for the alcohol brands Cîroc and Hypnotq alongside a two-channel video installation of a recent music video.