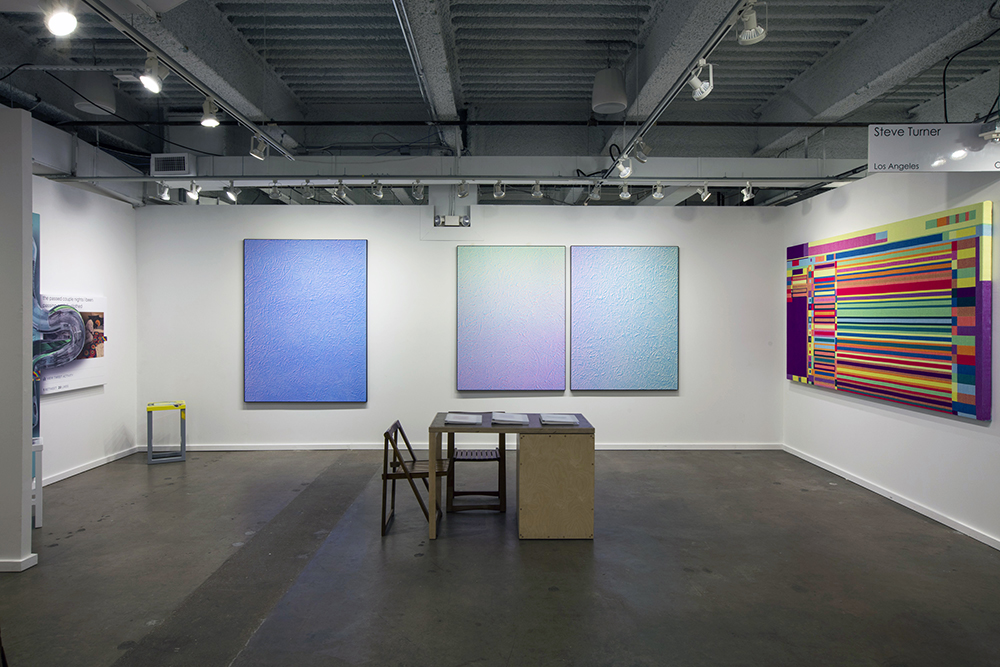 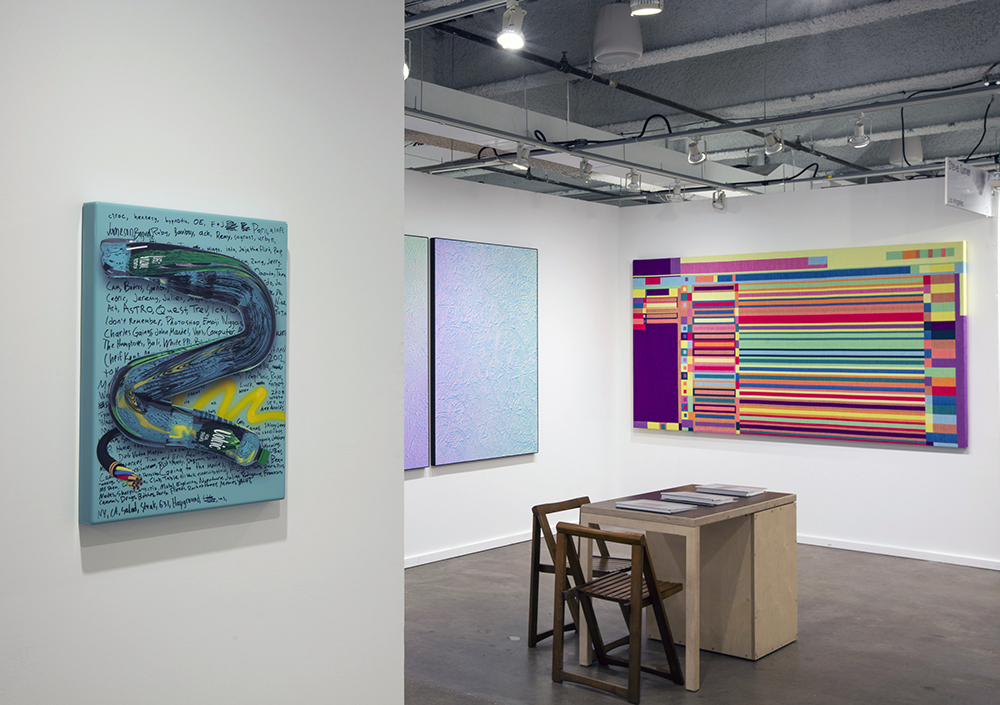 Steve Turner will present new works by Rafaël Rozendaal, Michael Staniak and Yung Jake when it exhibits at the Dallas Art for the first time. All three artists use digital and traditional techniques to translate web-based content to physical paintings and sculptures.

Rafaël Rozendaal will present a jacquard-woven tapestry which has a composition that is based on that of an abstracted gmail inbox. Rozendaal designed a plugin that translates the underlying structure of any website and transforms it into a colorful abstraction. He likens pixels on a computer screen to stitches on a weaving and uses bright colors to achieve maximum impact.

Michael Staniak will present new paintings that appear to be digitally printed but are actually created entirely by hand. He drew gestures similar to those one might make while using a touchscreen device into casting compound and then painted luminous shades of pink, blue and yellow to create the illusion of a flat surface that glows like a computer screen.

Yung Jake will present sculptural paintings consisting of powder-coated steel panels upon which he has both painted and printed symbols of his online and offline worlds. He will also present related stools upon which viewers can sit and watch a selection of his rap videos.

Rafaël Rozendaal (born 1980, Amsterdam) has had solo exhibitions at Steve Turner, Los Angeles (2012, 2014 & 2016); Spencer Brownstone, New York (2010), TSCA Gallery, Tokyo (2010 & 2016), Netherlands Media Art Institute, Amsterdam (2010) and Stedelijk Museum, Amsterdam (2006). His works were presented on the world’s largest LED screen in Seoul Square (2012, curated by Lauren Cornell) and have been included in the Internet Pavillion at the Venice Biennial (2009) and the Valencia Biennial (2005). He also participated in Maps for the 21st Century at the DLD Conference in Munich (2012, curated by Johannes Fricke & Hans Ulrich Obrist). He lives and works in New York.

Michael Staniak (born 1982, Melbourne) earned a BFA and an MFA from the Victorian College of the Arts, Melbourne as well as a BA from Middle Tennessee State University. He has had solo exhibitions at Contemporary Art Museum, St. Louis (2015); Annarumma Gallery, Naples (2015); and Steve Turner, Los Angeles (2014 & 2015). His work has been included in group shows at The Moving Museum’s Istanbul project (2014) and Kunsthalle Vienna (2014 & 2015). The Contemporary Art Museum, St. Louis will publish a monograph later this year. He lives and works in Melbourne.

Yung Jake was established on the Internet in 2011. He is best known for his rap videos that integrate the worlds of hip-hop, technology, social media and contemporary art. Datamosh (2011) parodied the trend in music video of datamoshing (a digital technique that distorts images) while playing to a contemporary digital art audience. In E.m-bed.de/d (2012), he commented on the pursuit of Internet fame. He has had three solo shows with Steve Turner and a solo project at the 2014 fair, Art Berlin Contemporary. His work has been screened at Sundance (2013) and he has performed in Los Angeles at the Hammer Museum and Redcat (2013); Museum of Contemporary Art (2014) and J. Paul Getty Museum (2015). He earned a BFA at CalArts in 2012. He will perform at the Museum of Modern Art, New York and have a solo project at Art Brussels in April.