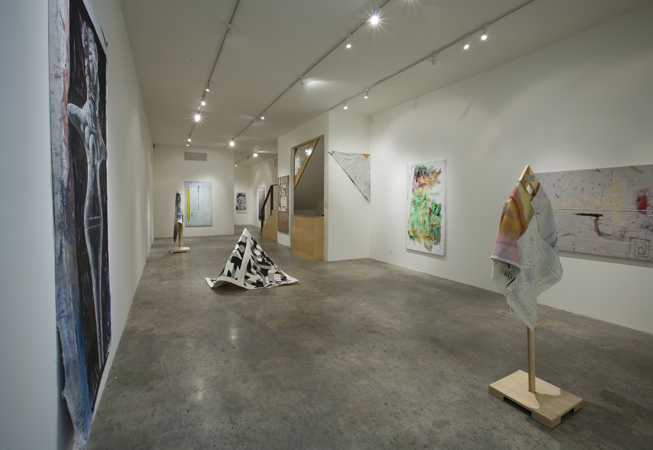 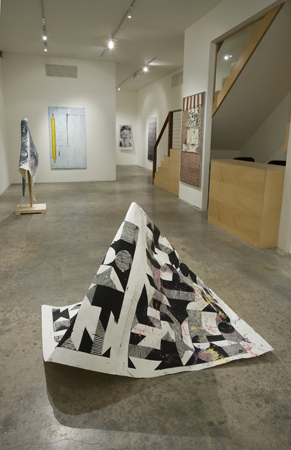 What Then Is This Method of Building Audio-Visual Correspondences? (Woman), 2011. Oil on drop cloth, 96 x 48 inches.

Steve Turner Contemporary is pleased to present fragilee Hors devors, an exhibition featuring collaborative works by Matt Chambers and Alexander Wolff. Paintings, works on paper, textiles and a feature length film entitled Figueroa It Out were all created within the past six months in a fully collaborative process, a spontaneous negotiation between the two artists’ opposing styles. In unprecedented fashion, the entire gallery has been turned over to the two artists. In addition, a storefront two doors east of the gallery is also is being used. The following letter from Matt Chambers best explains the making of this exhibition.

To Whom It May Concern:

Alexander Wolff and I will be introducing a collaborative body of work at Steve Turner Contemporary (July 14 – August 13) in the exhibition fragilee Hors devors.

In the introduction to Seeing Out Louder Jerry Saltz wrote:

The closest I’ve come to getting a handle on what art may be is an idea that painter Eric Fischl has talked about. Imagine calling two pets, one a dog, the other a cat. Asking a dog to do something is an amazing, riveting experience. You say, “Come here Fido;” Fido looks up, pads over, puts his head on your lap, pants, and wags his tail. You’ve had a direct communication with another species; you and Fido are sharing a common, fairly linear language. This is a very special experience.

Now imagine calling over the cat. You say, “Come here Snowflake.” Snowflake might glance over, twitch once or twice, possibly circle a nearby table leg, rub it, lie down, flick its tail, and look away from you. There’s nothing direct in this. Yet something gigantic has happened, something very much like art. The cat has placed a third thing between you and itself. In order to understand the cat you have to grasp this non-linear, indirect, circuitous strange mysterious miraculous communication.

That seemed to clarify things for a while. Now, thanks to a conversation I had with artist Diana Spungin, I see a rub in the theory. It is still true that to viewers and the outside world, art is a cat. But it turns out that to artists, art is a dog!

Not when Alexander and I work together. What started out as Alexander wanting to make some figurative paintings and me wanting to let some chaos into the studio has blossomed into a group of dense paintings, works on paper, sculptures, and a video.

In our first meetings we just talked, an activity that we both noticed was largely absent in our respective circles. We both had plenty of ideas but neither of us liked anything the other suggested, and so it was that disagreement got us to begin working together. More talking ensued, also some drinking, yelling, some more work, and then some more talking. The slow process akin to erosion or senate-floor debates created pieces without precedent. Differences of opinion were constant, and each of us fought for and honed our objectives with the understanding that no argument could be used twice. There is no common ground between us in regards to “what is cool” or “what is not cool.” And in contrast to the current fashion in abstract painting and in our own solo practices, we used no system that would allow our work to repeat itself.

There is no good or bad. There is boring and interesting; and if you’re interested in cats, I think you will find this work to be interesting.

It should also be noted that approximately half of the collaborative works (as well as numerous of my own works) were lost in a fire that destroyed my studio in early June. Alexander, Andrew Kennedy, and I watched the fire spread from a neighboring building into the studio that I shared with Brendan Fowler. Lesson: document everything in your studio everyday you’re there and keep copies in different locations, not for your ego, but to save headaches with lawyers, insurance companies, and authorities.