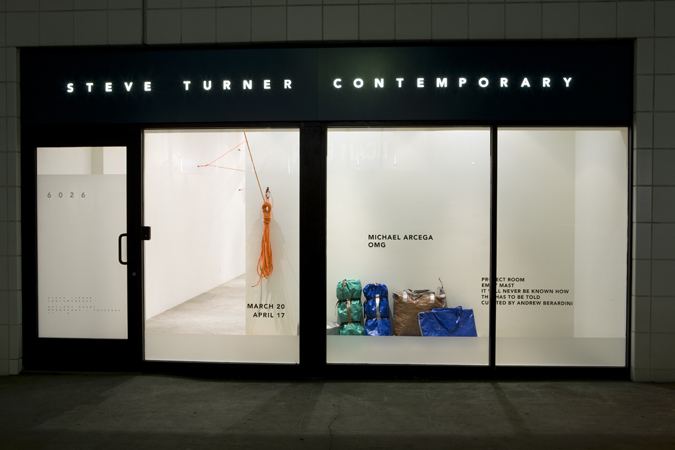 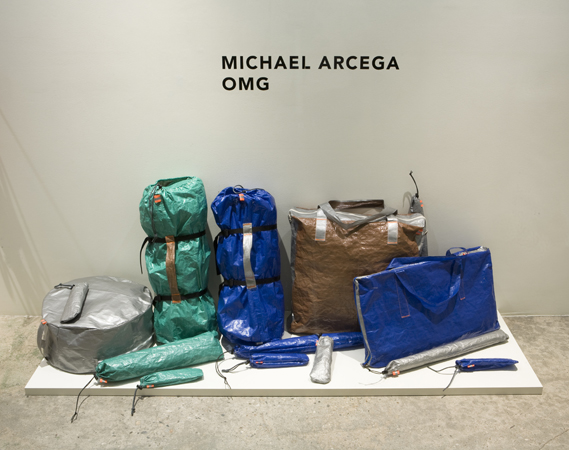 For his first exhibition at Steve Turner Contemporary, Michael Arcega has created sculptural works of ubiquitous urban fixtures including mailboxes, utility poles and fire hydrants. However, the artist has not merely recreated these objects; he has instead employed the same architectural strategies that are involved in erecting emergency tents to create his work. His transformation of poly tarp, a material commonly used in temporary emergency situations, suggests both quiet urgency and structural informality. These “tents” will be displayed in a chaotic fashion throughout the gallery, suspended by a network of safety ropes, parachute cord and webbing. In the wake of the mega-disasters in Port-au-Prince, Manila, New Orleans and Oaxaca, millions of people have been displaced; Arcega imagines a similar fate for California when the “Big One” hits. In creating works that are both functional and dysfunctional, he anticipates a post-catastrophic situation in which government fails, resulting in a temporary nomadic state.

Michael Arcega is an interdisciplinary artist working primarily in sculpture and installation. Inspired by language and jokes, he utilizes comedic strategies to comment on darker global issues. Born in Manila, Philippines, he and his family moved to Southern California when he was ten. He received his BFA at the San Francisco Art Institute (1998) and his MFA at Stanford University (2009). He has had solo exhibitions at the de Young Museum, San Francisco (2007); Museum of Contemporary Art, San Diego (2005); The Contemporary Museum, Honolulu (2008); Marx & Zavattero, San Francisco (2006 & 2009) and Nicelle Beauchene Gallery, New York (2008). His work has also been included in numerous group exhibitions including Geography of Trans-territories, Walter and McBean Galleries, San Francisco (Curated by Hou Hanru, 2010); California Biennial, Orange County Museum of Art, Newport Beach (2008); One Way or Another: Asian American Art Now, Asia Society, New York (Curated by Melissa Chiu, Karen Higa and Susette Min, 2006).