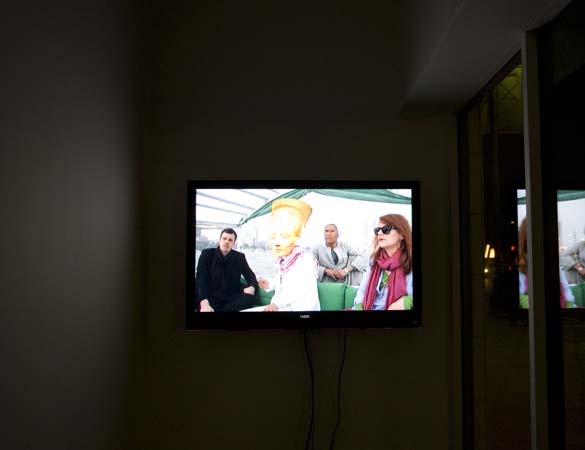 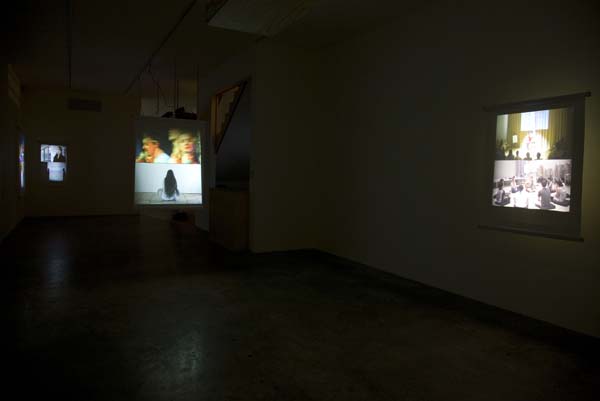 Steve Turner Contemporary presents Suspension of Beliefs, a performance and video installation by the Los Angeles art performance group My Barbarian. The exhibition includes six videos shot during My Barbarian performance/theater workshops held in New York, Rome, Cairo, Vilnius and Los Angeles, as well as a live performance by My Barbarian with the band LA Fog. The performance, titled In Defiance of Gravity, will be presented one night only, on opening night, Saturday, May 2, 2009 at 8:00 PM.

My Barbarian is a Los Angeles-based performance collective founded in 2000 by Malik Gaines, Jade Gordon and Alexandro Segade. The trio creates site-specific performances, musical concerts, theatrical situations and video installations. With humor and wit, My Barbarian conflates fantasy and satire to reinterpret historical and contemporary events. The current exhibition Suspension of Beliefs is the troupefs play on the assumption that theater requires the audience’s suspension of disbelief, modeled in part on the experimental theater of the 1960s. Combining disparate elements from the political theater of Augusto Boal’s Theater of the Oppressed (Brazil), The Living Theatre (New York), and the critical antiteater (established by Rainer Werner Fassbinder in Munich), My Barbarian created the Post-Living Ante-Action Theater (PoLAAT), a series of performance workshops that began during a residency at the New Museum (New York, 2008). While informed by the sense of urgency embodied by the performance practices of the past, the PoLAAT‘s inherently ironic approach is critical of both nostalgia and utopianism.

In Suspension of Beliefs, My Barbarian explores cultural difference by showing the ways in which one song, with a simple refrain and haunting melody, changes when performed in different countries. In Rome, the group made a faux Neo-Realist film, with references to Italian film director Pier Paolo Pasolini’s Roman poems, in which they sing the song in Italian and act out scenes inspired by the film, gMama Romah (1962). In Cairo, the group quietly performs the song on a felucca on the Nile in order to avoid attracting the attention of the police on a nearby boat. The four videos in the exhibition complicate the viewer’s inclination to believe what they see, thereby creating a suspension of beliefs. Suspending belief is visualized in the project as the literal attempt to levitate a person, as the videos reveal.

My Barbarian has performed widely in the States and abroad. They were included in the 2005 and 2007 Performa Biennials; the 2006 and 2008 California Biennials; the 2007 Montreal Biennial; and the Baltic Triennial 2009 in Vilnius, Lithuania. In 2008, the group performed commissioned works for the New Museum and Galleria Civica, Trento, and also presented a durational performance installation with Steve Turner Contemporary at Art Positions, Art Basel Miami Beach. In 2008, My Barbarian received an Art Matters grant to make a new performance and video project at the Townhouse Gallery, in Cairo. Their exhibition with Steve Turner Contemporary is their first solo commercial gallery exhibition.