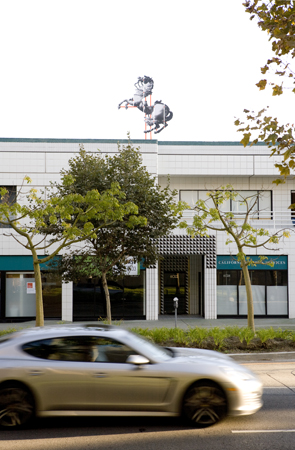 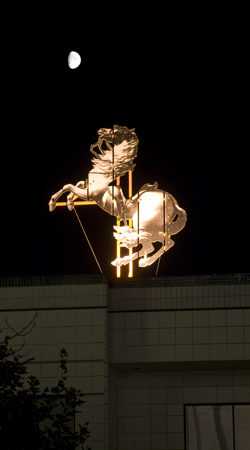 Steve Turner Contemporary is pleased to present Eighteenth Brumaire, a sculptural installation by Steven Bankhead that sits atop the gallery building. It utilizes the materials of billboard construction (steel armature, plywood and printed image), and stands nearly ten feet above the roofline and faces Wilshire Blvd. and LACMA. The image is appropriated from Jacques Louis David’s painting, Napoleon Crossing the Saint-Bernard Pass (1801), which shows Napoleon astride a white stallion that is rearing back. Bankhead’s image consists of the horse cut out from its surroundings with most of Napoleon cut off as well–he is shown from the knees down.

Napoleon commissioned David to create a painting showing him crossing the Alps in order to propagandize his successful 1799 coup d’état (also known as the Eighteenth Brumaire). It is interesting to note that while Napoleon had actually crossed the Alps by mule, he requested that he be portrayed “calm upon a fiery steed.” The “Eighteenth Brumaire” would later find new life in Karl Marx’s 1852 essay, The Eighteenth Brumaire of Louis Napoleon .   Referring to Napoleon I and his nephew Louis Napoleon, this text contains one of Marx’s most frequently quoted passages, that history repeats itself, “the first as tragedy, then as farce”. It is also worth noting that this text best states Marx’s views of the capitalist state.

Born in 1971 in Augusta, Georgia, Steven Bankhead earned a BFA at Auburn University (year) and an MFA at Otis College of Art and Design (2001). He has had solo exhibitions at Emma Gray HQ, Los Angeles (2011); Circus Gallery, Los Angeles (2008 & 2010) and at Galerie Andreas Binder, Munich (2009). His work explores themes of the avant-garde and its revolutionary spirit, engaging in both their successes and failures.