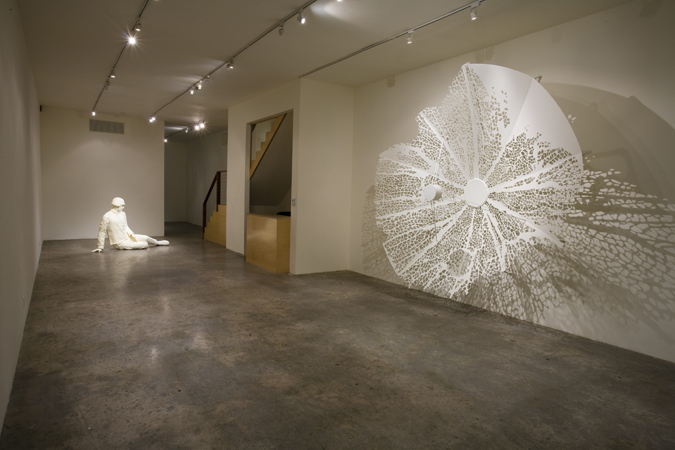 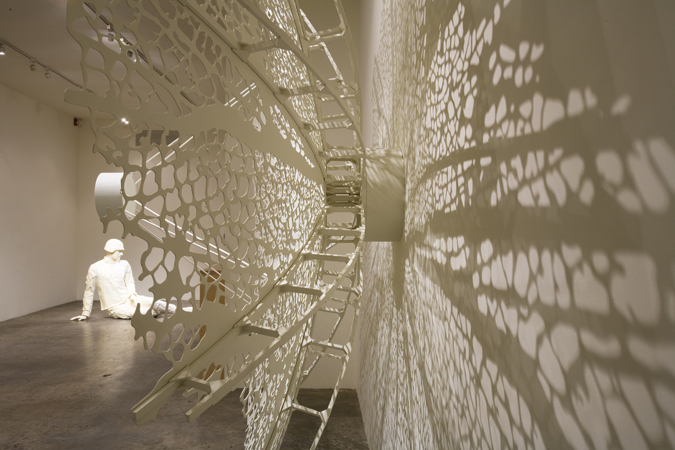 Steve Turner Contemporary is pleased to present THE BIG FOUR featuring four sculptural works by four Los Angeles-based artists: Michael Decker, Liz Glynn, Jed Lind and Jacob Yanes. Unlike artists who make serial work and who might produce numerous works in a single day, these four artists put many months-even years-into a single work. While the resulting works are made of different materials and with different processes, they share an impressive aura of quiet magnificence.

Michael Decker’s work, Old Growth, 2010, is a site-specific sculpture that will spontaneously take its form when it is installed at the gallery. It consists of scores of found metal ironing boards that were designed in the 1950s and have been collected by the artist over the past year. The ironing boards, while purely utilitarian in origin, conjure up references to California’s artistic and cultural heritage. They can be seen as painted panels, minimalist monoliths or surfboards. They also have a mysterious array of hole-patterns, remnants of their original function, which when seen together, suggests a secret language contained within.

Decker is a sculptor and installation artist who works primarily with found everyday materials. Previous works were comprised of Beanie Babies, pine cones, pillows, blankets and animal bones. To reflect the urgency of our recessionary times, Decker chooses materials that are accessible, adjustable and portable, enabling him to configure his sculptures under a broad range of circumstances.

Liz Glynn’s new installation, Untitled (Shaft) is part of an ongoing series of works using the architecture and archaeological history of the Great Pyramids of Giza to explore notions of object fetish, superstition, and the desire to cheat death. Exploring notions of scale, and the impossibility of comprehending a monumental work from a single viewpoint, Untitled (Shaft) positions the viewer inside a steep vertical tunnel modeled after the structures inside the pyramids rediscovered by the savants of the Napoleonic era.

Combining strategies of performance re-enactment with installation, Glynn’s work explores the ambition of empire and the pleasure of ruin. Drawing upon historical references, her practice embodies cycles of growth and decay by demonstrating process, encouraging participation, and inciting future action.

Jed Lind began creating Captain Midnight in 2009 with the idea of making a low noise satellite receiver as described in the “how to build your own satellite receiver” books from the early 1980s. He first created a wooden replica of the typical ten-foot satellite receivers found throughout North America and then began to cut away at its solid form in the pattern of a piece of fan coral. His challenge was to cut away as much of the wood as possible without compromising the structural integrity of the dish.

Lind positions his studio practice at the intersection of sculpture and photography, and likens the positive and negative of Captain Midnight as a perfect example of this fusion. His works often relate to his personal heroes-idealistic and visionary thinkers-including John Muir, Robinson Crusoe, Alexander Graham Bell, Buckminster Fuller, August Strindberg and Bas Jan Ader, and many of Lind’s works, whether sailing vessels or domes, are symbols closely associated with one hero or another.

Born in Toronto in 1978, Lind earned a BFA from Concordia University, Montreal (2002) and an MFA from California Institute of the Arts (2004). His work has been featured in solo exhibitions at Jessica Bradley Art and Projects, Toronto (2005 & 2008) and in group exhibitions at the Claremont Museum of Art (Suspended Between Laughter and Tears, 2010); The Power Plant, Toronto (Universal Code, 2009); and Shoshana Wayne Gallery, Santa Monica (No Man’s Land, 2005).

Jacob Yanes started working on Soldier during his residency at Skowhegan School of Painting and Sculpture in the summer of 2008, and he completed it in April 2010 after a seven-month residency at the Provincetown Fine Arts Work Center. Soldier is an over-life-sized representation of a contemporary American soldier. The pose is an amalgam of two historic sculptural motifs, the Dying Warrior and the Odalisque. In scale and subject matter, the work is overtly heroic; yet through a sexualized vulnerability, the relaxed comfort of the hero is displaced by unease and culpability. The white plastic material invokes, then resists the expectations suggested by a medium such as marble or bronze: polyurethane is at once artificial, warmly human, palpably thick and strangely hollow.

Yanes uses the form of classical sculpture to consider human behavior. His single figure sculptures convey a complex mix of character traits and emotions. By adjusting pose and gesture and by altering materials, Yanes creates works that show the dilemmas and struggles inherent in existence.

Born in Yonkers in 1974, Yanes earned a BA at Brandeis University (1996); an MFA at UCLA (2008); and has had residencies at the Skowhegan School of Painting and Sculpture (2008) and the Fine Arts Work Center, Provincetown (2009-10). His work was included in Selections from the Hammer Contemporary Collection, Hammer Museum, Los Angeles (2010); FAWC Fellows Exhibition, Provincetown Art Association and Museum (2010) and Some Young Los Angeles Artists, Cardwell Jimmerson Gallery, Los Angeles (2008).