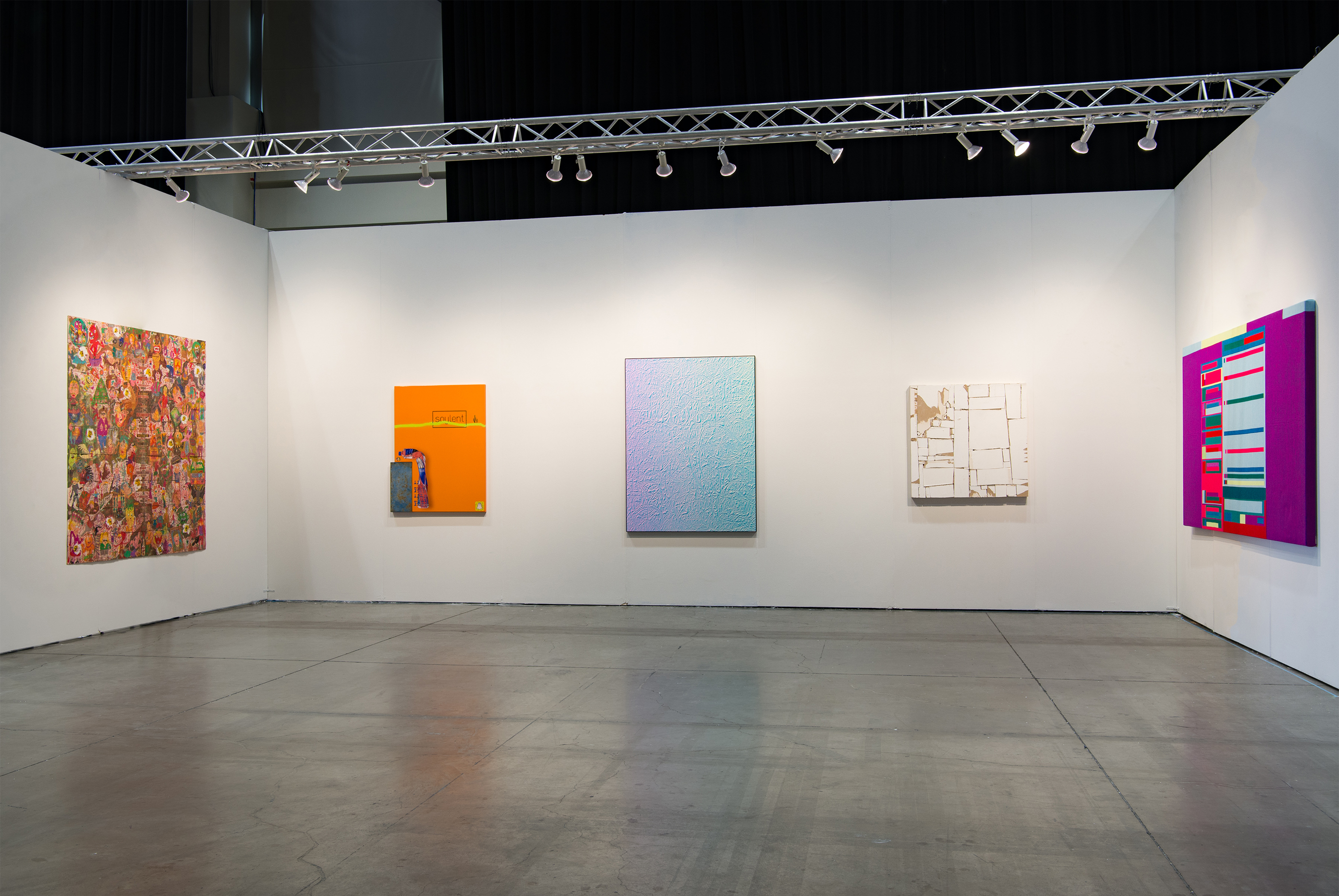 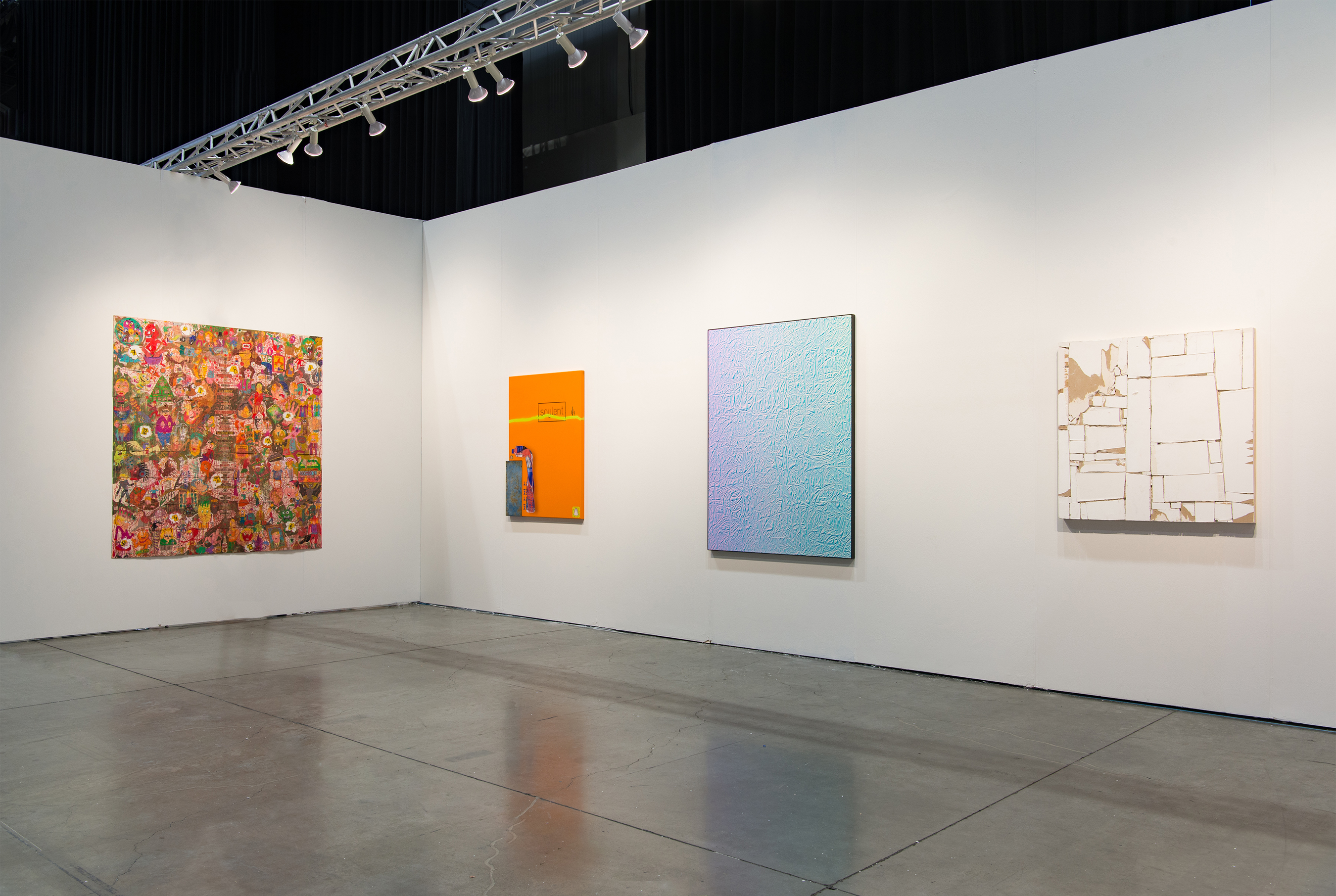 Steve Turner will present works by Pablo Rasgado, Camilo Restrepo, Rafaël Rozendaal, Michael Staniak and Yung Jake when it exhibits at the Seattle Art Fair for the first time.

Pablo Rasgado will present a painting from his Unfolded Architecture series. This painting is composed of drywall fragments Rasgado collected following the demolition of walls at a temporary museum exhibition. Rasgado “unfolded” the three-dimensional space by mounting it to a flat rectangular panel.

Camilo Restrepo will present a large-scale drawing that is inspired by his lifelong proximity to the epicenter of drug-related violence in Colombia. A Land Reform 10 is comprised of individual sheets of paper that were torn from the artist’s drawing book, crudely taped together, drawn upon in ink and water-soluble pigments; damaged by violent streams of water; and then reconfigured, repaired and reworked. The drawing is covered in collaged newspaper clippings and cartoon-like characters that are based on the aliases of narco traffickers as reported daily in Colombian newspapers.

Rafaël Rozendaal will present a Jacquard weaving whose colorful abstract composition is based on the underlying structure of Facebook. Rozendaal developed a plug-in that translates any website into its abstract architectural form. He likens pixels on a computer screen to stitches on a weaving and uses bright colors to achieve maximum impact.

Michael Staniak will present a painting that appears to be digitally printed but is actually created entirely by hand. He drew gestures similar to those one might make while using a touchscreen device into casting compound and then painted luminous shades of pink, blue and yellow to create the illusion of a flat surface that glows like a computer screen.

Yung Jake will present a new painting that consists of found metal fused with a powder-coated steel panel on which he has both painted and printed symbols of his online and offline worlds. The central image is a 3D-rendered twisted Fiji Water that relates to the artist’s interest in contemporary lifestyle and branding, social interactions and consumption habits.

Michael Staniak (born 1982, Melbourne) earned a BFA and an MFA from the Victorian College of the Arts, Melbourne. He has had solo exhibitions at Contemporary Art Museum, St. Louis (2015); Annarumma Gallery, Naples (2015); and Steve Turner, Los Angeles (2014 & 2015). His work has been included in group shows at The Moving Museum, Istanbul (2014) and Kunsthalle Vienna (2014 & 2015). The Contemporary Art Museum, St. Louis will publish a monograph later this year.

Established on the Internet in 2011, Yung Jake earned a BFA at CalArts in 2012. He is best known for his rap videos that integrate the worlds of hip-hop, technology, social media and contemporary art. Datamosh (2011) parodied the trend in music video of datamoshing (a digital technique that distorts images) while playing to a contemporary digital art audience. In E.m-bed.de/d (2012), he commented on the pursuit of Internet fame. Since 2014, Yung Jake has developed a series of paintings that combine the permanence of steel with the ephemerality of new media. Yung Jake has had three solo shows with Steve Turner (2014, 2016) and a solo project at Art Berlin Contemporary (2014) and Art Brussels (2016). His work has been screened at Sundance (2013) and he has performed in Los Angeles at the Hammer Museum and REDCAT (2013); Museum of Contemporary Art (2014), J. Paul Getty Museum (2015) and in New York at MoMA (2016). He will have a solo exhibition at Zona Maco, Mexico City in 2017.