Vivid Paintings That Shape-Shift as You Walk by Them 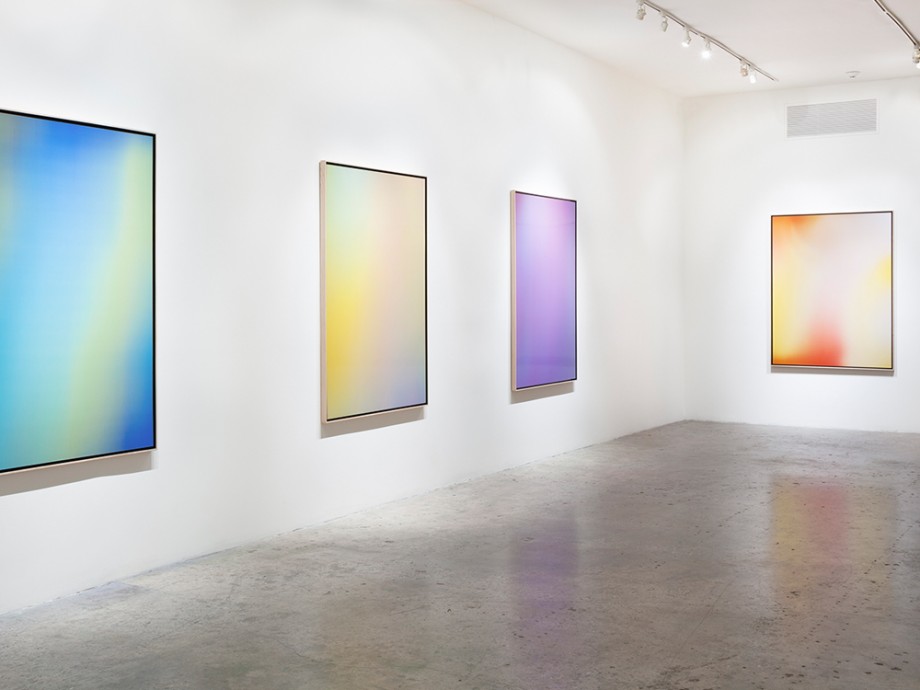 Artist Rafaël Rozendaal is best known for his colorful, abstract website artworks. For a series of new images, however, he makes use of an old-school technology best known for its use in baseball cards.

Remember those funky, ridged cards where it looked like the slugger was swinging a bat when you turned the card slightly to and fro? That’s lenticular animation. It’s what our grandparents had instead of animated GIFs. But Rozendaal thinks of it as a modern medium. “A lenticular painting is like a very specialized single purpose computer,” he says. “As you stand in front of it, it is computing an equation. The algorithm consists of the four frames, the possible outcomes are infinite. It’s a computer that does not need electricity to run.”

Each of these paintings starts like a piece of software. Rozendaal defines the shapes and colors that make up the composition and scripts their transition. Four key frame images are selected and specialized software slices them into strips just a few pixels thick and interlaces them. This images is printed on a special sheet of plastic with ridges that act like lenses, exposing each of the four images sequentially, and creating the animating effect.

Rozendaal is an accomplished young artist whose work has been exhibited at the Centre Pompidou in Paris and the prestigious Venice Biennial. He’s lectured at Yale and the École beaux-arts. And aside from these protean “paintings,” his oeuvre exists almost entirely online.

nspired by the fact that people travel to far-flung galleries and conferences to learn about art and invariably end up looking at their phones, he thought he should make art that lives there. “We’re creating a universal library, so I’m going to make works for that universal library,” he says. When you visit one of his sites, “you’re not looking at an image of the work, it is the work,” he says.

Many of his works are vivid abstract animations that respond to the position of the viewer’s cursor on the screen. One of these, TextFreeBrowsing.com, is a Chrome extension that strips websites of their words, turning Google into a simple logo and Twitter into a stream of faces and icon. AlmostCalm.com, is a game-like experience where a user moves an image of a circle on a field. Line it up perfectly and gradients in the two spaces converge and the screen becomes one color.

PleaseLikeMe.com is simply a website that asks people to like it, and so far, 192,360 patrons have. “I felt the Like Button was really an icon of our times, of our online attention,” he says. “I thought maybe I should make painting of it, maybe I should make a drawing of it. But no, that’s not the Like Button. The like button is a dynamic thing that changes all the time.”

Rozendaal has developed over 100 works of art and his virtual gallery draws about 35 million visitors per year, more than the Louvre.

He’s not a designer, or UX specialist, but rather a poet who uses pixels and URLs instead of iambic pentameter. “I try to focus one interest into one work, I finish it and put it into a domain name,” he says. This practice makes it easy to stage a right-click retrospective through his work, but also creates value.

Anyone can load his webpages, but each URL can have only one owner. When he sells one of the works, as he did at the auction last fall, the owner’s name is added to the browser’s title bar, like a plaque that accompanies a donated sculpture in a public park.

His move to physical works grew out of experimentation with lenticular printing, the evolution of his digital portfolio, and simple creative desire. “There are ideas to explore that don’t fit in a browser window,” he says.

Rozendaal’s projects, both physical and digital, are computational compositions where the user and the work contribute to the final experience. He says the works are never finished, and it’s this infinite potential that attracts him to projects. “I always say I create fountains or waterfalls,” he says. “They’re always doing the same thing, but not really.”