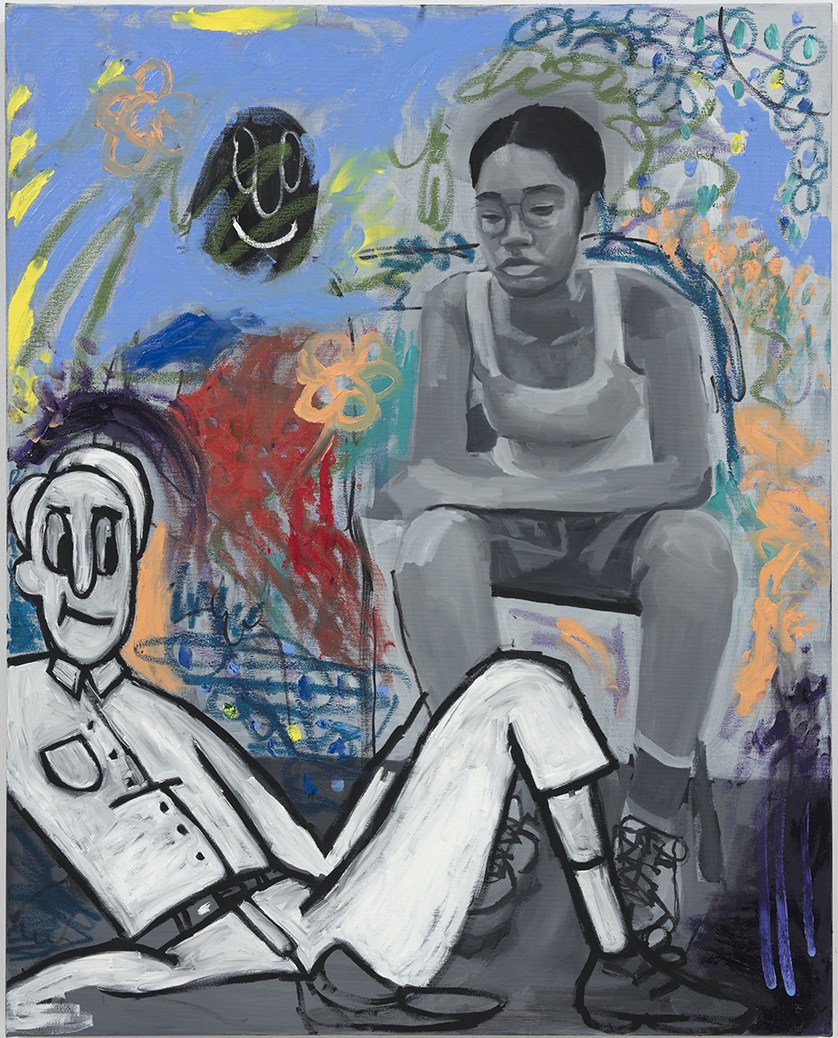 Brittany Tucker (b. 1996, Brooklyn) creates paintings that combine her own likeness with that of a cartoonish image of a generic white man. She misrepresents the white figure in order to address the uneasy relationship between American blackness and whiteness and to offset the stereotype characters from minstrelsy. By rendering herself realistically, she makes herself the primary subject while the white man is the joke of the painting. The awkward situations highlight the growing divide between the races and the sexes in the post-Obama Trump era.

Tucker received her BA from Bard College (2018) and has since participated in group shows in Miami, New York and Stockholm in addition to having two solo exhibitions with Steve Turner.  The artist now lives and works in Vienna. 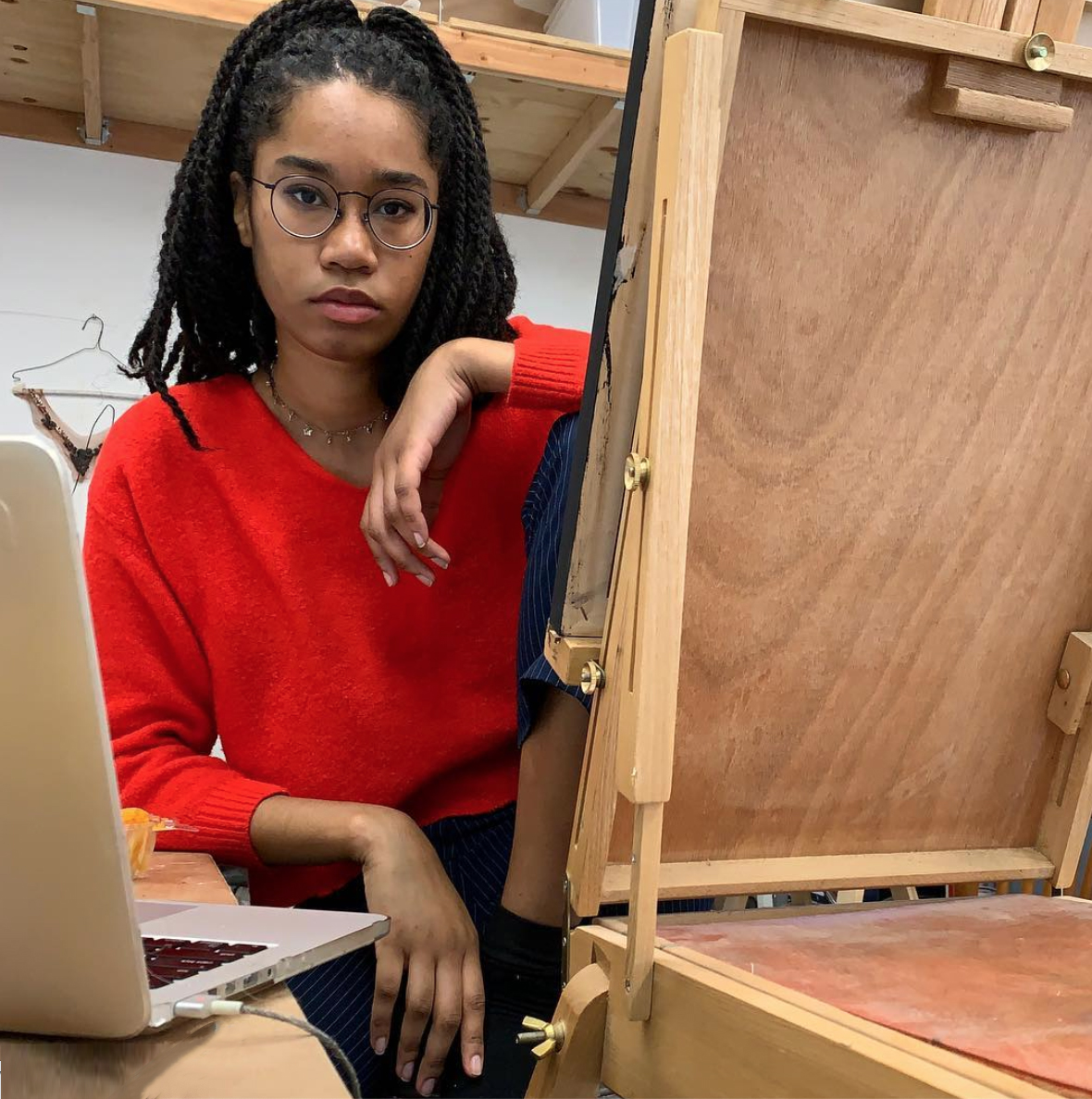 Brittany Tucker in conversation with

I’m catching you in Vienna right now. What is your work space like there right now? I understand that you got a new studio with some friends. Can you tell me about it?

My space here is great. A friend of mine asked me to join a studio she was setting up in a huge old apartment with four other women. It was pretty much completely covered in dusty wallpaper, and the floors were covered in carpet glue. It took a few weeks to get it set up, but it was totally worth it because now I have a cheap, comfortable studio. And the best part is that the building is going to be gutted in three years, so we can do anything we want with the space. I’m going to use that freedom to start practicing some murals on the wall. 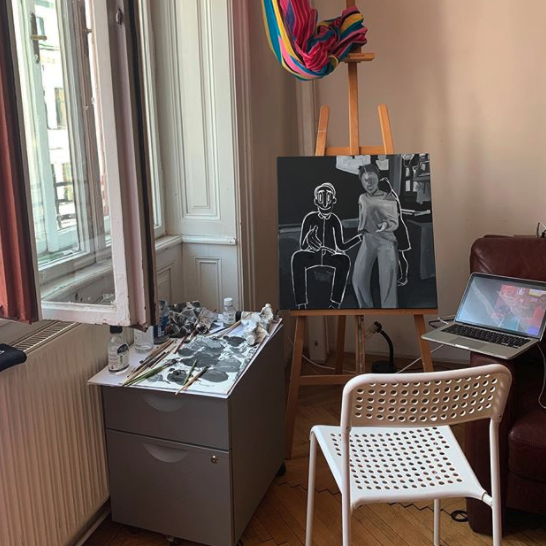 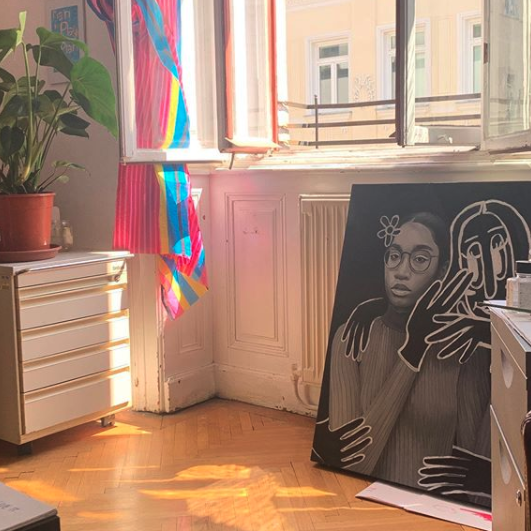 That sounds so great! Have you ever done murals before?

I have done two small murals. One for my thesis at Bard College and one last year for Spring/Break Art Fair. 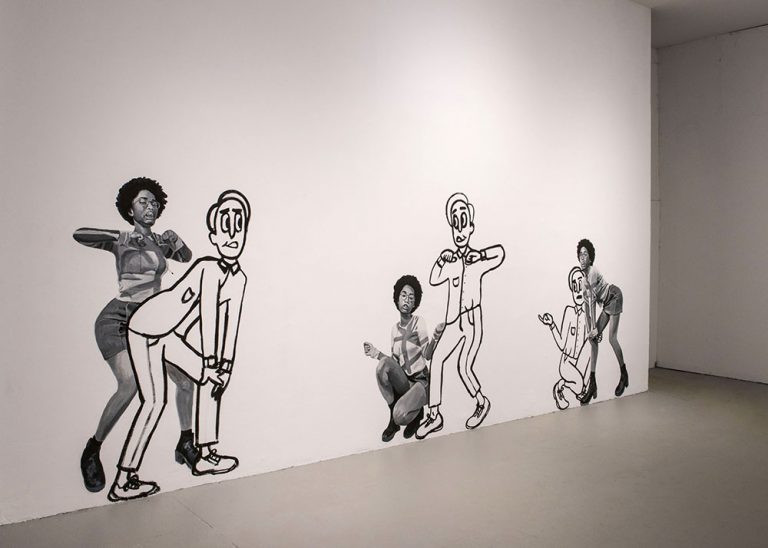 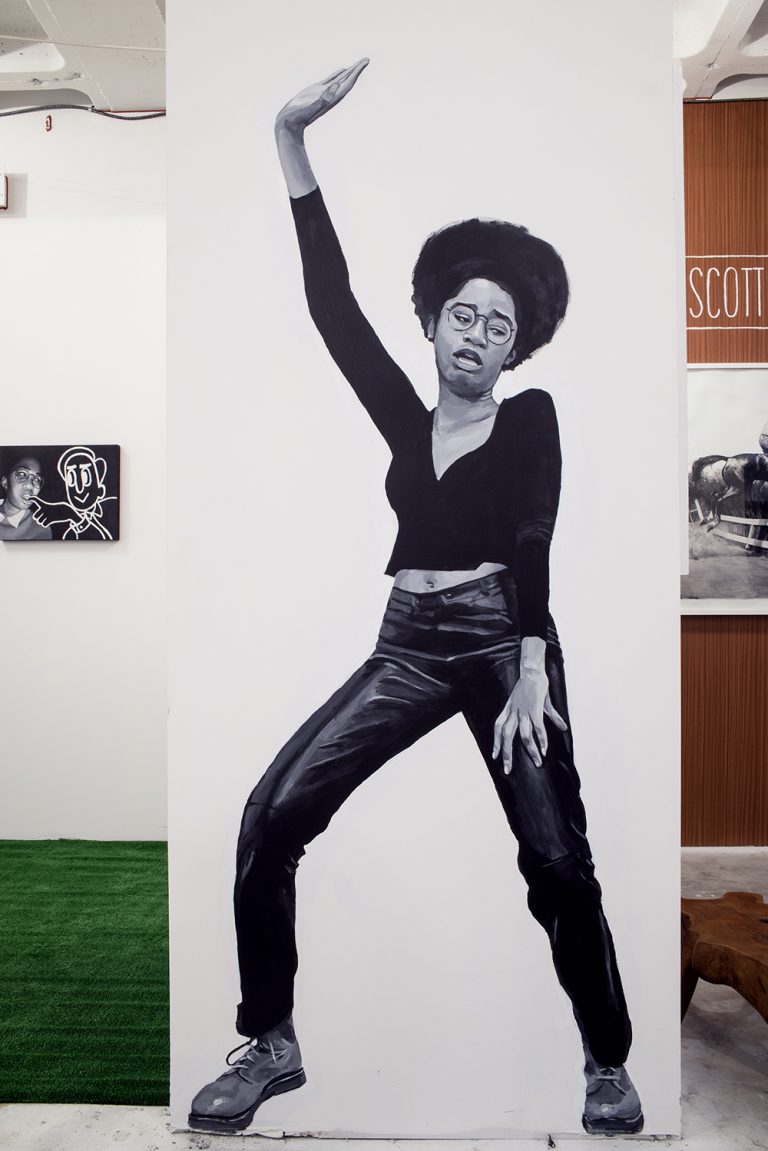 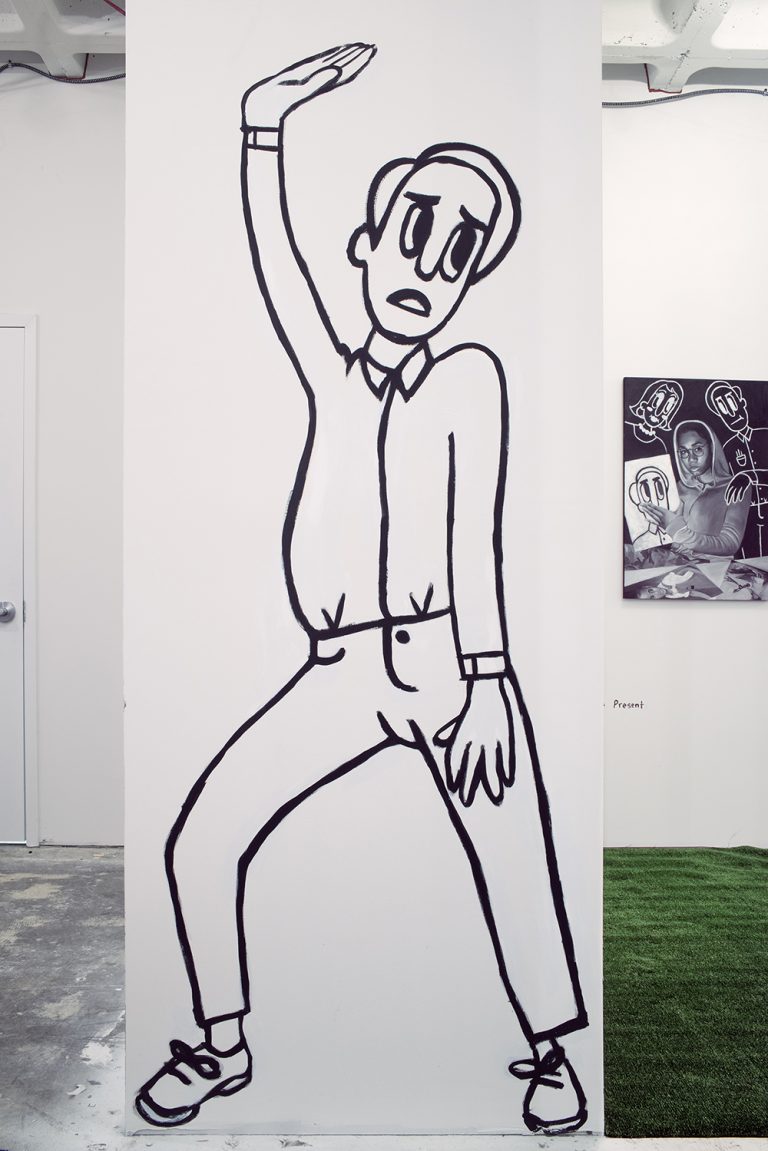 Aside from murals, what is your work process like? My best guess is that you work from photographs, often selfies. Are they more like casual snaps or something you set out to photograph with focus and intent?

I do work from selfies and self portraits a lot of the time. I feel weird using other people’s photographs, even if they are of me. I like to do a mix of casual snapshots I take while out doing other things, and posed photographs I set up and take of myself on timer. I’ll crop the image in photoshop based on the canvas size I want to use. Then I’ll just paint from that image on my computer. I almost always paint from a color image.

Is there a reason you mostly paint from color images? I wouldn’t have guessed.

There is a lot more content in color images than in black and white. It’s more of a challenge, as well. The painting comes out more interesting that way. 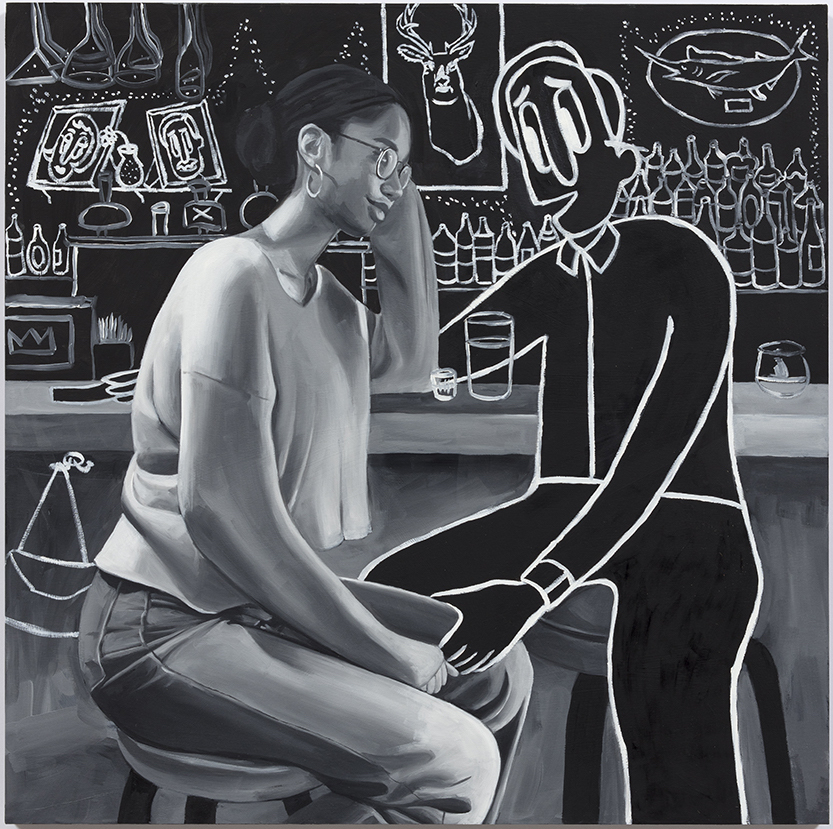 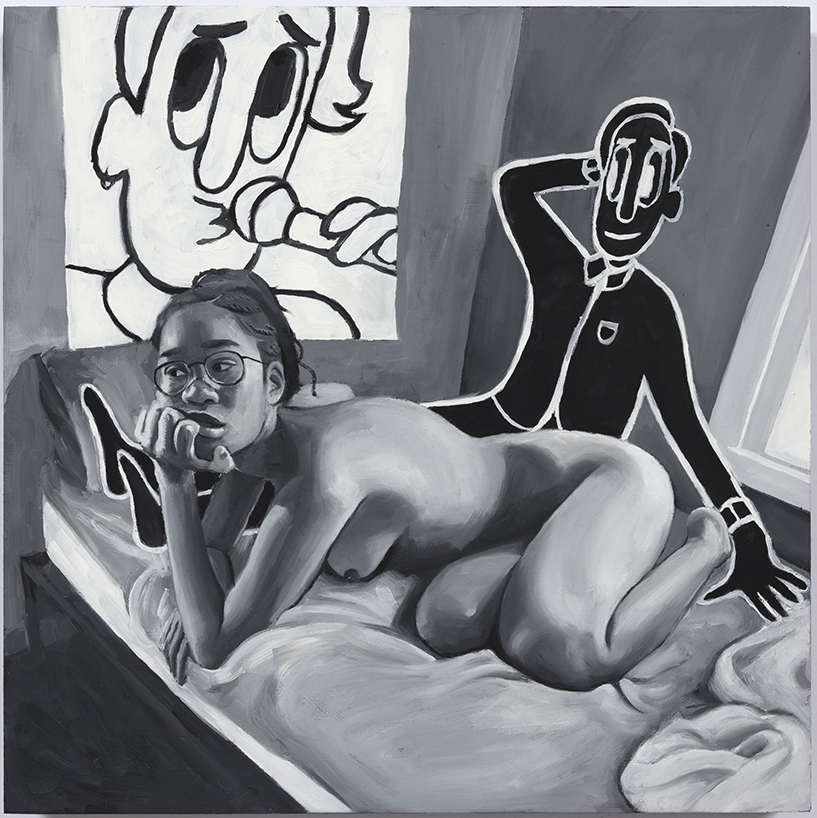 You paint with a pretty pared-down color palette. That reminds me of the way grisaille has been used to mimic statues, but also of painters like Amy Sherald. Do either of those references have any relevance for you? What initially led you to working in shades of gray?

The black and white did begin as a grisaille. I was in my senior year of undergrad and I had gone to Paris the summer before to visit family and had been really touched by some of the paintings I had seen there, in particular Les Énervés de Jumièges by Évariste Vital Luminais and La Naissance de Vénus by Bouguereau. I wanted to mimic their smoothness and their skin tones. The black and white ended up working well with the subject matter I wanted to paint–race and identity. The joke is that it’s “black and white.” I like dramatic scenes in painting.

Amy Sherald is an incredible painter, I wish I could say she inspired me to start painting this way, but I didn’t find her work until she painted Michelle Obama’s portrait. 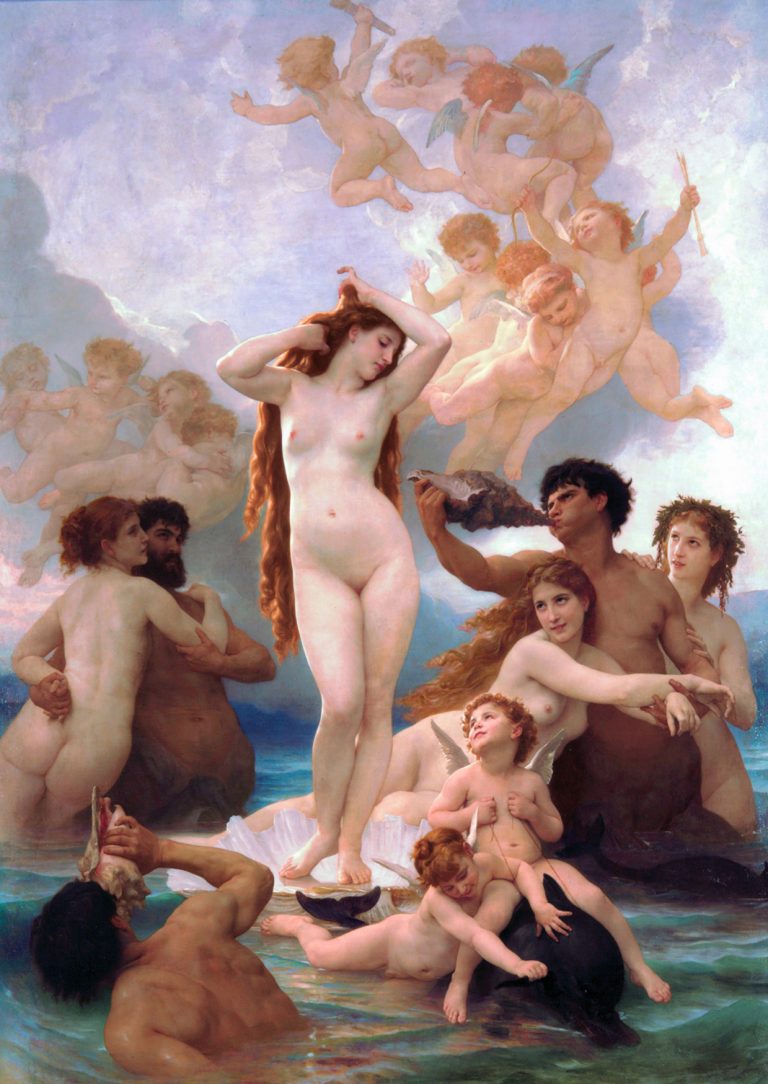 "I wanted to mimic their smoothness and their skin tones. The black and white ended up working well with the subject matter I wanted to paint–race and identity."

Your recent show with Steve Turner looked like a departure from your previous work. I’ve seen mostly black and white paintings from you, but now there were drawings and there was color. The cartoon character has stayed, though. Can you talk a little bit about him and what he represents? I am especially curious to know more about the contrast between him and the more realistically painted female figure, who, as far as I can tell, bears a resemblance to the real-life Brittany Tucker.

The cartoon character has been evolving for me. It’s intentionally a bit transitional. It allows me to touch on a range of topics with these paintings. They are a way to explore identity, and the character represents the things I’m not, but also the things I’m supposed to be. It’s in a way, an American figure for me, while also being a male figure, and a white figure. I’m American. So we have that in common and we inhabit the same space.

How would you describe the emotional presence of that character? I’m asking this because I find him to be pretty anxiety inducing!

The emotional presence is definitely meant to be unnerving. In a way it mirrors the anxiety of living in a place where things are stacked against you, and the way you’re forced to try and get into the head of white people. A lot of the time, especially growing up, there is this sense of white surveillance. Whether in a store, at school, a job or even on the street by the police, I always felt and still feel the need to try and get ahead of the discrimination by getting into their heads. But in the paintings, the character is very ambiguous… you can’t always tell what he’s thinking and that’s scary. 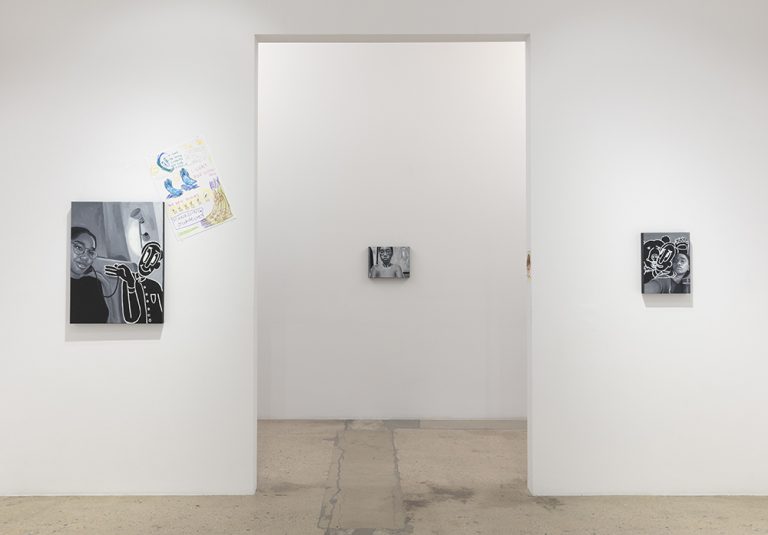 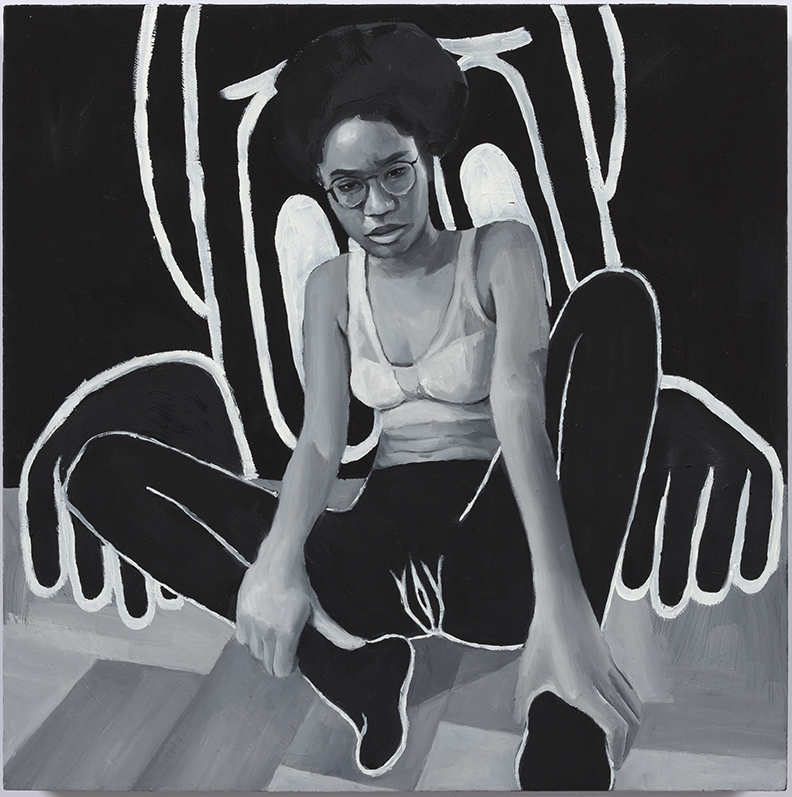 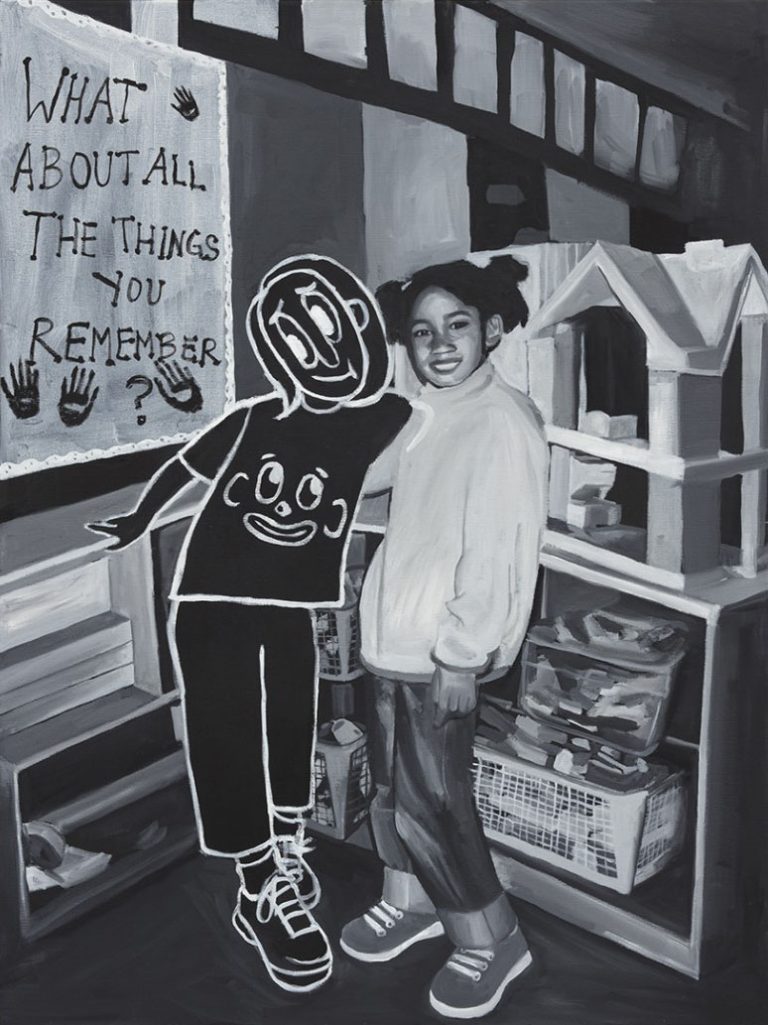 What about the drawings – you told me earlier that they are more personal than the work you’ve done previously, kind of diary-like. Why did you decide to include them?

Do you have a practice of drawing every day? In what sort of situations do you usually produce drawings?

I draw pretty often, but not every day. I usually just draw sitting on the ground, whenever I want to. 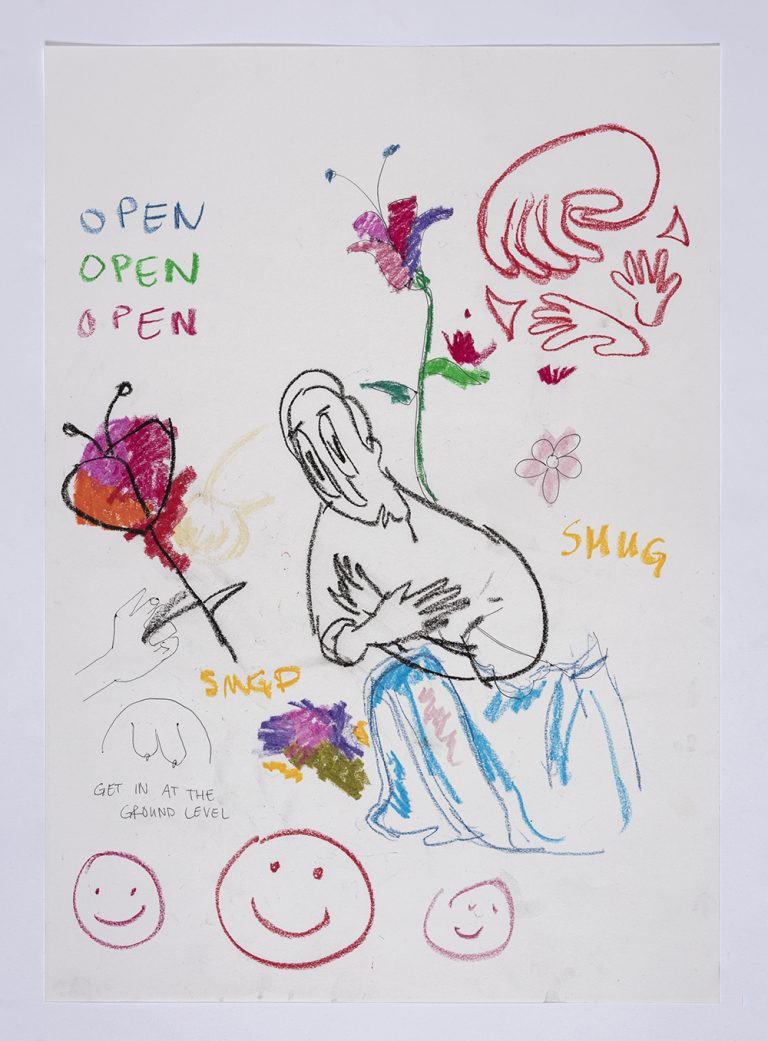 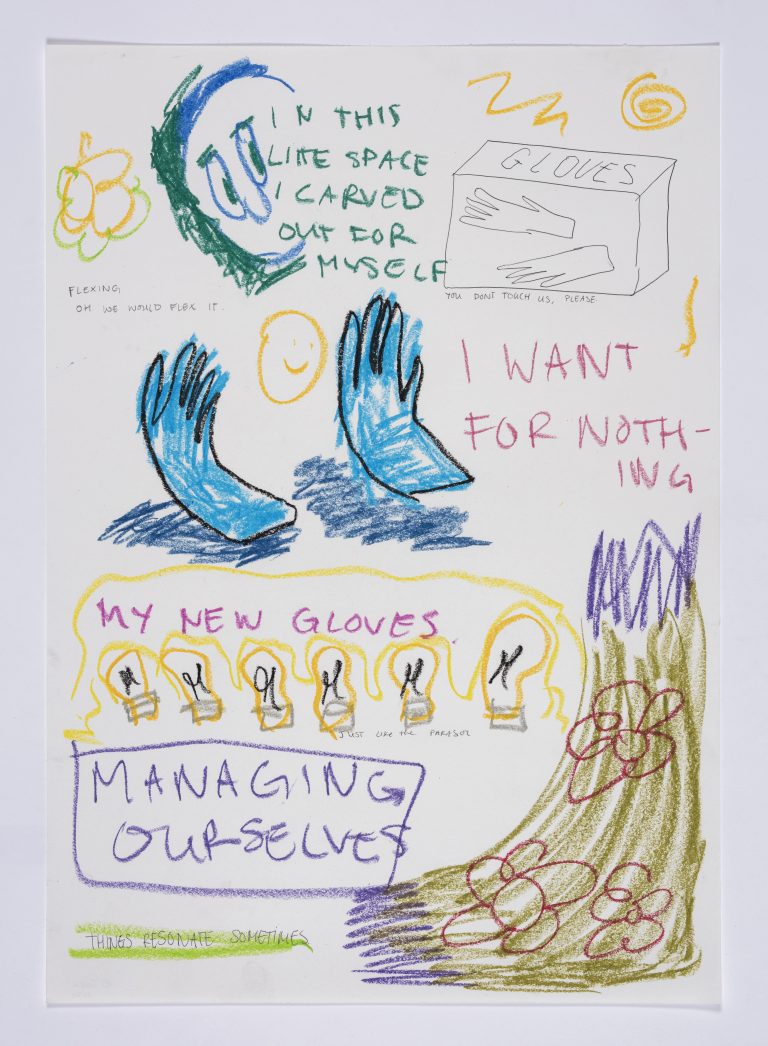 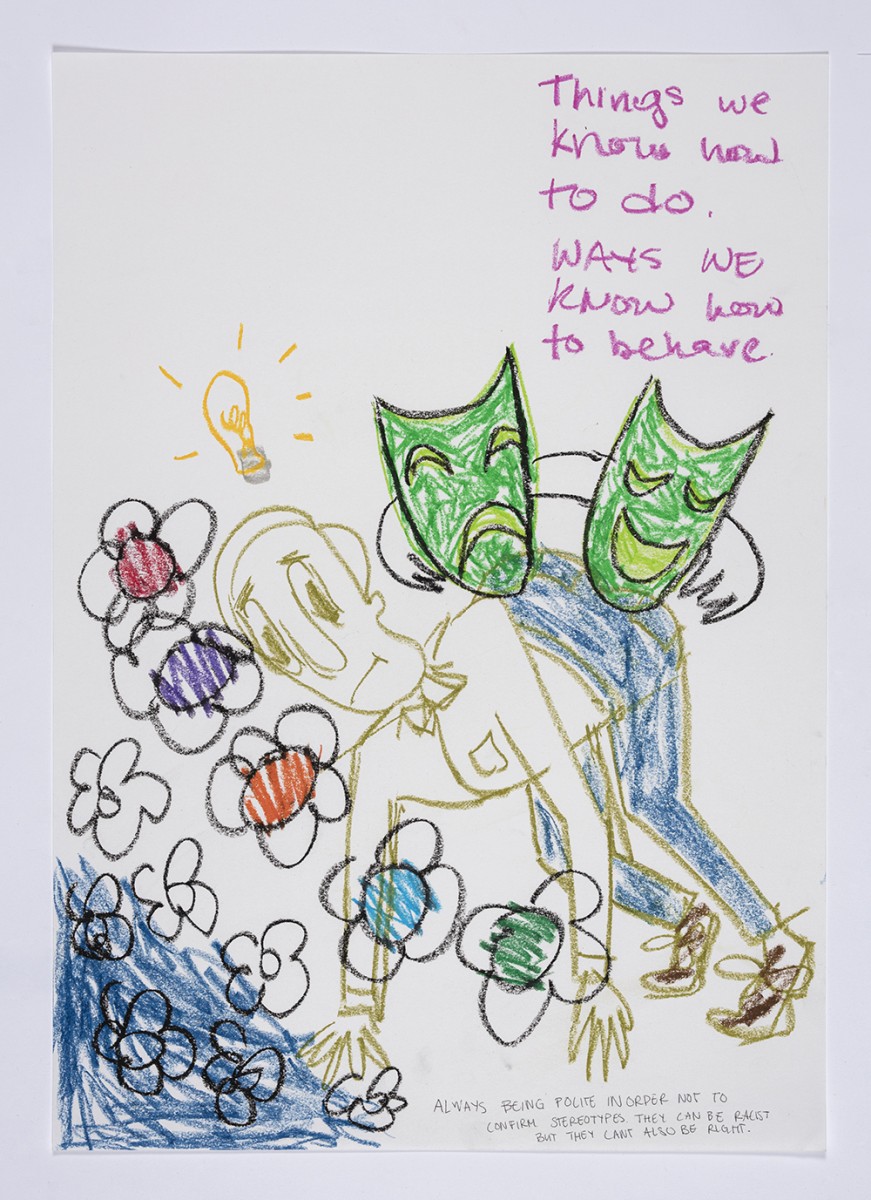 In general, how do you feel about personal vs. greater societal issues when you’re painting? I think you said earlier that you want your painting to be a commentary on greater issues, issues outside yourself?

I look for meaning that is universal as well as specific to me. Most of the issues that I address are greater societal issues that are still very personal for me. To be honest, when a young Black girl goes to a museum there is usually not a lot of work there that she can relate to. It’s hard to relate to work that purposely excludes you. So for me, the art that I can, and could relate to and see myself in was rare, and that gave it extreme value. That value of relatability eclipses a lot of other concepts and reasons for making art. Relatability is a priority. The ability for people like me to identify with my work is a priority.

"I look for meaning that is universal as well as specific to me." 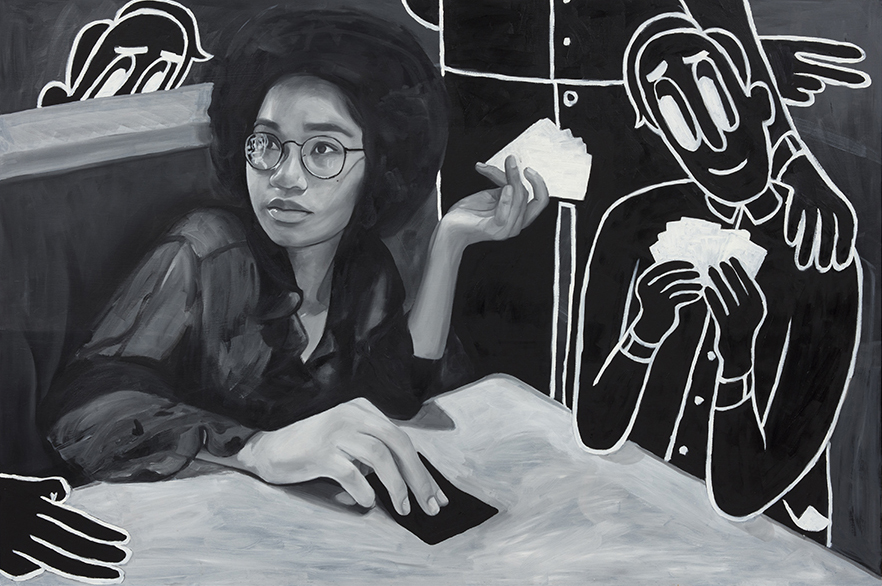 That’s such a good answer. What artworks were important and relatable for you when you were growing up? 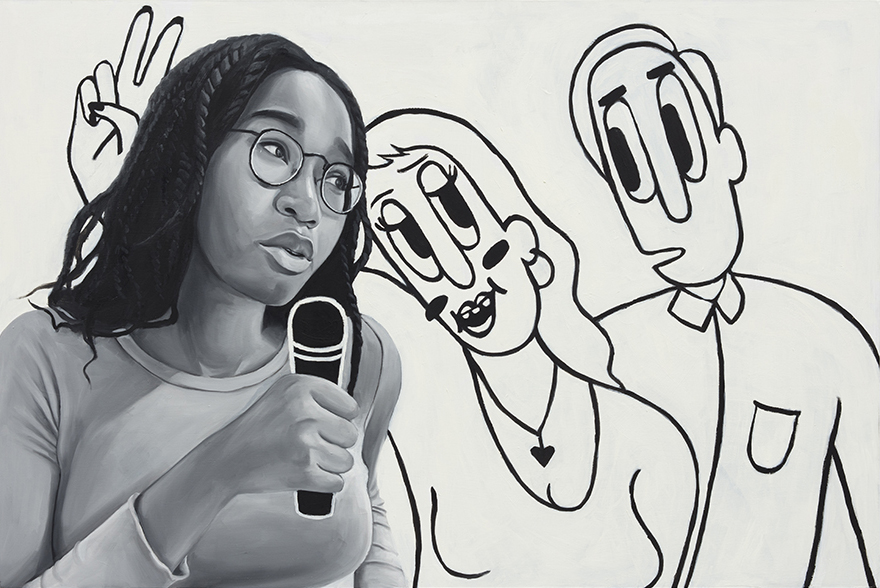 I often see a fair bit of humor in your work, but earlier this week we also talked a little about how many of the paintings also reference partying and self-medicating and trying to be okay. How does that tension work for you? Or am I completely off track in seeing some humor there?

There is definitely humor in my work. Drawing attention to the absurdity of a situation is sometimes the only valuable way to talk about it. Some things aren’t nuanced or complex enough to warrant any other analysis. Sometimes things are just absurd and funny. Racism in America at times can be like that, and at other times it is absolutely not. 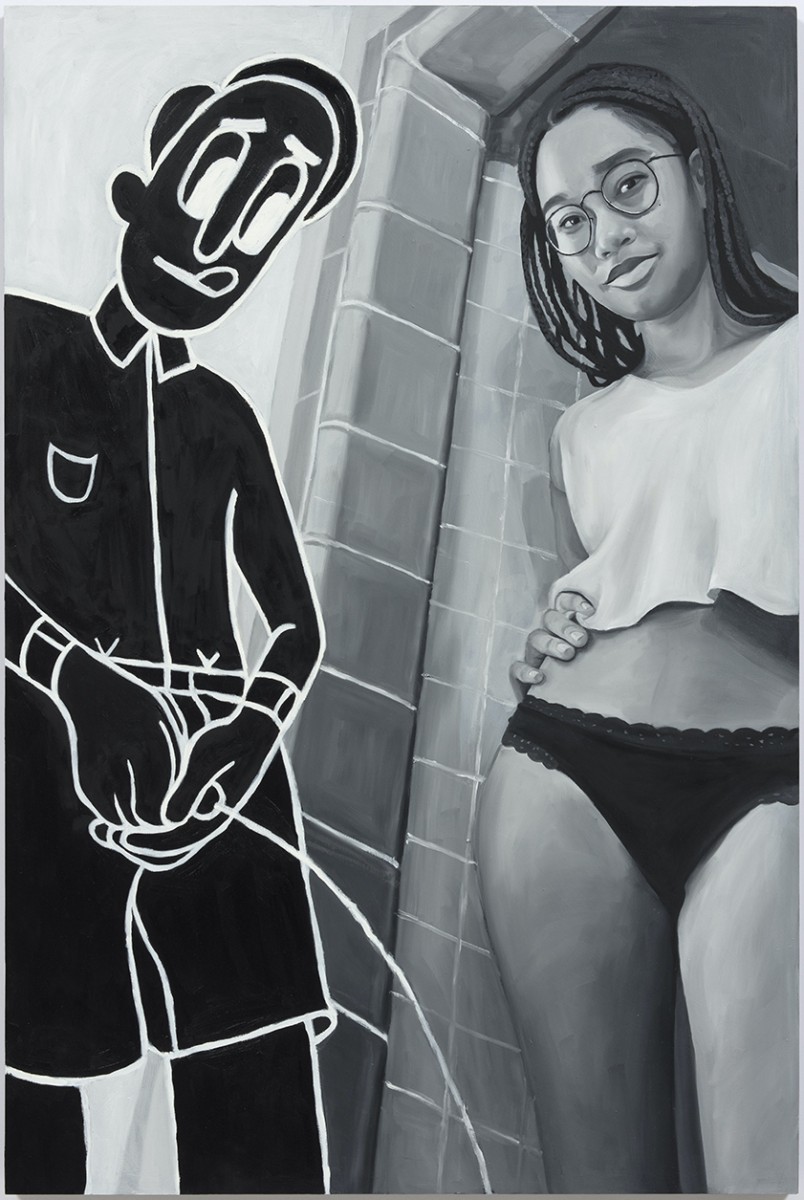 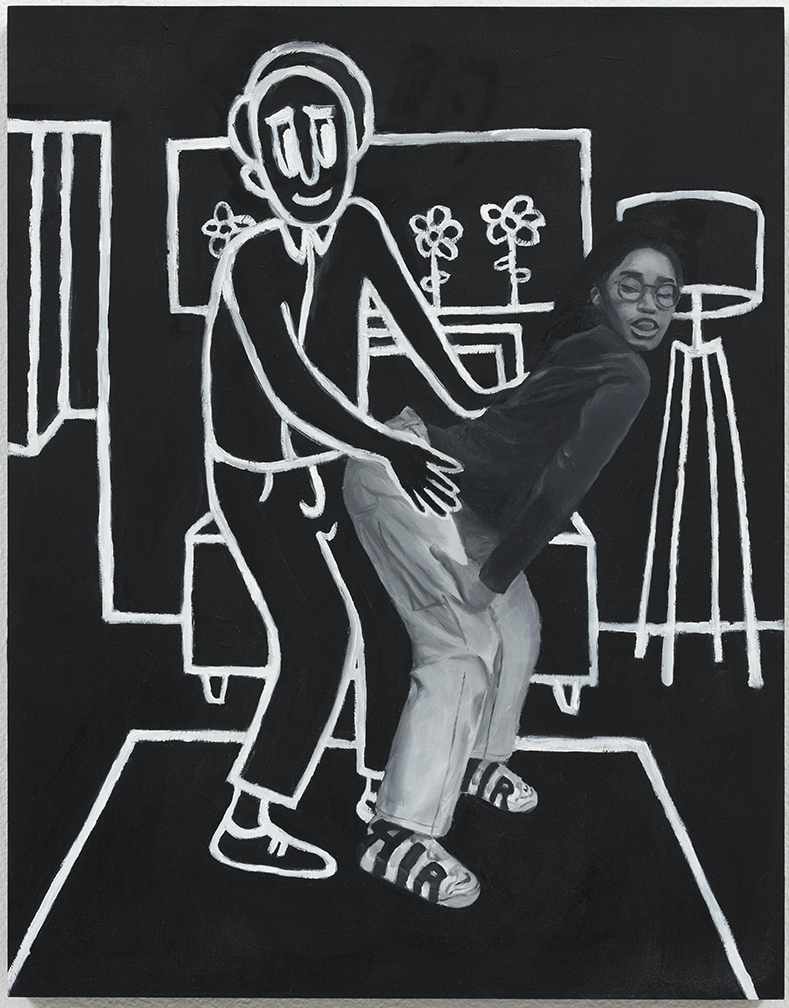 My experience of Vienna is pretty white and Germanic. I’m wondering if you feel more or less American when you’re there? Or more or less Black?

I do have a weird level of visibility here that I’m not used to. I don’t feel particularly American. I don’t think that people associate me with the negative aspects of America as much as they do with white Americans. However, I’m much more tuned in with America right now. Because I’m away, it’s easier for me to get drawn into all of the terrible things going on in America. When you’re there, you need to protect yourself a bit more from the bad news.

Oofff, I imagine a lot of late night news binging. Take care of yourself & don’t go too far down the rabbit hole!

What are you working on now? What are you interested in? Whatever it is, I’m really looking forward to seeing it!

I love this answer so much! Thank you.