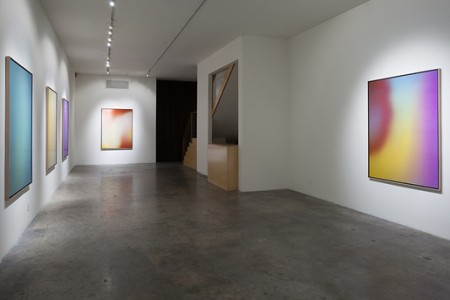 Rafaël Rozendaal may not be pushing the technical boundaries of new media, but he is employing new media very effectively to push the experiential boundaries of what we regard as pre-digital imagery. His new series of lenticular paintings claim the same wallspace as “traditional” abstraction, and from any angle appear to be reiterations of color-field practice (if often scored with straight-edge “creases” or “holes”), warmly saturated with resonant clouds of color. The merest movement on the viewer’s part, however, causes dramatic shifts in hue, form, structure, and density; a shift of two feet can prompt a whole new exhibition to emerge. This would be just so much delightful trickery were the “paintings” themselves not entirely successful as gorgeous, expansive veils, every bit as seductive as a mid-60s Olitski or a prime example of the “lyrical abstraction” that grew out of color-field practice. In a funny way Rozendaal’s lenticulars bring us a step closer to Olitski’s dream of color itself suspended in air. Funnier still are the many websites Rozendaal has set up rather along the same lines: each constitutes a “painting” the way each lenticular work does, and metamorphoses over time without losing its basic formal premise. Those formal premises differ a lot more from one another than do the lenticulars; for every color-field-like composition, there is a geometric one or an op-art one or a organic-abstraction one or – going back a couple of years – a pop-art one or conceptual one or interactive one or… you get the picture. Rozendaal has been generating these websites-as-paintings(-as-performances) since 2001, and all are available on his home site. Some are gorgeous, some are rude, some are hypnotic, some are hilarious, some are biting, some… well, see for yourself here. They won’t occupy your visual space the way they did in the gallery, projected onto the wall with a visitor-operated control panel to change and interact; but even on your laptop they’ll put any mere screen saver to shame. (Steve Turner Contemporary, 6026 Wilshire Blvd., LA. www.steveturnercontemporary.com)