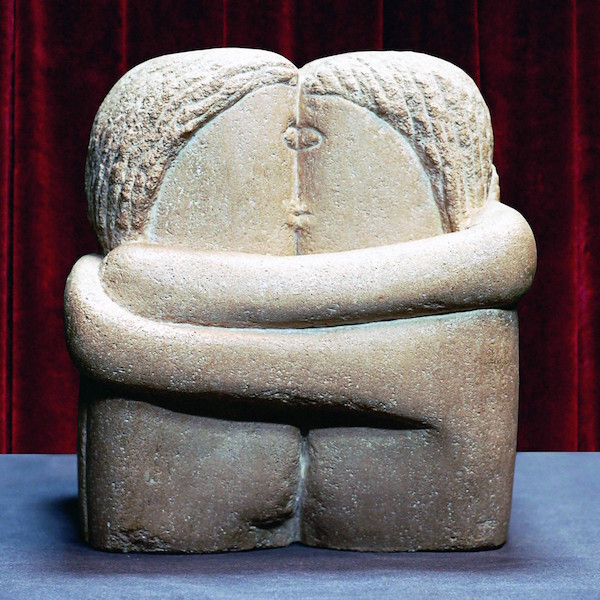 It might be cold and miserable outside, but it’s the time of the year for romance, remember? With Valentine’s Day just round the corner, pretty much everyone, including artists, can’t seem to escape the powerful spell of love and passion. Even Damien Hirst, he of the rotting animal carcasses and dead butterflies, has softened up somewhat and turned to the heart motif recently to celebrate Cupid and his fanciful use of the bow and arrow (see Damien Hirst Loves Valentine’s Day).

But Hirst isn’t alone. In the last weeks, a slew of kiss-related art projects have debuted to remind us of love’s enduring appeal as a subject for artists.

Take Much Better Than This, for example, a site-specific video installation by the artist Rafaël Rozendaal in New York’s Times Square. During February, every day at midnight, the square’s many screens are taken over by a three-minute digital animation that features a couple kissing delicately, their faces changing color every time their lips meet.

“We’re bombarded with negativity throughout the day, it’s good to give love some attention on the biggest screens in the world,” the artist told the Creators Project. 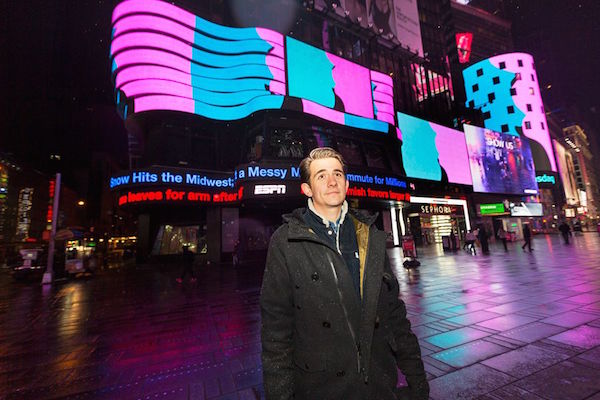 Rafaël Rozendaal in Times Square, New York, with Much Better Than This
Photo: Ka-Man Tse via The Creators Project

Rozendaal created the piece in 2006 as an online video, but its inclusion as part of the Times Square–based public art series “Midnight Moment,” has multiplied its audience massively. Each day, millions of passers-by walk through the famous New York area full of screens usually devoted to advertising.

It’s a commercial narrative the artist seems particularly fond of disrupting. “’Midnight Moment’ is really special because people don’t expect it. You can see them getting confused,” Rozendaal said. “Just as with online art, the context is ambiguous … There is no museum, so it’s not immediately clear you’re watching art. People really have to form their own opinions then, and that’s what makes it so interesting.”

Meanwhile, the master of the inconspicuous performance, a.k.a. Tino Sehgal, took over the city center of Leeds for a night last week to restage his 2002 performance This is Kiss.

The work, which is inspired by Auguste Rodin’s The Kiss (1882–1889), looks like pretty much what it sounds like: a group of dancing couples from the Northern School of Contemporary Dance kissed, frolicked, and got up close and personal in the streets across town. Only onlookers had not been warned that they were witnessing an art performance, which surely prompted the old adage “Get a room!” in more than one mind.

With This is Kiss, Sehgal joins the ranks of artists that have filled museums and galleries with smooch-based performative actions, including Orlan’s Le Baiser de l’Artiste at the Grand Palais in Paris (1977,) Marina Abramović & Ulay’s ominous Breathing In Breathing Out at the Stedelijk Museum in Amsterdam (1978,) Jirí Kovanda’s Kissing Through Glass at Tate Modern in London (2007,) and Clifford Owens’s Anthology at New York’s MoMA PS1 (2012.)

“Words may not convey it, say it with a kiss,” sang Billie Holiday in 1938. It seems like contemporary artists are more than keen to oblige. 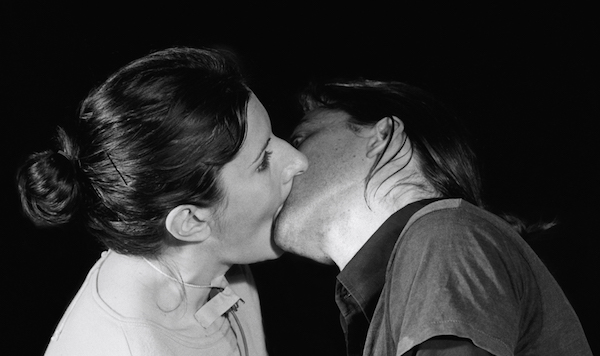 Marina Abramović & Ulay, performing Breathing In Breathing Out in 1978
Photo via: Phaidon