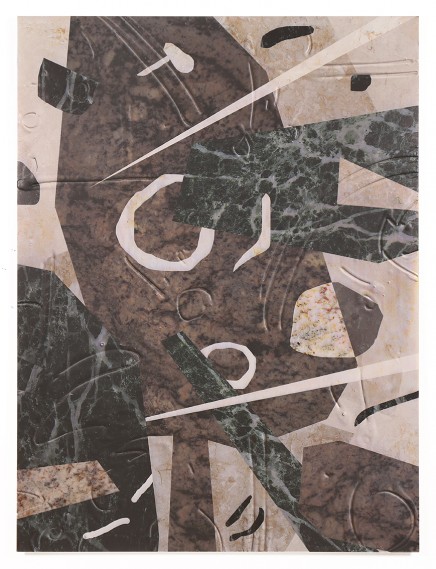 “To begin the paintings, I download a few stock images of stone surfaces from the web, which then undergo many Photoshop techniques to create a collage/painting on the screen. All of the digital drawing and shapes are made using my finger and not a mouse or stylus. This is important as I want the process to be akin with using touch screen and trackpad technologies, now the most common way to navigate digital devices. This element of “touch” is synonymous with digital media and also primitive image making. It takes the image making process back to the most carnal implementations of pigment on cave walls, where muddy mixtures were applied very physically by hand. There seems no fully logical reason why early man needed to paint, but the desire was there and still persists today. I like this aspect of painting. It has been almost unchanged for thousands of years – mixing liquid pigments and applying them to an organic surface. Of course, these pictures are initially made on the computer, but something of this elemental urge of painting still remains in using even the most physically removed of digital technologies.”