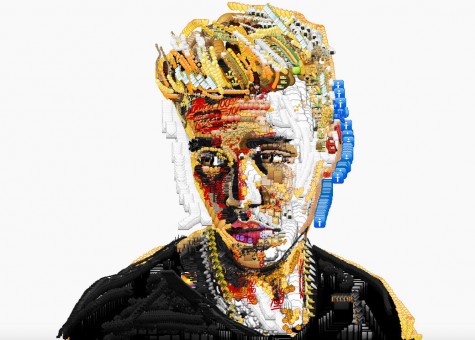 Online persona, YouTube rap star, art world darling, and then some. Whatever he is, he’s rewriting the rules for what it means to make waves in the 21st century.

Yung Jake wants to text. This is how he wants to be interviewed for his Complex feature. He won’t talk in person, over the phone, on Skype, or even via IM. He’ll text. That’s it.

This isn’t how the people we put in this magazine (or that have ever been put in any magazine, ever) ask to do their interviews. Or the kind of thing we’d ever take seriously from any of them.

But Yung Jake—who’s already performed at L.A.’s Museum of Contemporary Art, the Sundance Institute’s New Frontiers program, and South by Southwest—isn’t most artists. Or people. Or artist personas of real people. Because Yung Jake the artist, who is the persona of a real person, refuses to have any of these things viewed separately from one another.

That’s just where it starts.

While he’s not the first to work with digital forms or online spaces as a medium for art, Yung Jake is the one making the most interesting new career for himself right now. At the very least, he’s almost definitely the first artist whose press releases describe him as “born on the Internet.”

He seems pretty sincere about all of this, even if his responses to why he only does interviews by text are “it’s just ideal,” “it’s more comfortable,” and “I don’t have to worry about being flexed on.”

Yung Jake was born off the Internet as Jake Patterson, and grew up in Bridgehampton, N.Y., leaving after high school to attend the prestigious CalArts, where he honed his skills in more traditional mediums like drawing and painting. By the time he graduated in 2012, Jake Patterson operated as Yung Jake, a rapper with music videos on YouTube like “Unfollow,” in which he sports a Spider-Man bucket hat and neon pink pants as he pops up across different digital platforms (Facebook pages, Instagram accounts, etc.), appearing in front of rendered backgrounds reminiscent of cheap desktop screensavers, and rapping in a lethargic monotone about unfollowing an ex on social media after a breakup. The hook: “She fucked up, you know I unfollowed her/She showed up, so I had to unfollow her.”

If you’re being generous, you could compare Yung Jake the rapper to Lil B on an off day. But the rapping’s beside the point: “Unfollow” is a genuinely compelling, immersive work featuring music, digital animation, and hyper-focused topicality about how we emote and communicate today. The entire thing lies somewhere between after-school special and sunshine acid fever-dream.

Yung Jake is intent on breaking down the barrier between an online identity and an IRL personality. As more and more people just want to perfect conveying who they are offline (or who they aspire to be) when they’re on the Internet, Yung Jake has flipped this dynamic on its head: It originates with an online presence, as the basis for who he is (or what he does) IRL.

Another well-received Yung Jake work is e.m-bed.de/d, a layered HTML 5 experience that takes over your computer’s desktop, as multiple windows open, synced in time to a rap song about embedding. It’s a surreal, sharp meta-commentary on embedding and contemporary appropriation culture. It’s also packed with sincere ideas, as is his most recent body of work: portraits of celebrities and stars of Internet memes, made exclusively out of emojis.

“The celebrities are iconic to our age and so are emojis,” he texts, when asked about his choices. Maybe he’s being coy. Or ironic. But irony or not, it’s heady stuff. And while success on YouTube and with Tumblr crowds is one thing, winning the art world over, as Jake seems to be doing, is another. So far, he’s shown work at Art Basel. Later this year, he has a solo exhibition with Steven Turner Gallery in L.A. In other words: Yung Jake is alchemizing fame accrued from digital mediums into tangible progress, showing work made in traditional mediums like sculpture. But does that mean Jake Patterson will eventually emerge again from within Yung Jake?

At one point I ask Yung Jake about the demarcation between the name on his birth certificate and the artistic identity he occupies now.

He responds: “I might’ve said I’m hesitant to call myself a character separate from my real self. But I’m a character [as] you are a character.”

But most of us aren’t taking on alternate personalities, I explained.

His response, of course, came quickly: “Neither am I.”