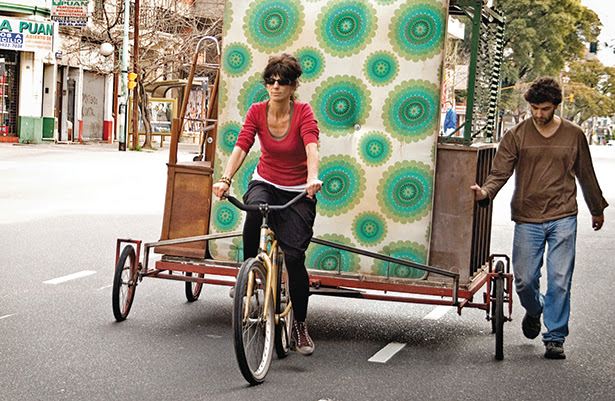 My Buenos Aires at la maison rouge continues a series of exhibitions portraying cities. The series was launched in summer 2011 with Winnipeg, Canada, followed in 2013 by Johannesburg, South Africa. With more than 60 artists working in all media, from installation to painting, sculpture, video and photography, four generations are represented. Established names such as León Ferrari, Guillermo Kuitca or Jorge Macchi will join others to be discovered.

The historian Aby Warburg thought of the artist figure as a “seismograph,” “the inscriber and transmitter of invisible movements that survive, that continue their movement under our earth, that dig, that wait for the moment […] to suddenly manifest themselves.” The intensity with which the city—in the broad sense—infuses our representations (whether gestural, visual, pictorial, musical or verbal) varies in accordance with individual lives and the tensions due to history. The works chosen by curators Paula Aisemberg and Albertine de Galbert to constitute this exhibition, most of them made since the 2000s, do not all take the city of Buenos Aires as their protagonist, but when seen together they do make it ubiquitous.

Like buildings in Buenos Aires, which often have two or three entrances (a very porteño twist on the Haussmannian model), this exhibition articulated in several phases may tell several stories. It could be the story of a day almost like the others, 24 hours wandering the urban stew of asphalt and concrete, from the public space of the street, of theatres, to the intimacy of the home, to the white of early morning, complete with stinging eyes and hangover; a navigating by sight in the “archipelago city” whose fractures upend notions of centre and periphery; or an inward, analytical path, where the stigmata of violence reappear in the mending of split walls, where the repressed returns, like a disarticulated, mumbling ghost whose memory sticks to you the way Peter Pan’s shadow was stitched to his shoes.

For sociologist David Le Breton, the city is not a reality in itself: “Around each inhabitant myriad paths are laid out, linked to their daily experience of the city…Many cities within the same city like an endless nesting of consciousnesses and imaginaries, finally projecting only the real city at the unprecedented confluences of all these viewpoints.”

It in one of these confluences, therefore, that the visitors to La maison rouge are invited to wander through. To fit together the pieces of a puzzle that combine in multiple ways, but will never form a whole, and imagine a Buenos Aires that is partial, subjective and even fictive: that is the project of this exhibition.

To coincide with the exhibition, Fage éditions and La maison rouge are publishing a catalogue, the third volume in the Guides de Voyage collection, with contributions from major Argentinean authors including Maria Gainza (notes on artists), Fernanda Laguna and Francisco Garamona (glossary), and Diana Weschler (essay), and from the French specialist of Buenos Aires Michel Bolasell (notes on the city).

This text is an extract of “A persistent dream” by Albertine de Galbert
(translated by Charles Penwarden).

This exhibition has the support of the City of Buenos Aires.