Growing up in Medellín, Colombia, in the 1980s, artist Camilo Restrepo is all too familiar with the ravages of the drug war. There were the regular car bombs planted by the henchmen of cartel leader Pablo Escobar. There was the dead man in front of his house — the victim of a hit — covered up by a bright yellow blanket, one that had come from Restrepo’s own home. And there was the corpse left in the middle of the street, when Restrepo was just 5 years old.

He remembers that one especially well because it was Halloween. “I was dressed as a superhero,” he recalls. “And here we were looking at this dead body. It was so surreal.” 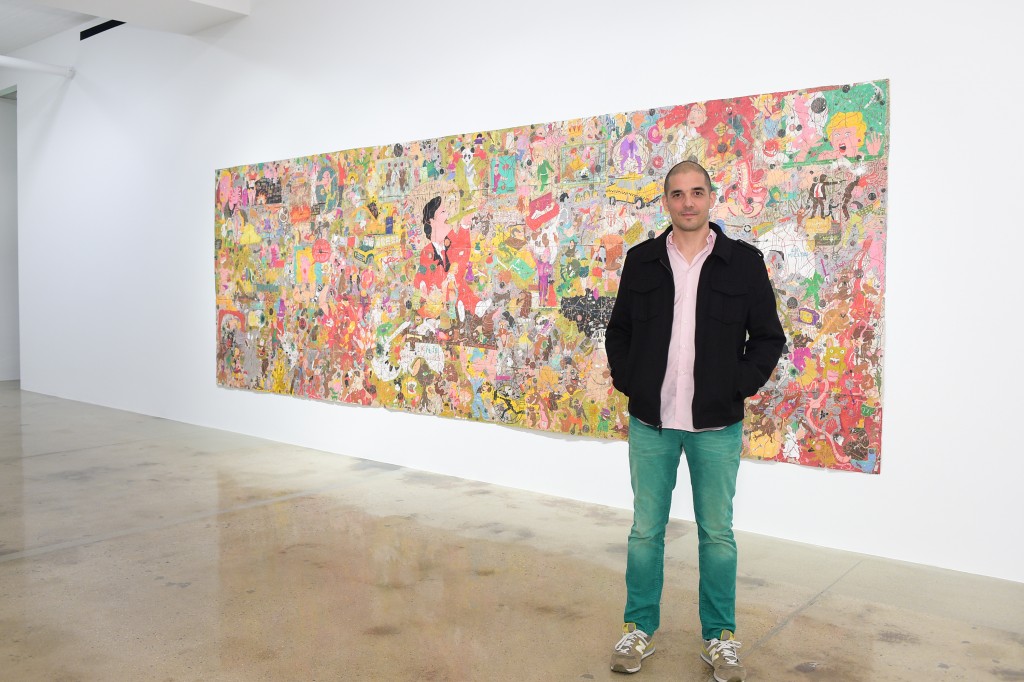 In his work, Restrepo has long explored questions of violence — specifically in ways that connect to the drug trade — but not in ways that you might expect. His sprawling, hyper-detailed drawings, some of which extend to wall-size, are cartoonish phantasmagorias of all kinds of aggression: maniacally grinning animated characters, silhouettes pricked by dagger-shaped forms, loose body parts gripping and grappling pieces of grotesque machinery — all of it woven together by a thick web of veins.
Despite the gross-out aspects, the pieces are absorbing and funny. “They’re drawings that explore aggression on the one side and on the other, the absurd,” he explains, “all in relation to one another.”

The pieces also do the serious work of mapping the ways in which Colombian society has been molded by the drug trade, chronicling the links between narcos and corrupt politicians, but also showing how narco-trafficking has transformed elements of culture, like language. (One of his go-to elements in his pieces are bits of text that he harvests from newspapers.)

Restrepo takes on some of these themes in his latest show, “Tight Rope,” at Steve Turner gallery in Hollywood — toying once again with the intersection of violence and the comically cartoonish. But this time, it isn’t just the morass of the drug trade he’s chronicling in his own work; it’s also the demons in his own head. Restrepo, now 42, was formally diagnosed with an anxiety disorder in his late thirties, and these new works, to some degree, chronicle his mental health struggles, which he likens to “having a boxing ring all the time in your head.”

In fact, the artworks’ central images are various fighters — the Thing, Mike Tyson, the Hulk, Glass Joe (from the Nintendo game “Punch Out!!”) — all surrounded by Restrepo’s familiar web of insanity: politicians, puppets and cartoons all unleashing mayhem. The figures are all bound to one another by strands of tightrope.

“My work is about my experience,” he explains, “whether it’s about the drug war or dealing with other things — like the anxiety in my head.”

Restrepo was born and raised in Medellín, the son of middle-class parents who studied mechanical engineering in college. But a journey all around Latin America turned him onto the idea of becoming an artist.

“I really got into photography,” he says. “After that, I went and did a master’s degree in aesthetics.”

For a number of years, he worked as a teacher and a wedding photographer to make ends meet. Of the latter, he says: “Everyone thinks they are having a really unique wedding. But for me it was like ‘The Truman Show’ — it was the same thing every weekend.”

The job, however, allowed him free time in which to work on his own art, one that initially focused on the paraphernalia related to the drug trade. (He would take pictures of pipes and other objects related to distribution and consumption.) His early work led to some success: Restrepo showed his art in galleries and was nominated for the Premio Luis Caballero, a prestigious Colombian award.

Even so, in his late thirties, he decided he needed to take an artistic leap and enrolled in the MFA program at the California Institute of the Arts — a move that he says “totally changed my practice and my life.” It was while he was at CalArts that his anxiety disorder would be formally diagnosed and treated.

Interestingly, it was drawing — not photography — that he turned to for solace during the stressful first year of the program. “I kept a very personal sketchbook,” he recalls. “When I was done with a page, I’d cut it out and glue to the next. I was just drawing what came into my head — there was that same sense of hyperlinking that you see [in my work] now.”

But it took time for him to bring meaning to the drawings.
“My teacher kept asking me, ‘What’s the concept?'” he adds. “I told her, ‘I don’t know what I’m doing, but I feel good about it.'”

By his third semester at CalArts, Restrepo had given up photography and other types of work to focus exclusively on drawing. It has been his chosen medium ever since.
And yet to label Restrepo’s work “drawing” doesn’t get at the half of it. With simple sheets of paper, he achieves almost three-dimensional effects. He’ll crumple and scrape the sheets until the paper achieves the looseness of fabric. He attacks the surface with ball-point pens. He’ll add a layer of color, then rub it off with saliva. To the surface he adds tape and bits of newspaper, among other elements.

“The paper is not just a surface,” Restrepo explains. “It’s a thing. It can be excavated.”

Turner, who has worked with Restrepo since 2013, says the artist has a truly physical relationship to his material.

“They’re much more sculptural than a drawing,” the gallerist says. “He doesn’t revere the paper. He treats that paper as if it’s wood to carve. And if he doesn’t like something, he’ll use a blade, something that is used to draw blood, and just scrape it away. So the scarring, the damage and the repair are really important.”

A large-scale work he showed at Turner in January, titled “Bowling for Medellín 1,” started off as a rubbing he made from the patch of Medellín sidewalk he was standing on when he found out that the notorious Escobar had been killed.
“That left a print on the paper,” Restrepo says. “It indexed that space onto the paper.”

To this, he added his signature layers of scrapings, cuts, tears, collage and wild drawings (including a depiction of Escobar). It’s bright red-and-yellow color palette makes the piece appear lively and bright from a distance. But the beaten texture of the paper reveals the artist’s aggressive methods.
“Camilo,” says Turner, “takes his works to the brink of destruction and then he revives them.”

And, of course, there’s the content. The cartoon-y nature of his work is quite intentional — capturing that intersection between violence and popular culture. Part of it comes from the childish nicknames that drug traffickers often give themselves — from “Felix El Gato” (Felix the Cat) to “Beto y Enrique” (Bert and Ernie). Some of the inspiration comes from his own life, of being a young boy dressed as a superhero, peering at a dead body.

“It’s not cartoons for the sake of nothing,” he says. “It’s something that exists in the world. It’s not metaphorical. In Colombia, you will read headlines about ‘Barney’ killing ‘El Chavo.'” (The latter a reference to the title character of a popular children’s show from Mexico.)

It is a marriage of visual and spoken language that, with the “Tightrope” series, he has adapted to his own struggles. And one he will continue to experiment with in other ways.

Currently, he is at work on a drawing series titled “El Bloc del Narco.” (“Bloc,” in Spanish, refers to a pad of paper.) In this series, he combs the news for references to the phrase “narco.” For example: If drugs are smuggled within a bag of beans, these are then dubbed “narco beans.” Or a chair stuffed with cocaine might be called a “narco chair.”

“Everything is ‘narco,'” Restrepo says. So, for two years now he’s been collecting these references and drawing a picture to represent each one. “If I see ‘narco horse,’ I draw a ‘narco horse.’ If ‘narco bananas’ are found in Germany, then I show ‘narco bananas.’ I do it one sheet at a time on the tablet of paper.”
Naturally, the exercise borders on the absurd. “What exactly is a ‘narco horse’?” asks Restrepo, chuckling. “I don’t know.”

Ultimately, it’s all part of Restrepo’s way of tackling the ways in which narco-culture has become the dominant culture in some parts of Colombia. “It’s all related to this nonsensical war on drugs,” he says. “It seems the more you fight, the more damage it seems to do to society.”

Not that there isn’t room for positivity. His drawings contain frequent references to Wonder Woman — a stand-in for his girlfriend.

Says the artist: “I don’t know what I’d do without her.”