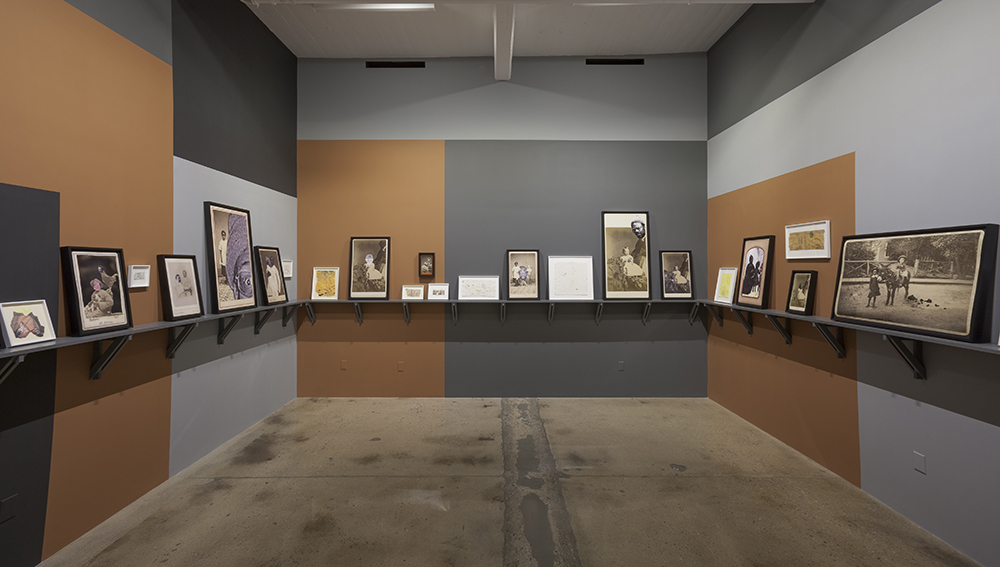 Following a powerful exhibition at the Museum of Contemporary Art this summer, the Chicago artist known as William Pope.L, or just Pope.L, returns to Los Angeles with a show that sprawls across two galleries — Susanne Vielmetter in Culver City and Steve Turner in Hollywood — as well as the spaces in between.
The show at Vielmetter is titled “Forest.” At Turner, it’s “Desert.” And Pope.L has created audio GPS tours for driving between the two. This emphasis on the space between is just one point of entry to an exhibition that includes drawings on Pop-Tarts, stuffed animals entombed in peanut butter and giant erasers. Throughout, Pope.L draws connections between interstitial spaces and our notions of blackness.

“Forest” opens with small, monochromatic text paintings that confound expectations. Nonsensical aphorisms about people of different colors point to the reductive nature of racial stereotypes but also reveal how embedded they are. One shiny black panel reads, “Blue people are wit.” Written in black on black, it is barely legible but simultaneously brings to mind the blues, and a sense of humor that might be the key to survival, even though there are no “blue” people.

Pope.L also draws attention to these mysterious gaps in drawings of the spaces between words and letters, sometimes studded with bits of hair or other detritus, and heavy green curtains that divide the galleries.

Two of the curtains open not into another space, as expected, but onto a blowup of a 19th century photograph: The portrait of an African American woman posed next to a giant sunflower in a head-shaped pot is a startling encounter. It feels so, not only because of its unusual décor, but because the sitter is alone and self-possessed.

Repeated on a smaller scale in “Desert,” the photograph appears unretouched amid a slew of contemporaneous images of white children with their black caretakers that Pope.L has manipulated to include his own visage. In some cases, he has inserted his head as the head of the child, or in one case, more perversely, as donkey droppings. These works are funny and a bit juvenile, but they make their point: In America, blackness has always been that most intimate of shames, simultaneously held close and spurned.

This ambivalence also runs through the centerpiece of “Desert,” a video circling around the story of Joe Gans, an early 20th century African American boxer who, in 1906, famously went 42 rounds to defeat a white fighter in the desert town of Goldfield, Nev. Interspersing photographs and film of the fight and its environs with footage of himself, walking through the desert, Pope.L muses on the spectacle of a black man pummeling a white one, in an era in which such acts outside the ring typically resulted in extrajudicial lynchings.

At the beginning of the video, Pope.L, his head covered with a white towel, is dressed in black and wears only one shoe, inexplicably carrying the other in his hand as he hobbles down a long, paved road. After stops at a saloon and a night at a motel, he ventures out into the desert, this time dressed in light colors and carrying a lighted lantern, even though it is day. Like that black-on-black text, the lantern is redundant; it makes a distinction where none is needed. At the end, as night falls, Pope.L wanders off, dissolving in twilight.