Pope.L returns to Los Angeles, after his MOCA exhibition William Pope.L: Trinket this past summer, with a two-part, two-gallery, map-sprawling, time-spanning show—Desert at Steve Turner Contemporary in Hollywood andForest at Susanne Vielmetter Los Angeles Projects in Culver City—connected by a downloadable GPS driving tour. Samuel Beckett, whose influence appeared in Trinket, returns again in the GPS guide’s insistently jolted repetitive language, “this thing this thing this thing you are are are listening to is your conscience.” 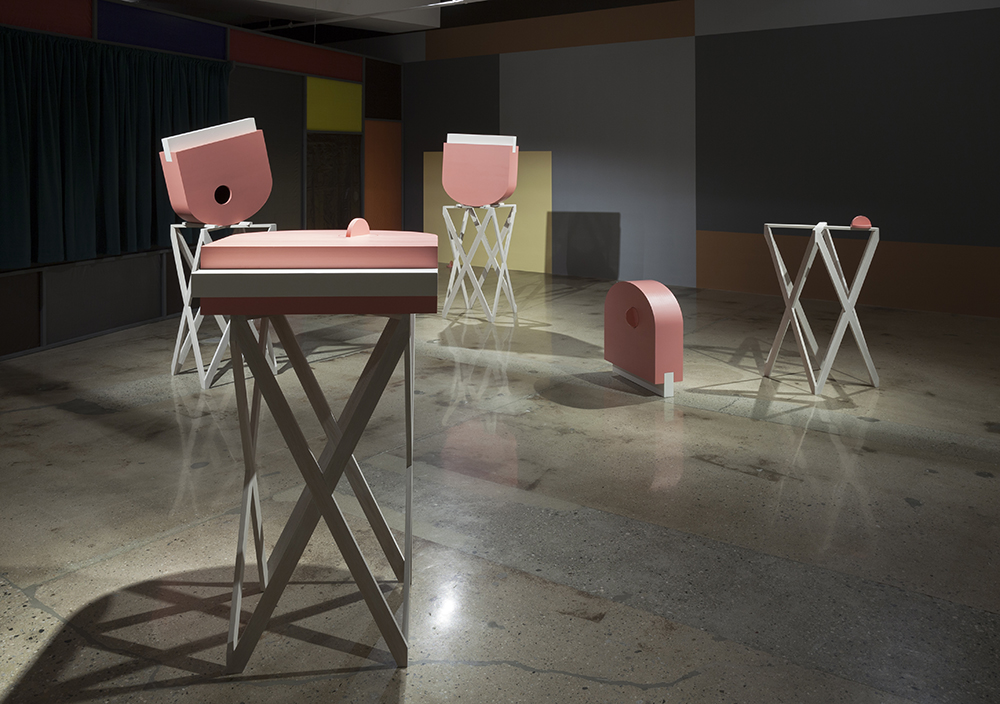 History, trapped, bubbles up in each site and in the space and time between them. Do you know how forests became deserts? The driving tour answers, but only after a voice warns that while there aren’t any tricks in the physical artwork, the audio portion of this exhibition might have some. Continuing on S. Cochran Ave, the guide finally divulges, “Forest is just oil in another lifetime … a forest will become a desert and.” The audio stops mid-clause.

Pope.L twists gaps and opens up fissures. Sentences stop mid-meaning. Logographic texts, such as “& – ,, +,” line the walls of Desert at Steve Turner as isolated interpolators of written language. Words are pushed in and out of near-identity—destiny becomes “dustiny” becomes destiny—simultaneously signaling a boundary and a connection. There is total removal: an erasure haunted by another erasure, a package never opened. Desert is populated by Pope.L’s pristine sculptures of eraser heads, pink and propped up on stands or tilted on the floor, punctured with holes. Nigger Eraser (1998–2002), a deodorant container, modified with marker, chocolate, and cellophane tape, is the oldest piece of Pope.L’s work shown in Desert.

Pope.L photo-bombs history, interjecting his likeness into 19th-century photographs of black caretakers inServants, a series of manipulated photos. Pope.L’s likeness peers out of a window, merges with a donkey’s face, replaces a white child’s face, and multiplies as donkey droppings among other transformative infiltrations. 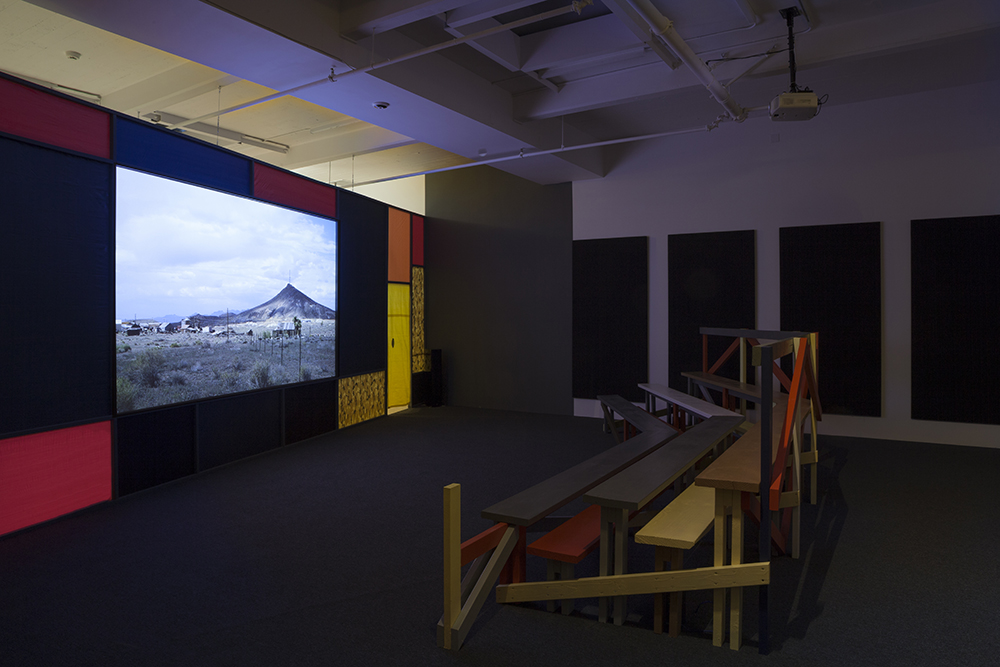 Obi Sunt (2015) is a 35-minute film that weaves images from a rare photo album of the 1906 Gans–Nelson fight, recent footage from Goldfield, Nevada, and poetic text. Screen-gazing in an air-conditioned gallery, the viewer sees Pope.L walking through the desert alongside a road. He is walking with a single-socked foot dragging along the blacktop, one shoe on his left foot, one shoe in hand, a backpack over his shoulder, and a boxer’s towel on his temple, shrouding his face from the sun. RVs and automobiles careen around the artist and his stilted gait. In the dry heat of Goldfield, Nevada on September 3, 1906, Joe Gans fights 42 rounds against Battling Nelson, and in that desert, in these United States, there is an unseen ceiling—a ceiling that was felt by Joe Gans that came down and crushed him in a cycle of opportunities with regressive gains. Our Icarus never gets to fly up off the dusty ground, but he remains the greatest lightweight boxer of all time. The film is framed by painted bleachers, and lies behind a velvet-curtained stage-like apparatus, making viewers a spectator in this blood sport. The title Obi Sunt is a play on ubi-sunt (where are they?)—a Latin phrase meaning “those who came before us.” “Forest is just oil in another lifetime.”

Peanut-butter-covered stuffed animals are mounted on wood like sticky trophies in Forest at Susanne Vielmetter. They hang above lush green curtains that divide space and act as passageways. One curtain opens, not to another room, but to a large, seated portrait of a 19th-century African American woman. The portrait is a mash-up of cultural signifiers: A ceramic pot shaped as a head holds a giant sunflower sitting on an intricate rug. The sitter leans her head on her hands, holding a chain that leads to a horseshoe on her lap. 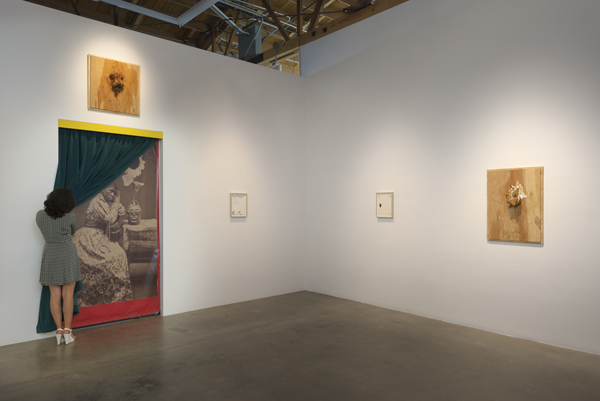 Throughout all of these works, Pope.L gathers the everyday material signs of race to turn them on their head, conjuring a subversion of an intangible ideology. In his GPS guide, Pope.L’s narrator thinks, from afar, that the trees of the forest are people, only to bicycle closer and find that they are, in fact, trees. This may be one of those aforementioned tricks: a theatrical misdirection. The trees are people, and the inscrutable forest is the racist ideological structure in between and all around us.