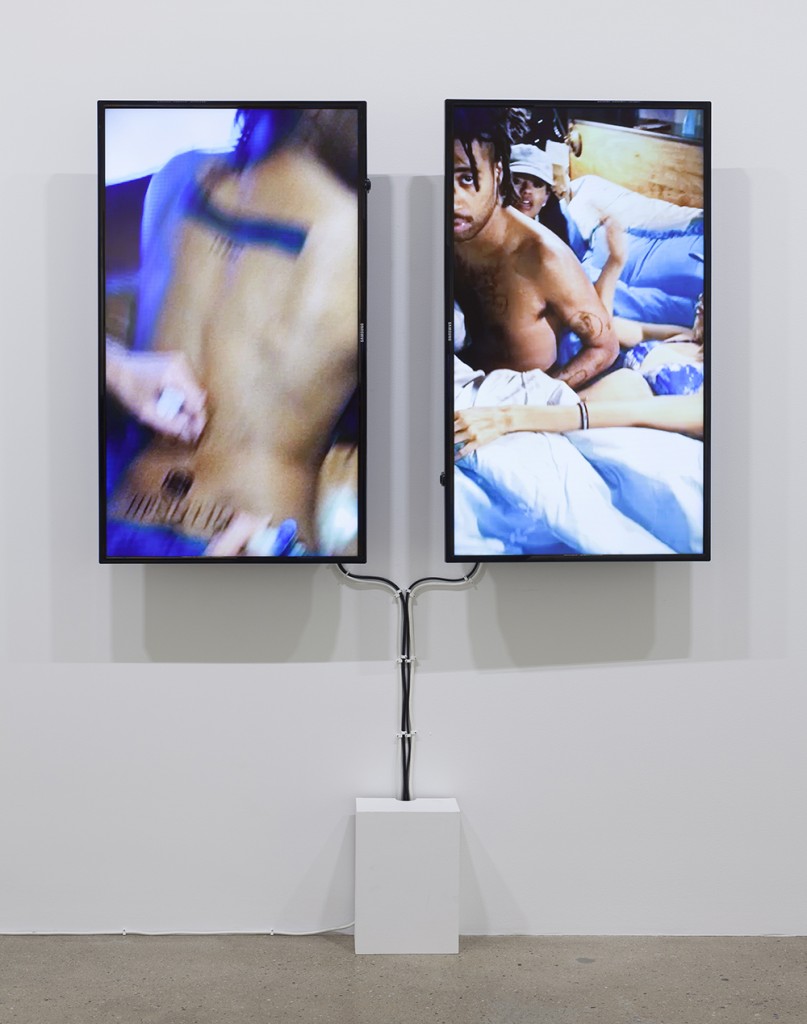 The artists involved in The Real World are no strangers to the internet. Running at LA’s Steve Turner Contemporary from December 12 to 30, the work in the exhibition by Ann Hirsch, Jayson Musson, Casey Jane Ellison, Yung Jake, Petra Cortright and Ryder Ripps speaks to the space between art and the online, and how that space takes its form, be it in Coogi sweaters or ethereal data.

Four partitioned video pieces are located in the center of the gallery, installed on a free-standing kiosk. The main gallery space is filled with the sound coming from Yung Jake’s music video piece ‘Both’ (2015) which sits at the exhibition’s natural middle. The video plays panoramically between two flat screen television monitors, oriented vertically on the wall. It’s a reference to it’s initial release in September via Yung Jake’s personal Snapchat, available in two parts and requiring two smartphones to be viewed correctly. The video follows Yung Jake and two woman companions through a variety of lively party scenes, cutting between places and people, non-sequentially playing out like a contemporary advertisement for Hypnotique brand liqueur. 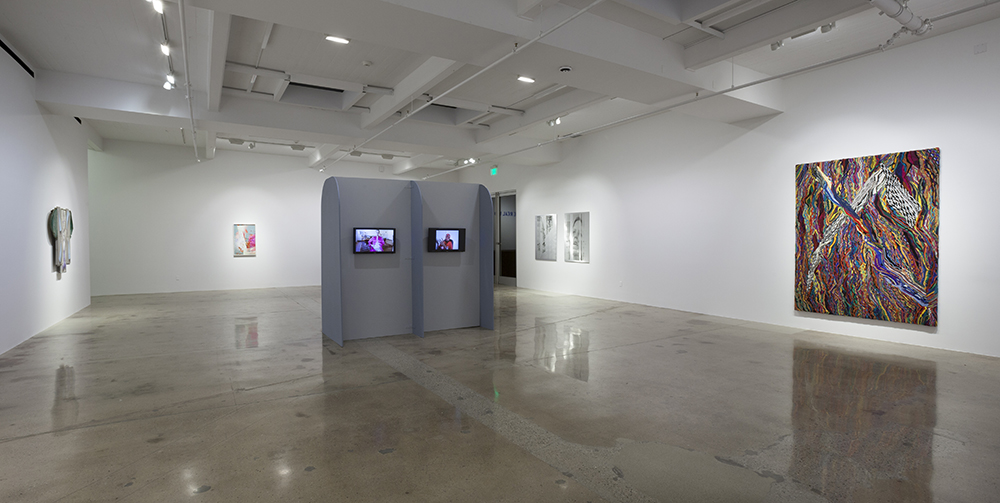 The kiosk is bookended by Hirsch’s paintings ‘Ann Mirsch’ (2015) and ‘50 Shades Wedding’ (2015) on one wall and Musson’s mercerized cotton canvas ‘Black Bisector’ (2015) on the other. Mounted directly across from Yung Jake’s ‘Both’ is the kiosk that houses Musson and Hirsch’s respective webcam pieces, ‘How To Be A Successful Artist’ (2010) and ‘Physical Contractions’ (2015), creating a unique triangular dialogue of success. Hirsch’s video piece and paintings all reference marriage and procreation. Musson performs as ‘Hennessy Youngman’, an invented vlog persona instructing his viewer on how to succeed in art (being both white and ambiguous are key). ‘Black Bisector’ comprises the shreds of several Coogi sweaters to create one huge composition as iconic as those worn by rapper Biggie Smalls himself, while Yung Jake’s opulent music video reminds us that he’ll take both, specifically when he can’t decide between “two bad bitches”. Also included is Yung Jake’s ‘Hypnotiq and Cîroc Bottles’ (2015) wall-hung sculpture, made from found metals and digitally manipulated liquor bottle vinyl wrap transfers. It’s a mash-up of digital and physical spaces referencing the drinks’ history of promotion and advertising in hip-hop music and culture.

Installed directly opposite is Ripps’ ‘Unidentified Person 2 and 3, Sotheby’s Contemporary Curated Auction Party’ (2015) – a contrasting diptych of two portraits pulled from grainy surveillance footage and then UV-printed immaculately onto brushed aluminum. Ripps’ ‘dump.fm’ (2010), a seemingly endless voyeuristic view into an online chatroom, is simultaneously entertaining and frustrating. The viewer has no control over pace, content, and can in no way interact. This frustration is complemented by Cortright’s video ‘banksi unbrush ponitaeyel’ (2015), which plays beside Ripps’ piece, showing the artist trapped in a corner by an endless barrage of colorful digital interference. It’s a reference to Cortright’s early video works posted originally to YouTube and serving as defining works of early online video art where the artist digitally manipulates her own face via webcam. 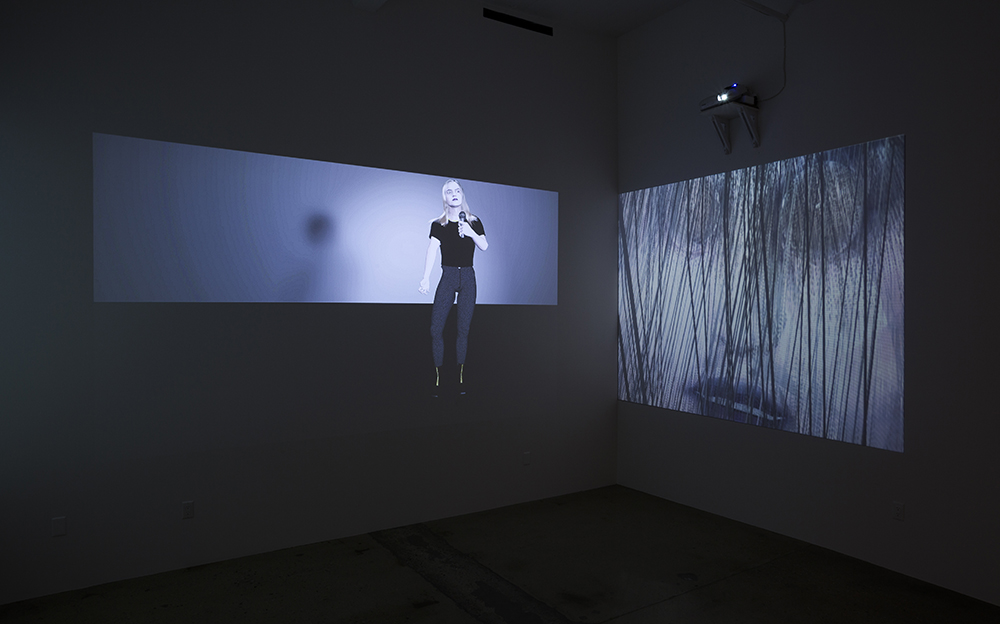 Casey Jane Ellison’s ‘It’s So Important to Seem Wonderful Part II’ (2014) utilizes a separate room to house a three-channel projection with accompanying sculptures and a smaller video piece at the room’s entrance. The moving images most prominently feature a crudely animated 3D self-portrait of the artist that glitches and meanders alongside the audio, obviously out of sync. It amounts to a sense of discomfort and fascination as the artist carries her monologues at a stand-up comedy pace.

Site-specific art is historically the anti-gallery practice. It is art created to exist in specifically one place. At its most refined form, it is a rejection of the commodification of art. This theme plays out conceptually in The Real World as the viewer is confronted with works that exist both in ethereal sites online, and within the commercial gallery itself. The exhibition title could be a tongue-in-cheek reference to the ‘real’ world as we know it becoming ever-more digital, or an obvious nod to the 3D pieces included in the show. It feels more as if it comes full circle, back to the digital origins of these six millennial artists and their website-specific works. **