Some artwork doesn’t belong to the art world. Olafur Eliasson’s “Waterfalls” in the East River, for instance, belonged to the tourists. Ryan Trecartin’s “A Family Finds Entertainment” belongs to the Internet. And some might say “Hydration,” an exhibition by Yung Jake (born Jake Patterson) at Steve Turner in Los Angeles, belongs to rap, branding, and social media. 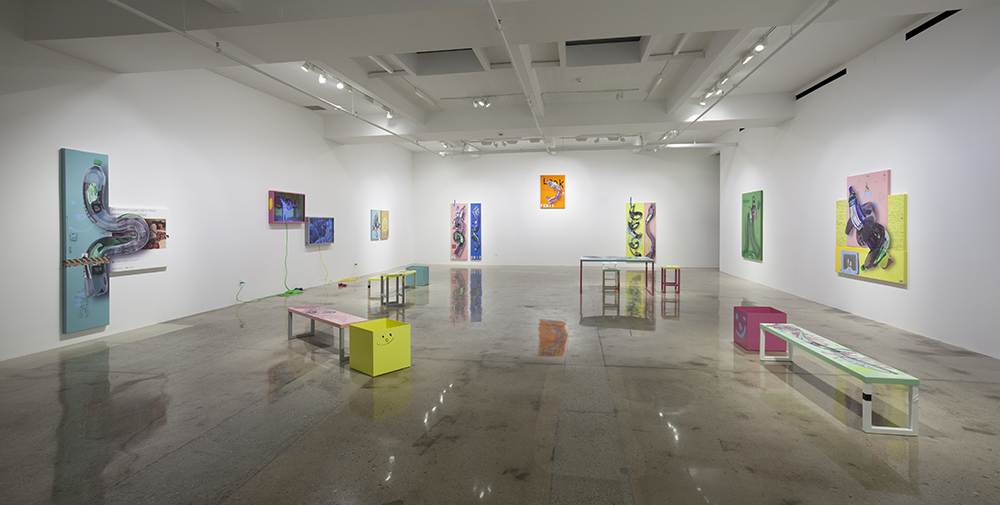 Yung Jake’s work does resemble net art, a catchall term for art that uses the internet as its medium. His oeuvre spans interviews conducted via text message, viral portraits of notable people made from emojis, and music videos that reference datamoshing and the programming language HTML5. But more than that, his work foregrounds nostalgia for the earlier days of the internet and mass image dissemination, a common theme among net artists. His newest project, “Hydration,” consists of steel panels covered in glossy paint and corresponding furniture (benches, a table, ice buckets) decorated with sketches of characters from 1990s cartoons like Hey Arnold! and video games like Sonic the Hedgehog and Kirby. It’s safe to assume that Yung Jake, who was born in 1990, grew up surrounded by these icons of gaming and Saturday morning cartoons.

There is also a healthy dose of logo mania. In the gallery, a scavenger hunt turns up labels from Volvic and Fiji—big, malleable water bottles twist comically, like balloon animals, across most works in the show—along with logos from Twitter, Cîroc, Patron, Xanax, Budweiser, Hennessey, Skittles, Netflix, Beats by Dre, Crayola, and more. But not all of these brand names were found on Yung Jake’s paintings and sculptures; some come from pieces of litter left after the rowdy opening night reception, part of the artist’s work. The detritus scattered across the floor, benches, and tables ranges from cigarette butts, an unopened condom, several empty medicinal marijuana containers, chapstick, and 63 cents in loose change. This is where Yung Jake’s work rejects any ability to wholesale lump it in with net art.

On opening night, 1,000 people showed up, enticed by performances by DJs Softest Hard, Sonny Digital, and hyped Atlanta rapper Lil Yachty. So many that, the day after, there was evidence that the heat generated by the crowd produced drips from gallery’s the ceiling rafters—an unintended allusion to the show’s title. Despite the presence of 15 guards, two fights reportedly broke out. Words were scratched into the metal artworks. And at the end of the night, Yung Jake poured Cîroc vodka all over his wall pieces. Those who weren’t in attendance could catch the night unfold on the artist’s Snapchat feed. In the ephemeral videos, crowds rapturously bounced around the gallery.

Yung Jake also incorporates rap into his own performative language. His videos, where he drawls rhymes in a sing-songy autotuned monotone, are well produced and clever. On one of the gallery’s walls, two TV screens, on which he’s scrawled “Samsung” in Sharpie, display his latest video, IDR (2016) short for “I Don’t Remember.” Whether Yung Jake is remembered in time remains to be seen, but he definitely leaves an impression on the community—one that transcends the traditional art-viewing experience—that is hard to ignore. 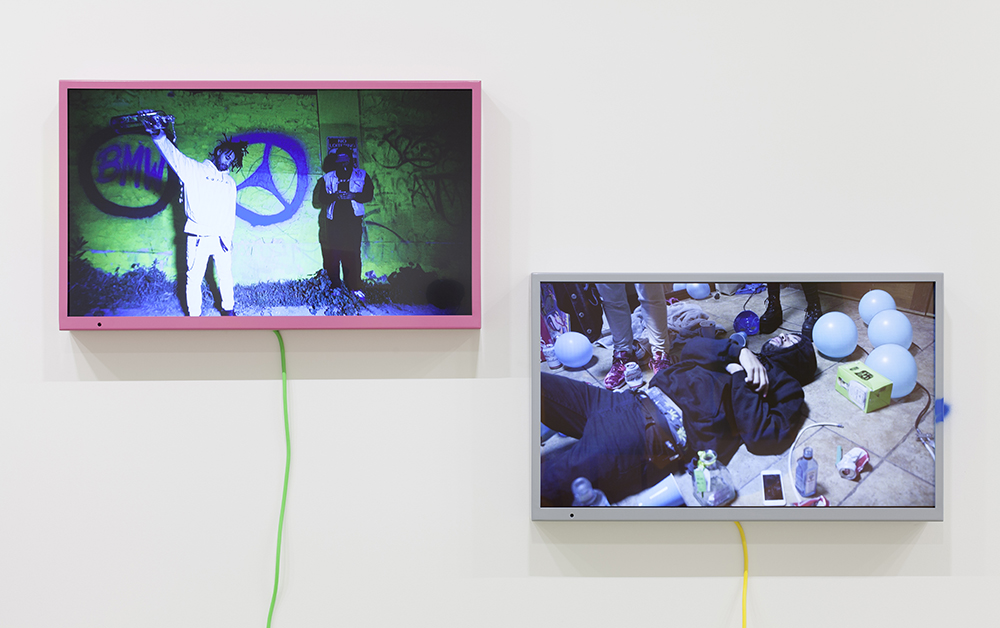 This Saturday at 6:30 pm, the artist screens his newest video, “It’s Wet,” at the gallery. The piece is made entirely from footage taken at the exhibition’s opening happening. Judging from the entertaining pandemonium at that event, tomorrow’s reception is one you might not want to miss—whether via social media or in real time.
Click here for more info.