Artists turn L.A. gallery into a museum of nuclear dystopia 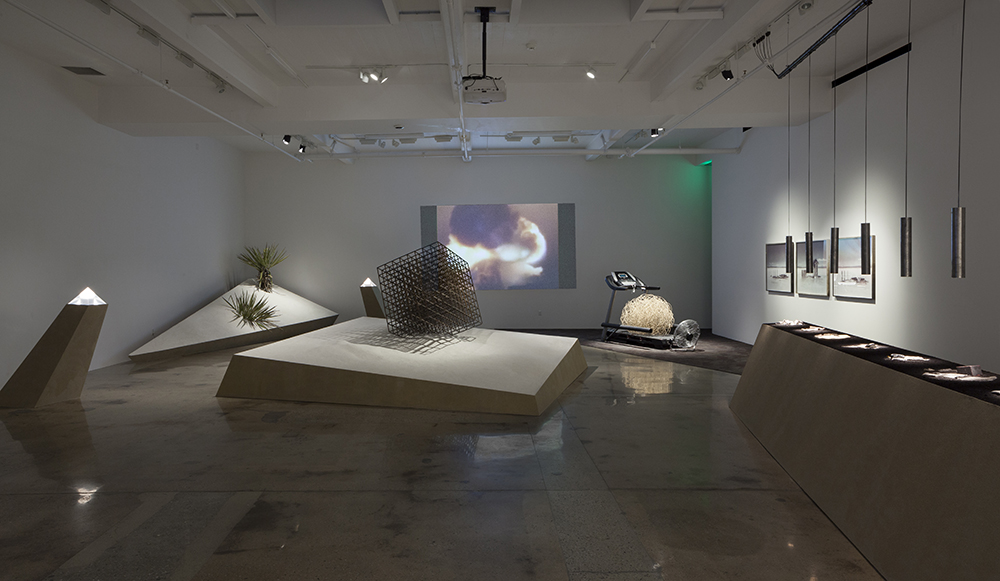 The exhibition “Desert Now” is the result of a 12-day, Adderall- and LSD-fueled trip through the American Southwest by three German artists — Julius Von Bismarck, Julian Charriere and Felix Kiessling — who have transformed the galleries at Steve Turner into an idiosyncratic, dystopian museum focusing on the desert as a nuclear test site. It is a provocative ramble.

Darkened and broken up into an arrangement of angular, sand-filled pedestals, the main gallery is laid out like a contemporary natural history display. Instead of cheery, informative dioramas, however, the presentations are sculptural, with nary a didactic panel in sight.

They include yucca plants, vibrating as if from underground tremors, and a rusted metal cube, listing in the sand. Its rigid, grid structure has been subtly disrupted at the center, the aftermath I’m told, of an explosion. There is also a tab of LSD and an Adderall pill, each enshrined in a clear plastic pyramid, and a pedestal filled with black sand upon which rest various everyday items — vessels and tools, it seems — that have been melted or fragmented beyond easy recognition. There is even a “gift shop” in the entryway, complete with a rack of postcards and a stock of “snow” globes filled with sooty black grit instead of fake snow.

Clearly this is not the romantic vision of the wide-open West familiar from Hollywood movies or utopian rituals such as Burning Man or even the site-specific art projects of James Turrell or High Desert Test Sites. This point is underscored by two pendant pieces in the main room: a video projection of failed rocket launches and a photomural of theYosemite rock face El Capitan.

The video, which is projected large on the back wall, fills the space with images of near-apocalyptic violence: blasts of fire and smoke and spectacular explosions. Coming one after the other, they comprise a relentless portrait of failure. The flash and scale of the launches is striking, but so is the extreme waste: the surfeit of energy expended, the blasted landscape left behind. This is the wilderness as empty stage, awaiting the fury of our fantasies.

Across the room is the idyllic opposite, a soaring, black-and-white photomural of El Capitan. In front of it hangs a somewhat cheesy, full-length portrait of John Muir holding an iPhone. He appears to be taking a selfie, and the set-up mimics museum displays that encourage that activity. Here (though technically not the “desert”) nature is something pristine, to be preserved and revered — but only as an image. The artists remind us how this impressive spot has been flattened, not by explosives, but by sheer repetition; it is just another photo op as well as the wallpaper on our Apple computers.

The key to these disparate displays appears in the second room, which contains only a video from the Bradbury Science Museum in Los Alamos, N.M. It documents the Manhattan Project and the nuclear tests that took place there in a chillingly matter-of-fact way. It provides the “aha” moment for the trembling plants, blasted cubes and melted implements in the first room: the desert as contaminated test bed.

Yet there is life. The most hopeful piece in the show at first seems like the definition of futility: a tumbleweed running on a treadmill. The desiccated bush turns relentlessly, caught between the motion of the treadmill and the “wind” from a fan. As it tumbles on its Sisyphean journey, pieces break off; it slowly disintegrates. But, as the gallerist noted, rambling is how the tumbleweed spreads its seed.