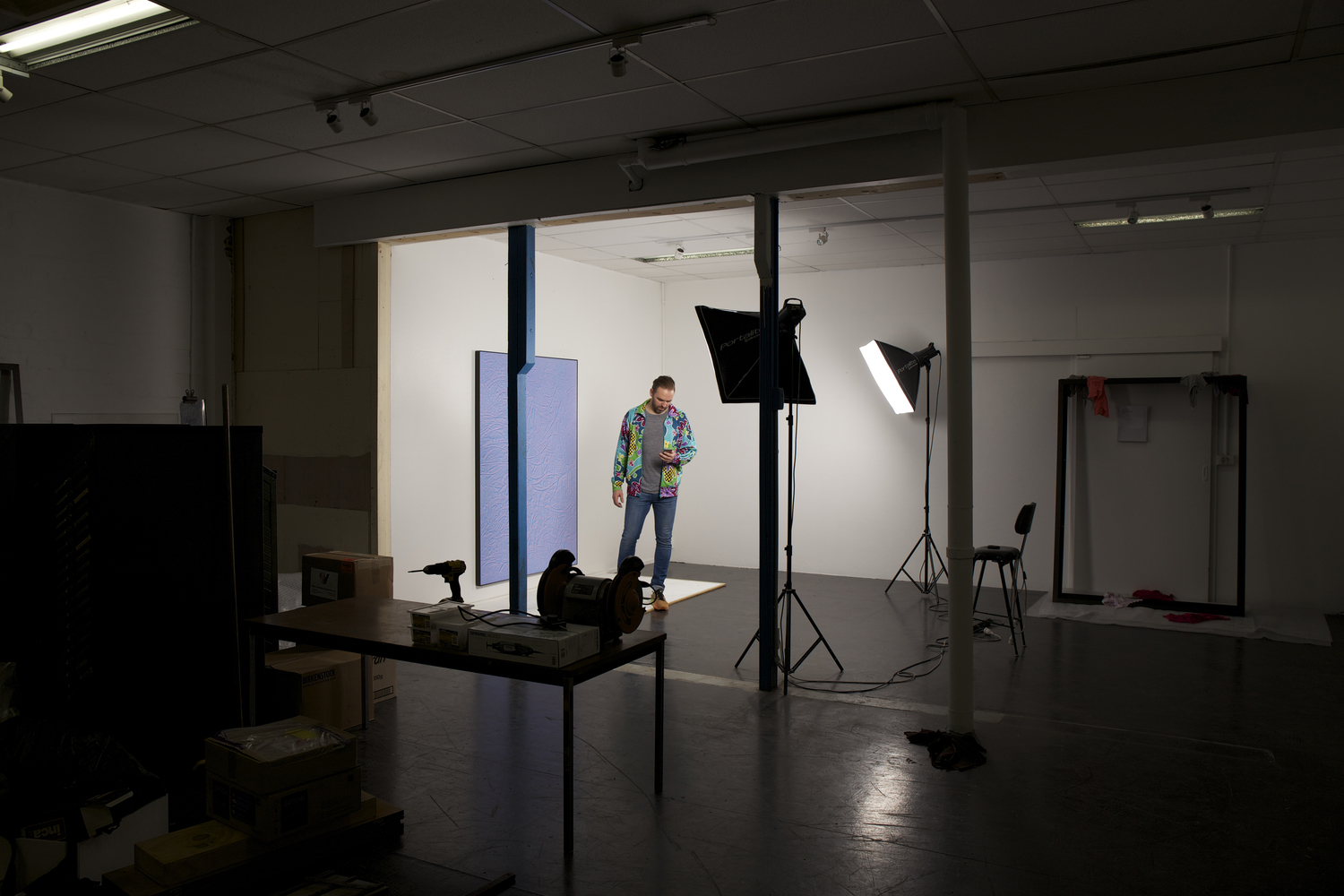 Michael Staniak is a Melbourne-based artist who combines traditional art-making techniques with new digital processes to create paintings that appear to be printed and flat but are actually made by hand and have depth and texture. In mixing materials and methods, Staniak explores the different ways in which digital information is changing the physicality of painting and sculpture.

We asked Michael Staniak some questions during this studio visit and he also got four bonus questions from Jeffrey Uslip, Deputy Director and Chief Curator of the Contemporary Art Museum, St. Louis. In 2015, Mr. Uslip organized the first museum solo exhibition for Staniak, and he is one of the authors in the soon to be released monograph on the artist.
MTV: I recall reading somewhere that you were a professional tennis player. I have not known too many artists who competed in sports at such a high level. Does that history have any impact on your artistic practice?

MS: There is a certain amount of discipline required to being a professional tennis player. Endless hours of regular practice were needed for me to perfect small nuances in my game. There is a similar relationship between that training and the hours I put into my studio practice—experimenting with and perfecting my creations. A high level of discipline and drive is involved in getting to the studio on a daily basis, especially without anyone telling you that you have to be there. So in many ways, the good habits I learned through playing tennis have transferred to my studio routine.

MTV: How does living in Melbourne, Australia affect your burgeoning international art practice?

MS: There are both positives and negatives. From this distance, getting to the many shows that I have overseas can be very difficult with my schedule, especially as I make most my work on site by hand in the studio. I am also not as exposed to some of my favorite international art in person. However, I have learned to read work very well via the Internet. Also, being away from a lot of the buzz and hype that goes on in some of the bigger cities does allow me to focus on what I am doing in the studio. Basically, there are less distractions here.

MTV: Have you ever considered living elsewhere? Maybe in the US or in Europe?

MS: Of course. I used to live in the US and I would definitely consider living and working between Melbourne and Los Angeles. I think the weather in LA is a very attractive prospect. I have some family in Europe, so there is a connection with that side of the world as well.

MTV: You are often associated with artists who are connected to the so-called “Post-Internet movement.” What is this and how are you connected with them?

MS: “Post-Internet” is a tricky term because I think it has been so absorbed by popular culture of late that is has lost some significance. People now using the Internet do not belong to a nerdy, coder community. It is an essential part of every person’s daily life. The term “Post-Internet” describes this era, where the Internet is an invisible force completely intertwined with typical, everyday tasks. I am conscious of the effects this technology has on my work and art in general, which is why my art is categorized as “Post-Internet.” By this definition, almost all art made now could be considered Post-Internet, as every artist at a minimum uses the Internet for research or display. But I would say that only the artists making work conscious of the Internet’s effects on their work and the broader canon of art can really be categorized as working within the realm of “Post-Internet.”
MTV: I note that you also create sculpture. How does sculpture relate to the rest of your studio practice?

MS: I am just as interested in images as I am in objects. Even my paintings could be considered objects as they do have a very sculptural element. I think I am quite tactile in the studio, so the sculptures that I make come about from my desire to work spatially.

MTV: Your paintings are very beguiling. Are they flat and photo based? Or are they actually painted by hand? I have seen some online that look 3D and yet I have seen others in person that appear flat.

MS: The paintings can be read two ways: online and offline. Both result in different sensations. This can be termed a “duality.” In person, the paintings appear more flat than textured but on the screen they seem convincingly sculptural. The works are all handmade but do appear to be produced by digital means, and as such can be confused as digital prints. The techniques and materials I utilize contribute to this effect.

MTV: What about the TGA series? Are the lines drawn or painted by you?  What do they represent?

MS: The gestures that appear in the TGA paintings are made with my fingers. I inscribe marks in the casting compound using similar movements to those we use to navigate touch-screen devices. The resulting marks appear to be a code or script of sorts; resembling that of an ancient forgotten language or a new code that drives our current technology.

MTV: You also have a very specific palette. What informs your color choices?

MS: Most of my paintings utilize colors that I feel are most evocative of a screen-based aesthetic. The TGA paintings more specifically resemble Normal Mapping – a technique whereby a 3D model constructed on the computer can be wrapped by an image that has been “mapped” with elevation and texture. Thus this 3D wrap adds more detail to an object that would be otherwise be quite rudimentary, whilst also using much less processing power.

MTV: I note that you have produced works in a dozen or more different series over the last few years. I am imagining that some series are more popular than others. Is there a temptation to stick with a series that is better received over one that is less enthusiastically received?

MS: It is always tempting to produce something that has been successful in the past. However, success comes in many different forms – with collectors, curators, the general public or myself. But as you observe, in my quite diverse stream of painting and sculpture, I am constantly experimenting in the studio and evolving my practice. I aim to always be excited by what I make and not dictated by outside factors.

MTV: Which of your upcoming projects most excites you?

MS: My main focus will be my solo show at Steve Turner Los Angeles in October. Of course that excites me very much. However, I am also particularly excited about a collaborative special project I am doing with Mexican artist Pablo Rasgado at Art International Istanbul in September with Steve Turner LA. There, I will be revealing a few completely new works that very much traverse the line between painting and sculpture.

JU: How have you used technology to further the agency and function of the brushstroke?

MS: In actual fact, I do not ever use a brush in any of my paintings. However, my recent TGA paintings utilize my finger as a kind of brush. There is something very primal about using your fingers to paint. It is the first way we play with paint as a child and also the first ways we made marks as humans in the dirt or on cave walls. That tactile element of my work closely simulates the way we use our fingers to make gestures on a touch-screen device. However, the visceral experience of manipulating a tangible, viscous substance as opposed to electronic code is poles apart. Still, the touch-screen could now be considered a painting tool, much like a brush, and so I feel that although I never use a brush to paint, my connection to the history of painting through the variety tools we use is very strong.

JU: Do you see your works within the larger canon of Abstract Expressionism?

MS: The gestural qualities of the TGA works definitely have a stronger connection to subconscious “expression” than any of my other paintings and most of my works do have a particular focus on materials and process. However, there is an underlying conceptual element to my work that separates what I do from the “purity” of painting as sought by Abstract Expressionists.

JU: How has digital technology affected the “the autonomous mark of the artist?”

MS: Whether an artist is aware or not, digital technology will forever have an impact on the choices we make for our work –in production, post-production or documentation. I do not think that any artist can be completely isolated from digital devices and therefor act independently from them. Pretty much every work will end up on a screen, so the final outcome of how something looks in person will usually also take into account how it will look on a digital device.

JU: How does your practice complicate the cyclical and circuitous notions of Data and History?

MS: In some of my most recent work I am researching the impact that capturing all physical works in a digital format will have on our interpretation of our current history in the future. It is difficult to know how well preserved digital information will remain, as it is susceptible to corruption, chemical degradation and even hackers. However, as recent events in the Middle East have proven, destruction of physical works can also be catastrophic and final. We are at an interesting point in time where digital information can be reproduced physically and even improved upon but with a loss of authenticity. My newest works later this year will explore the disruptions that can occur when reproducing digital information from permanent physical content.