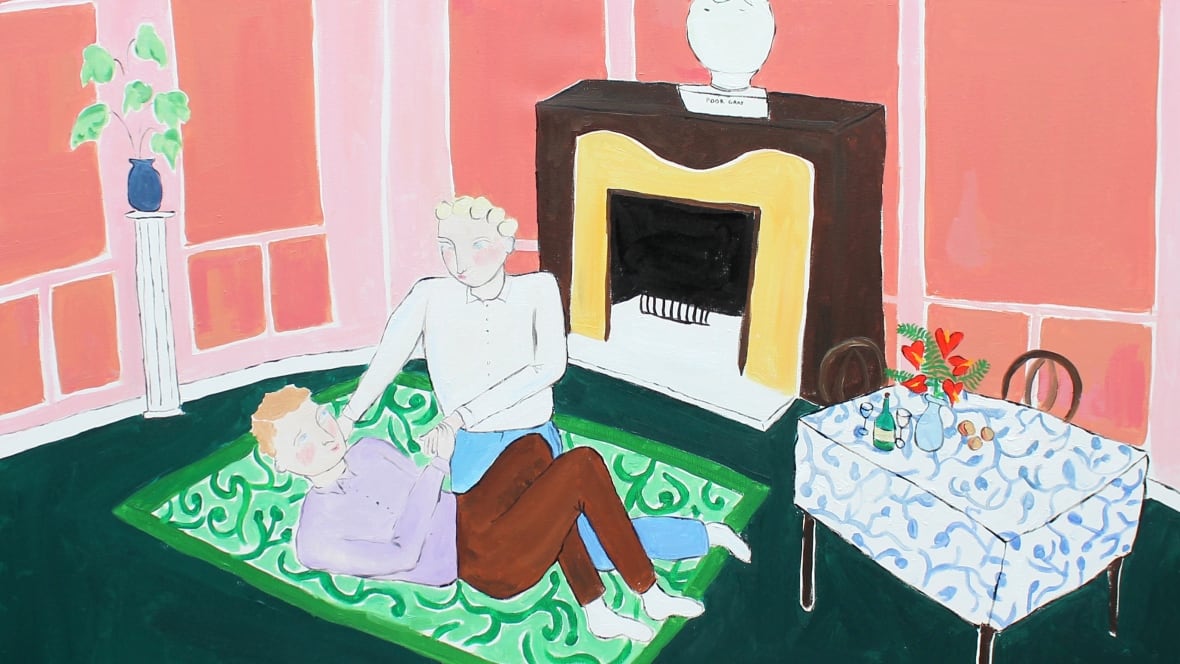 If you’re bored of how women are represented in fashion, try being the person behind the camera. A few years ago, Montreal’s Claire Milbrath was “doing the fashion photography thing,” as she puts it, and every assignment was the same old clichéd thing. She’d shoot a model — a female model — who’d be alone and oversexed and lounging around like some unusually alluring sloth.

“I’m so tired of how women are being represented — it’s usually in this one way,” says Milbrath, though the sloth analogy is ours. “It was just so much of the same.”

“I feel like I was frustrated, and Poor Gray is kind of a response to that.” 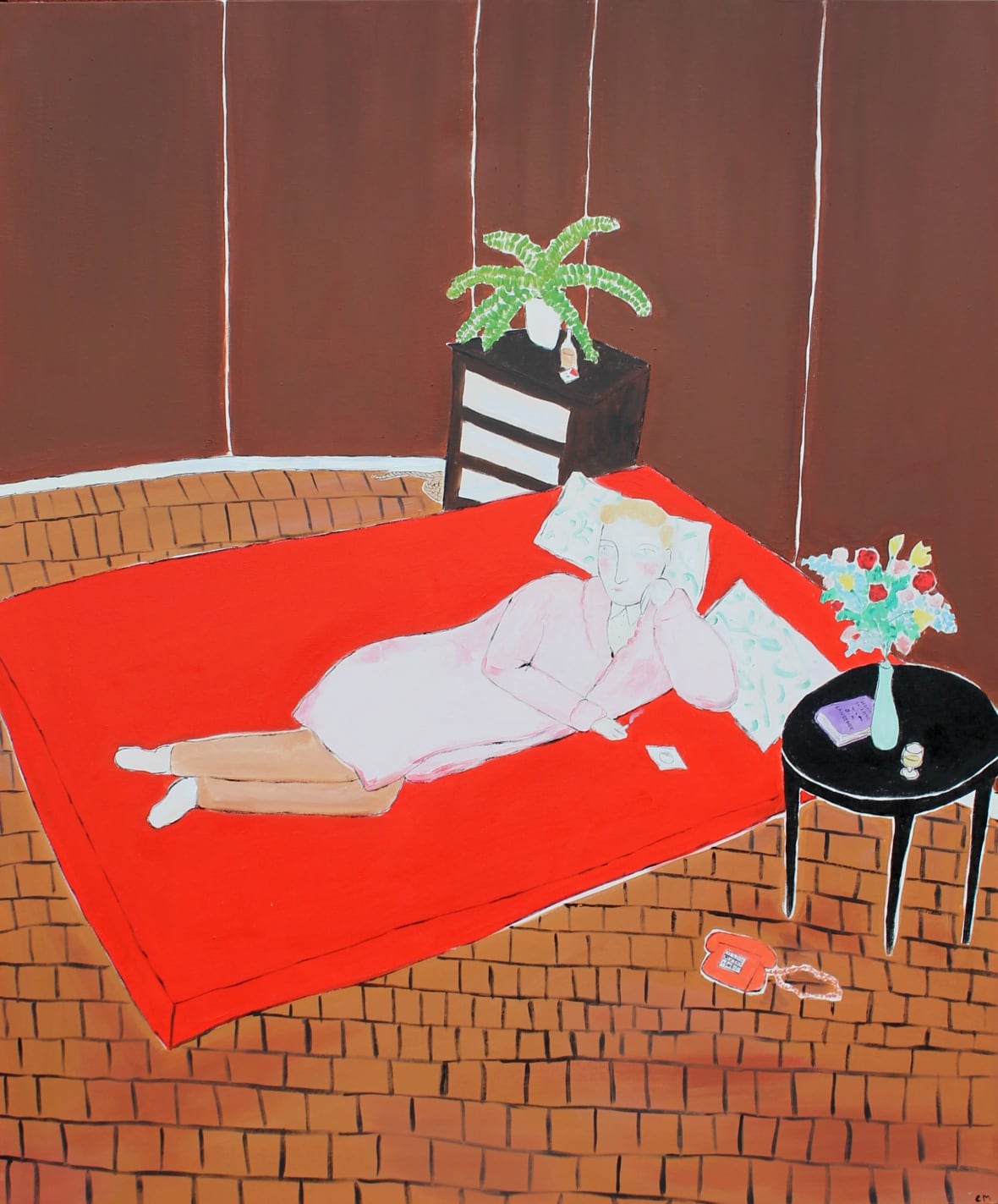 Poor Gray, by the way, is a fictional character.

He appears in Milbrath’s comics (which began running in Vice in 2014) and her paintings. His likeness regularly appears in Milbrath’s art magazine, The Editorial, which she founded while wrapping her history degree at Concordia in 2011. He is also the star of her first solo exhibition of paintings, Domestic Scenes, which runs at the Steve Turner gallery in Los Angeles to April 29, as well as a few works currently included in a group show at Lisa Kehler Art + Projects in Winnipeg.

He’s her lazy male avatar to some degree, and Milbrath’s been doodling his placid face since high school. (“I can’t draw very many things, but I can draw a man — or what looks like a man — laying down,” she laughs.) More recently, though, Gray’s world has evolved. Through him, Milbrath takes the piss out of all the sexist imagery we’re used to seeing in fashion — and throughout art history, too. Why is it so unexpected, funny even, to paint a man posing like he’s a Victoria Secret model or the Venus of Urbino? She’s exploring representations of gender, of wealth, of power — all while having a laugh.

I wanted people to laugh and ask themselves, ‘Why is this funny?’– Claire Milbrath, artist

Pale and round like a human perogy, with a rosebud mouth and a cloud of ginger curls, Gray figures in most — if not all — of Milbrath’s artwork. “He’s really idle and doesn’t have a purpose,” she says. “I really don’t know how old he is. Maybe my age?” (she’s 27), and his life of leisure often takes him poolside or to garden parties — though she usually paints him hanging at home, where he might be found watching TV or reading a book about bondage for dummies. 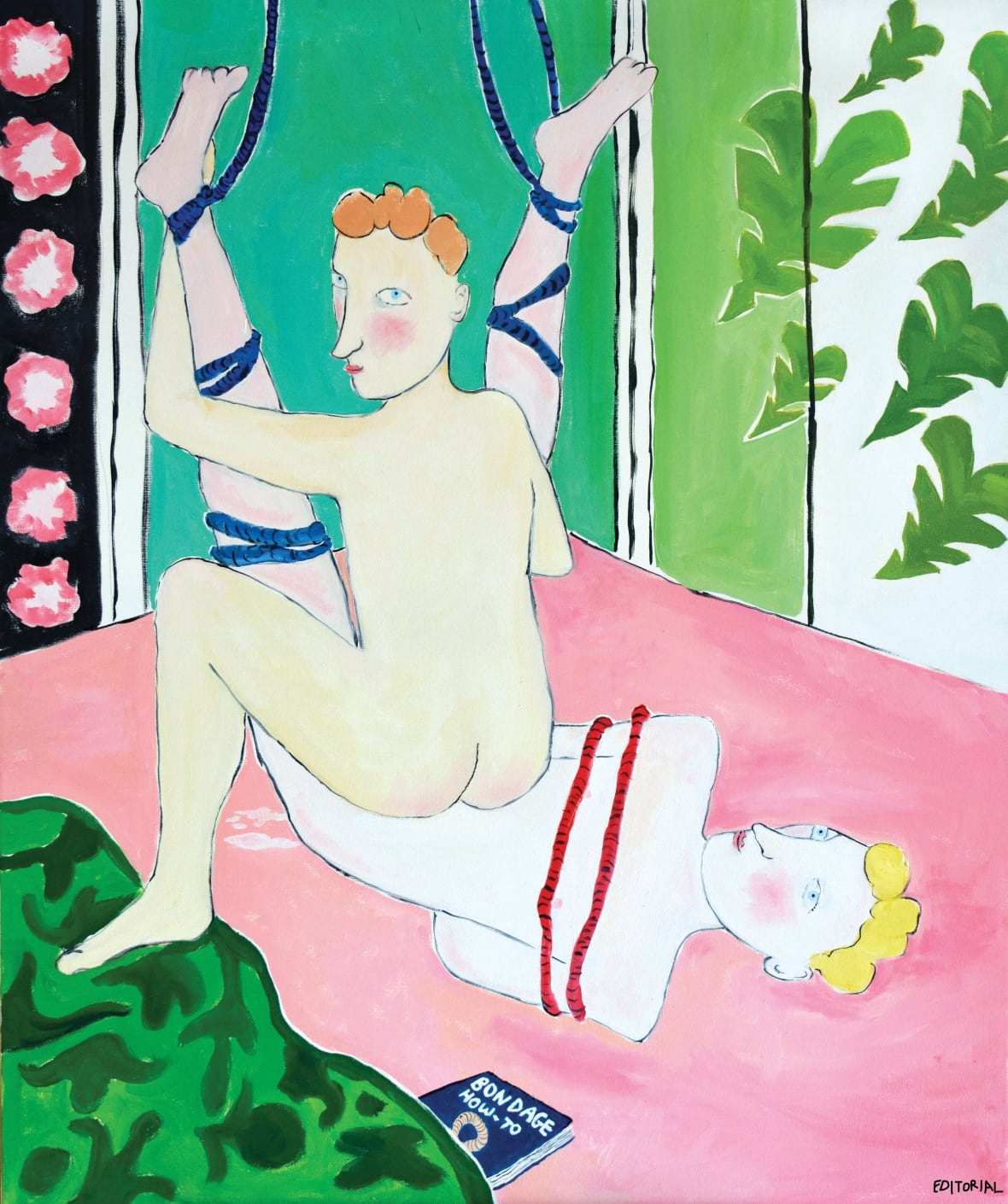 “When I first started with the sex drawings I wanted people to laugh and ask themselves, ‘Why is this funny?’ And maybe it’s funny because the gender roles are switched, but it shouldn’t really be funny. It just seems absurd, but it’s not absurd at all,” she says.

She’s a fan of naïve art’s sincerity, something she’s written about in her magazine, and her oil paintings fit the genre. They’re colourful, flat, cheerful — which makes Poor Gray’s glamour-boy world seem as jokey as it is inviting. 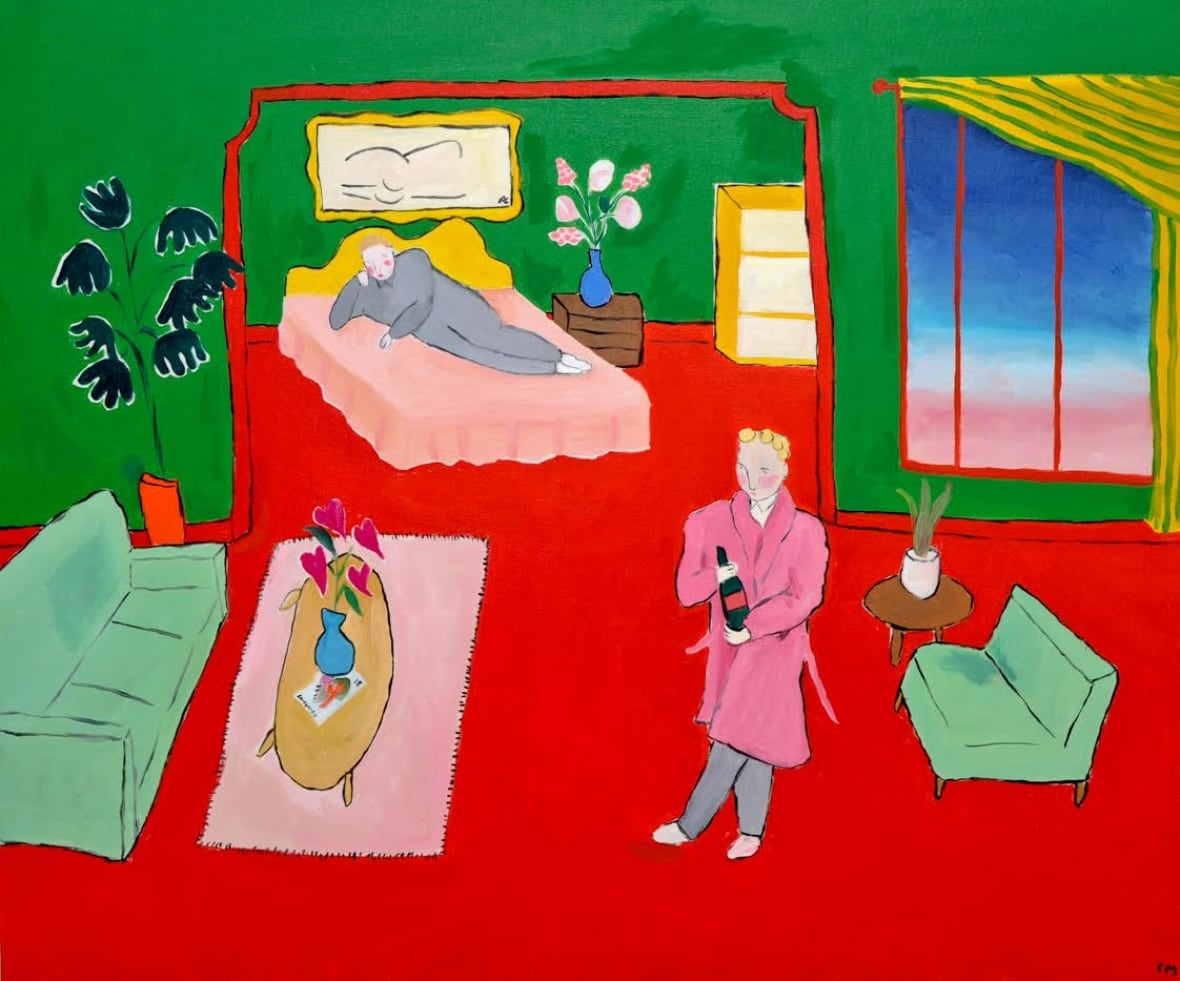 Milbrath’s a self-taught painter. “At the beginning, I really just wanted to replicate the old masters,” she says, and the more she studied, the more ammo she had for the project. The fashion photography grind had left her looking for an outlet to explore gender roles and sexuality. Art history provided some direction.

She says she became fascinated by the way rich men would boast about their wealth by commissioning portraits. “They’re usually standing up looking strong in front of a collection of whatever,” she says — books, more art, whatever proves that they have wealth and power. And if you have wealth and power, you get to control your image, so what if one stacked patron didn’t want to be like the other dudes? What if he threw out all the conventions of masculinity, and asked to be painted more like a woman instead — “effeminate, lethargic” but still flaunting his fancy digs? That’s Poor Gray. 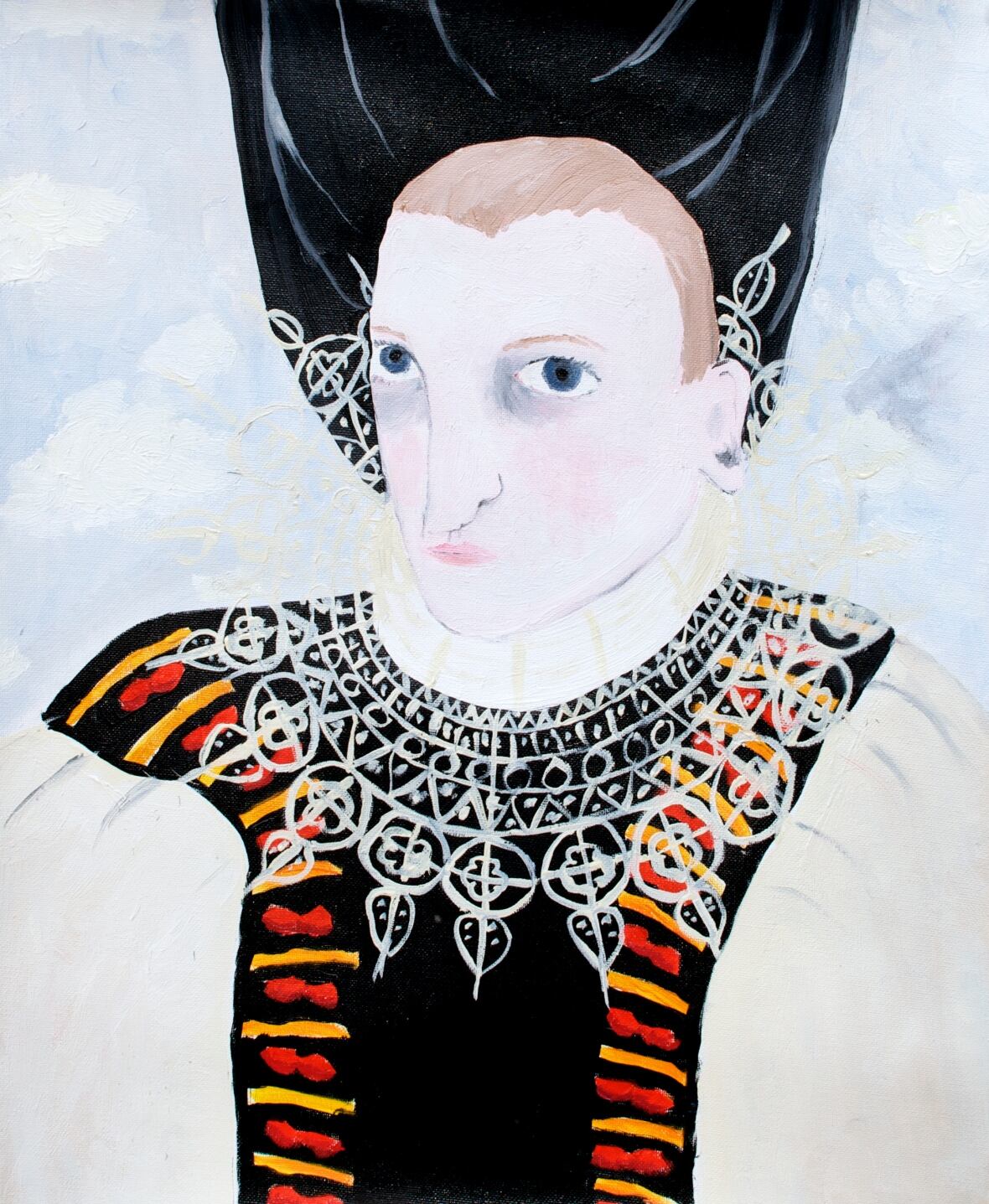 “I’m kind of making fun of him, but at the same time really relating to him at the same time,” says Milbrath. “The Poor Gray character is a bit of a self-portrait.” Like him, she’s all too happy to stay home all day, every day. “I can stay at home for 10 days straight if I have all the supplies that I need.”

“It’s kind of for me, and maybe for other women,” she says of why she paints him. “I couldn’t imagine painting a different subject.” 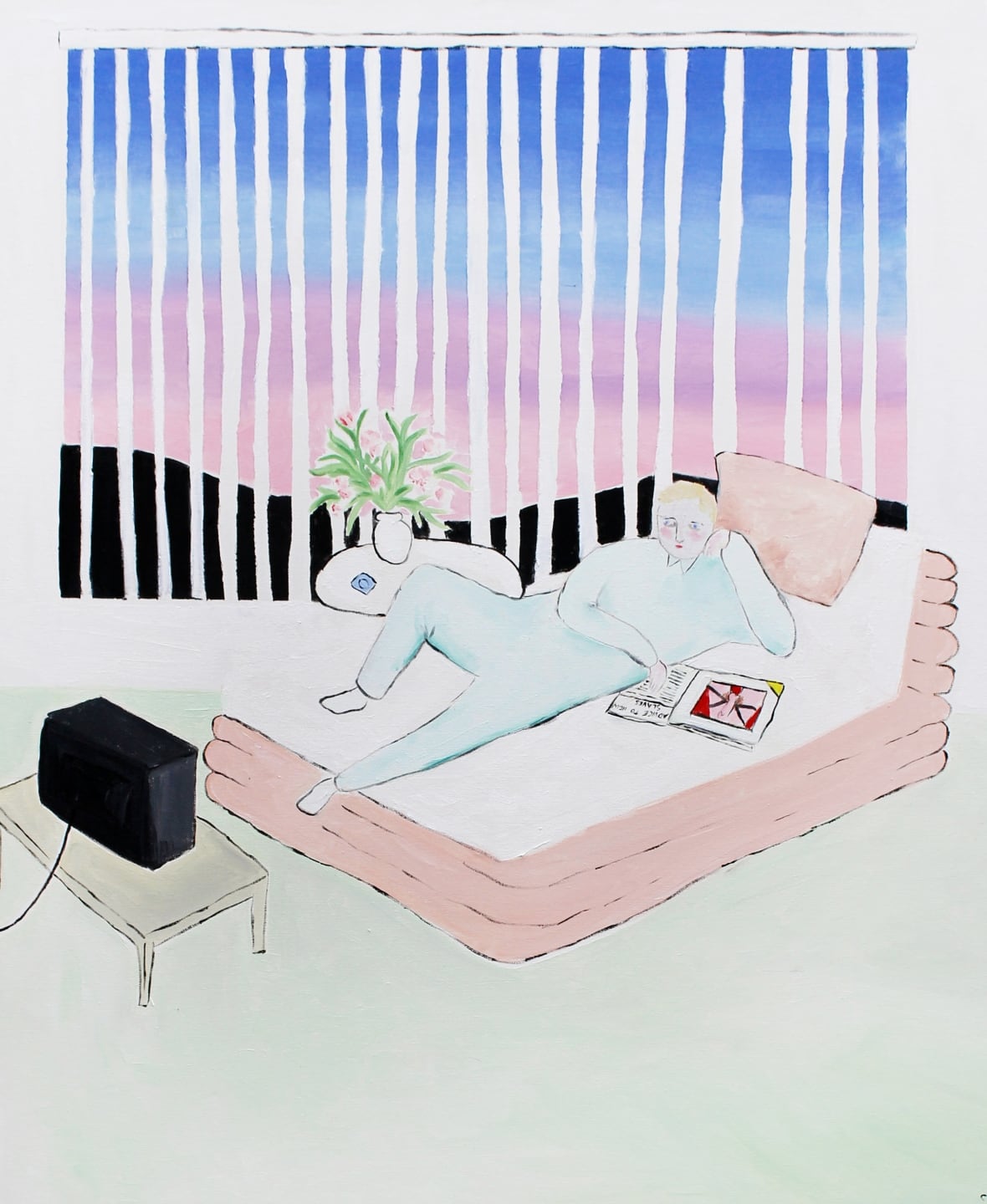 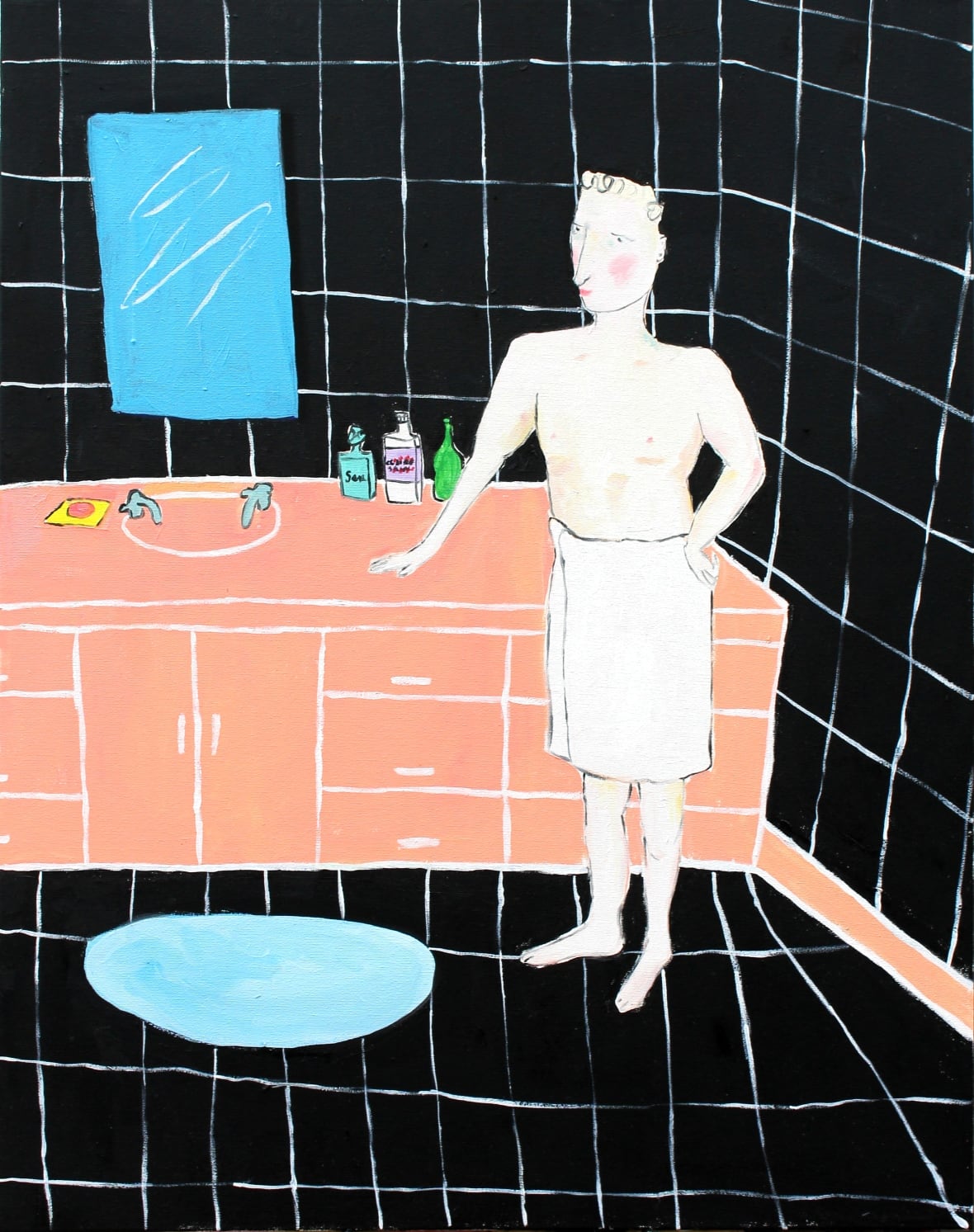 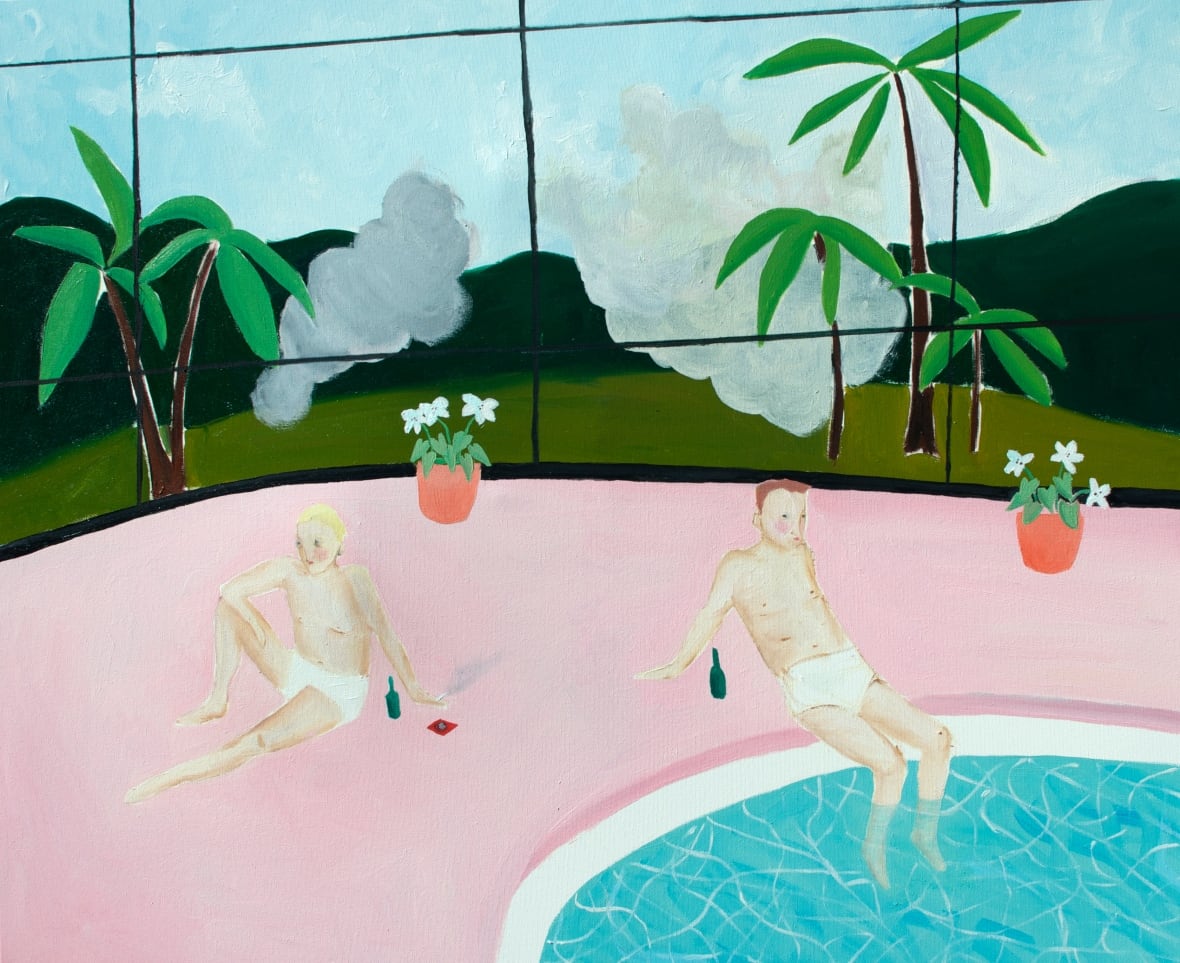