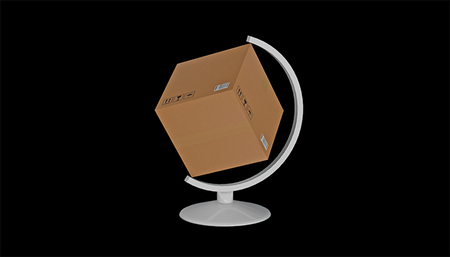 IN ADRIANA MARTÍNEZ’S 2016 video work Shipping and Handling, a familiar brown box rotates evenly, suspended in the pitch-black interior of a gleaming white stand. Bar codes are visible on several sides of this simulated cardboard cube, as are simple black images of arrows, goblets, and umbrellas—all graphics borrowed from the inscrutable iconography of packaging. Yet the real meaning of the work seems to lie not so much in these specific details but in the general allegory Martínez has constructed: The box stands in for Earth, our spherical home replaced with a generic cardboard package holding unknown commercial goods, positing the planet as one enormous commodity ready to be packed and shipped beyond any borders. International commerce—as the old adage goes—makes the world go round.

Born in 1988, Martínez is part of a younger generation of Latin American artists bringing a poetic, elegant, and incisively political awareness to the international stage. Raised in Colombia, she has never lived elsewhere. She studied art at the Universidad de los Andes in Bogotá, where she is currently based, and she shares a sensibility with the cohort of Colombian artists she works with every day—Santiago Pinyol, Mariana Murcia, Juan Sebástian Peláez, and Ana María Millán—as well as with Cuban artists such as Wilfredo Prieto, Humberto Díaz, and Rafael Villares. As a complement to her artistic practice, Martínez operates the art space MIAMI Prácticas Contemporáneas, a collaborative studio and project space that she founded in Bogotá with Peláez in 2011. The artist is also a part of the gallery Carne, which was established in 2014 to represent many of her MIAMI collaborators.

Though Martínez is solidly rooted in Latin America, her practice, as Shipping and Handling suggests, explores ideas that extend past national and regional boundaries. Indeed, she wrestles with the complex consequences of globalization—including the sometimes insidious effects of the international art market on local cultures—though she prefers slyly disruptive gestures conceived with a light hand over the more explicit ideological critique that largely defined a previous generation of politically engaged South American artists. Carne has subversively participated in several international art fairs by renting Airbnbs near the official venues and transforming them into alternative booths. By extending her art into sites of global exchange, Martínez is able to put into practice theories about cultural exchange and capital and to experiment with forms of display and presentation that feed back into her own work.

In temporal terms, many of Martínez’s artworks can be described as quick: Easily read, they come across as engaging in nimble jabs. She often writes out her ideas in lieu of more belabored studio processes such as sketching. She is not concerned with the traditional techniques required to realize her works—in our global economy, skills, like the commodities with which she often works, are easily traded. She often works with everyday objects, borrowing from our image-rich mass-market culture to comment on—and even track—the global proliferation of those very images.

In a single work, Martínez hoards, layers, collapses, and inverts familiar symbols and objects to create intense images saturated with referents. Her 2015 work Orión is a flag-like black cloth embroidered with glow-in-the-dark symbols in the shape of the titular constellation. In place of stars, Martínez has substituted the logos of international corporations and entities that use the astral bodies as their symbol—here, celestial navigation is commandeered by the logic of global capital. Easily spotted are the smiling face of the Carl’s Jr. / Hardee’s logo, the three-pronged Mercedes-Benz emblem, Walmart’s six-pointed asterisk, and the starry cluster of the Subaru shield. In the closely aligned work Bananas, 2016, Martínez covers the yellow surfaces of fake fruits with the small, round stickers of the companies that export them around the world. The decals become like stamps in an overcrowded passport, a reminder of the great distances and international borders that these simple commodities have to cross to come to “rot in foreign kitchens,” as Martínez put it to me during a visit to her studio.

Similarly, Al final del arco iris (At the End of the Rainbow), 2015, is a bundle of bills from Chile, Venezuela, Brazil, Colombia, Nicaragua, Costa Rica, and other Latin American countries arranged by color to form a spiraling rainbow held tight with a rubber band, as if it were about to be handed over in some minor drug deal. Martínez uses these currencies to gesture toward questions of capital and value, the accumulation of wealth, and regional economies both official and illicit. The work was also a literal (if modest) intervention in the broader systems of exchange that it seeks to address: The assembly of the work, which took two years, was completed by the need to exchange currencies and transport cash across national borders.

Martínez uses the image of a rotating globe on its stand again in Soft Drink, 2015. Here, she plays with the Spanish phrase tomarse el mundo, which can be translated as both “taking over the world” and “drinking the world.” In the sculpture, the globe is punctured by a candy-striped drinking straw: Consumption doesn’t just drive the world, it is our world. Indeed, Martínez’s visual interrogations are focused on the often profoundly imbalanced role played by Latin America—and Colombia in particular—within the global web of economic exchange. Beneath the surface of her playful propositions, she asks us to consider not only the monetary cost of international goods but also the real, human consequences of a global economic culture that privileges some and devastates others.

Jens Hoffmann is a curator and writer based in New York.