Carlos Martiel Makes Sacrifices with his Body to Criticize the World

A means to decolonize the thought and denounce the contradictions of our time.

Just eight years after graduating from the National Academy of Fine Arts of San Alejandro in Havana, the Cuban artist Carlos Martiel has gained a place in the history of his country’s art by positioning himself as a follower of a performance narrative inaugurated by Ana Mendieta and consolidated by Tania Bruguera.

In 2013, Martiel was awarded in Venice with the Art Laguna Award for his work Prodigal Son , obtaining the recognition of international critics. This year he returned to that city to participate in the Pavilion of Cuba with the exhibition Times of intuition , within the framework of the 57th edition of the Biennial that was inaugurated during the month of May.

Martiel uses his body in aggressive actions, which come close to sacrifice, as a means to decolonize the thought and denounce the contradictions of our time. On this occasion we talk with him about his work, the ideals that reside in it and some points of encounter between Mexican and Cuban societies.

What is the importance of performing corporal honesty exercises in this historical framework?

In life you have to do what you feel you should do, at the price that is necessary. One has to be consistent with the moment that has come to live. If you have the possibility of expressing yourself through art, why not? You have to take care of that responsibility, otherwise there’s a point where you’re extinguished inside. Because this society programs you to be against yourself. Artists and intellectuals must rethink reality, if not who does it? The politicians? The ordinary people who are buried in daily life, day to day slave? 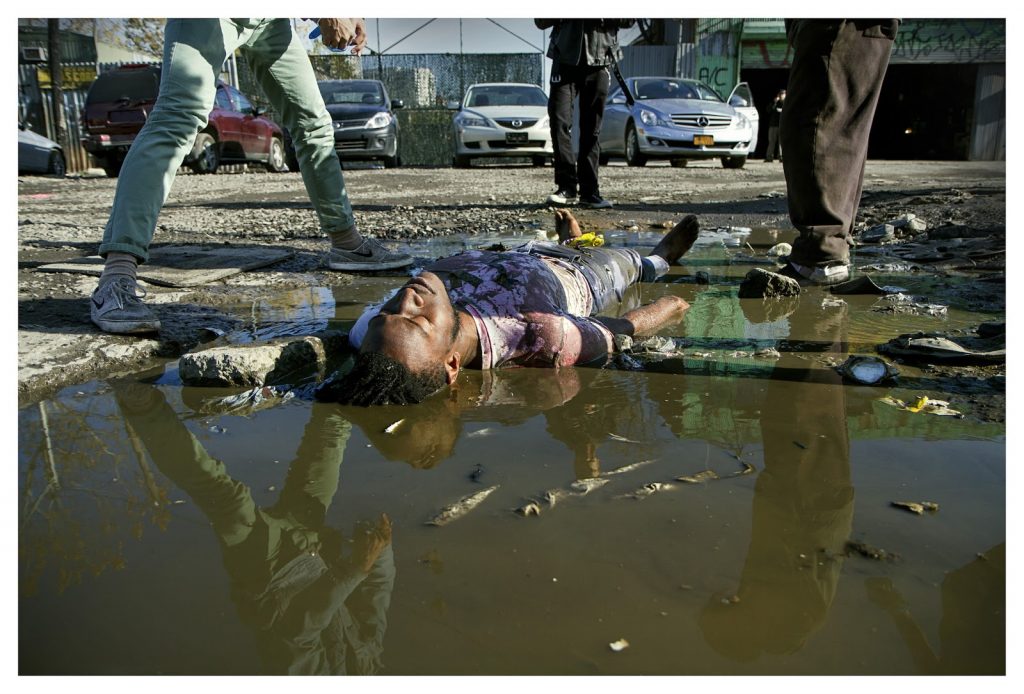 How is the release you intend to achieve every time you undress in front of an audience?

The naked has always been and will be a liberation for me. To undress is to remove filters, hierarchies of power, prejudices in relation to one’s own body and that of others . In an initial moment was the way I had to accept my body in a society that has stigmatized the Afro-descendant. Contradictorily it is also vulnerability, but sometimes one has to accept its fragility. It is part of the human condition. 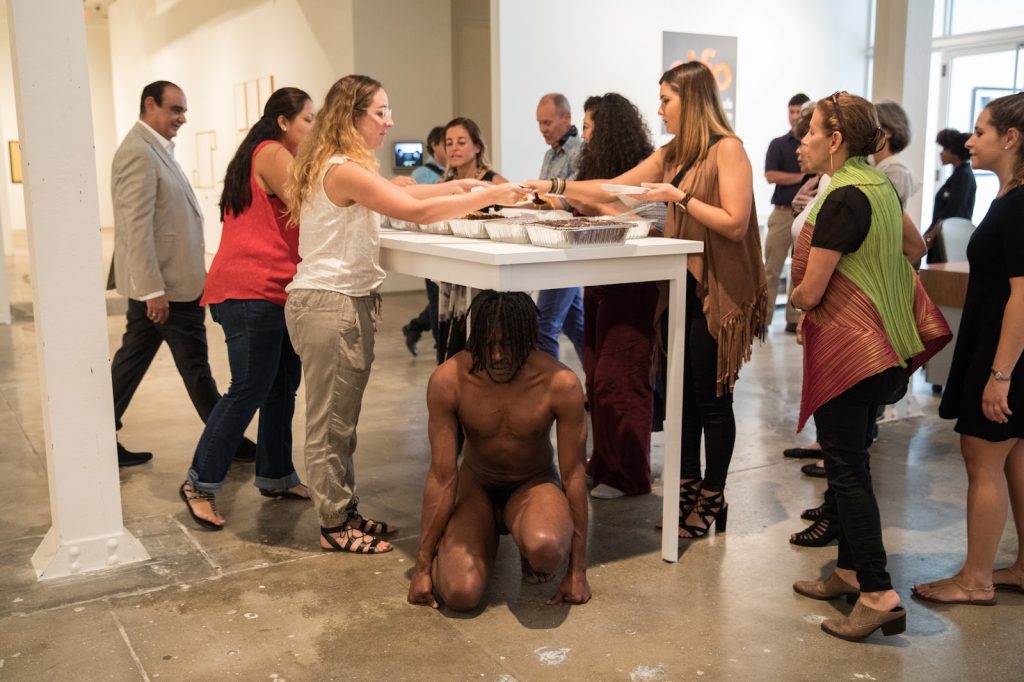 Your speech has been placed in a cross between the ritual, the abject and the anthropological. What elements of your cultural and personal reality motivated you to use your body as a political apparatus?

I began to work with my body because it allowed me to effectively criticize, reflect, or point out problems that have their root in being black. My work could not be otherwise because I was born in Cuba; Because I come from a family of Haitian and Jamaican emigrants; Because I never had any privilege. The performance was the only way I found to exorcise from my inner years of prejudices from others. The first works I made were drawings with my own blood on unconventional surfaces. It was getting harder and harder to convince the nurses in the public clinics to get me the amount of blood I needed, so it was my job to turn my work around and I began to look at my body as a subject and an object. 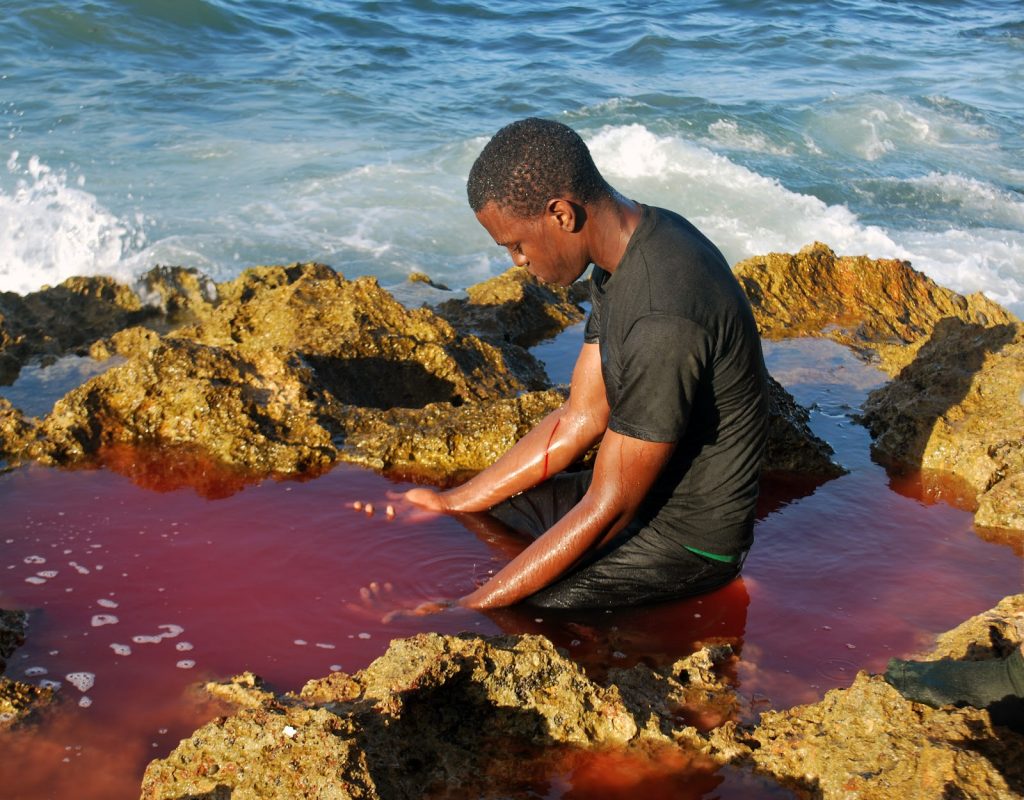 Mediterranean , the action you presented for the Venice Biennale, sets as a starting point the indifference that the Western powers have shown against the deaths caused by the African exodus to Europe. At what point did your interest in migrations begin? Do you include historical or nationalist antecedents when designing these performances?

My interest arose in Cuba. It seems absurd that people can not travel wherever they want. The insular condition of a country can not determine your life. Thus I developed my first works referring to the theme, Where my feet do not arrive , Isla Muerta or Subject . Then, when you submit to the challenge of being an immigrant, there is no way you can not work with the subject. At least for me.

This world is very divided. Xenophobia is part of the political campaign here, in the United States and in Europe. Mediterranean is a work that perfectly illustrates the current situation of African immigration to Europe, so many people dead, so much indifference … Who really does something for these immigrants? Who stops selling the weapons that have divided Africa? Who brings Africa out of multinationals that have Africans in misery? The real solution is not to rescue a few thousand of the sea of ​​which many are deported.

People do not leave their country if they have all their needs covered: people leave when there is hunger, misery, war, when their rights are being violated. And still one has to put up with an Italian saying to you: “Italy has only brought a wave of criminals, “ referring to the refugees or perhaps to me, who was the only black man in the airport line. That is nationalism and hypocrisy that has us hopelessly screwed. Because if we are going to talk about criminals, the first ones we have to mention are the string of bandits and assassins who came to America from Europe. 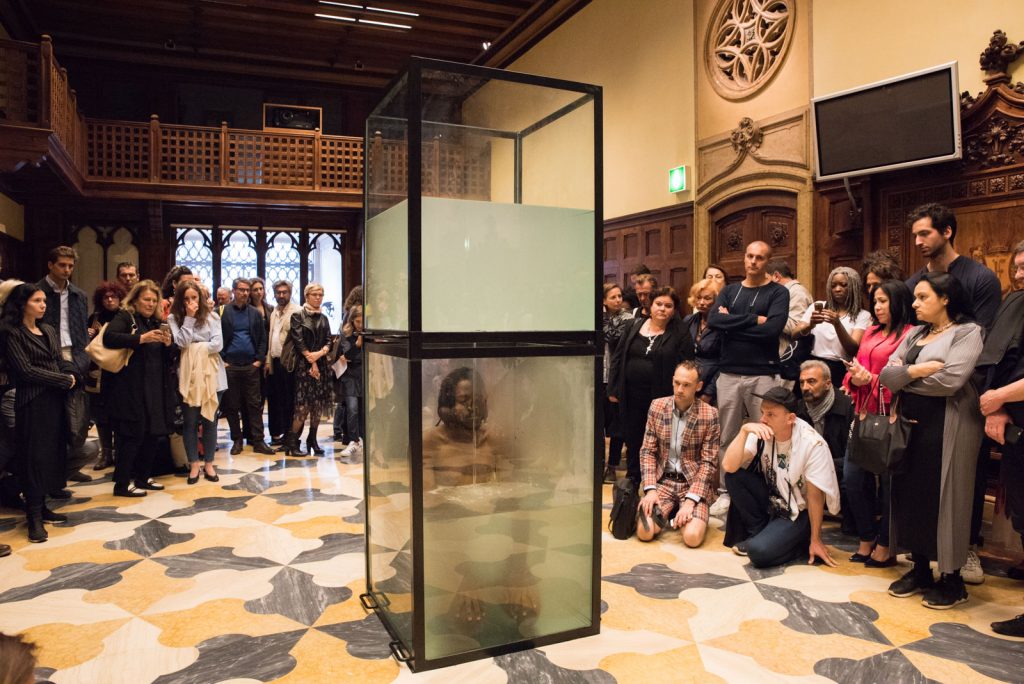 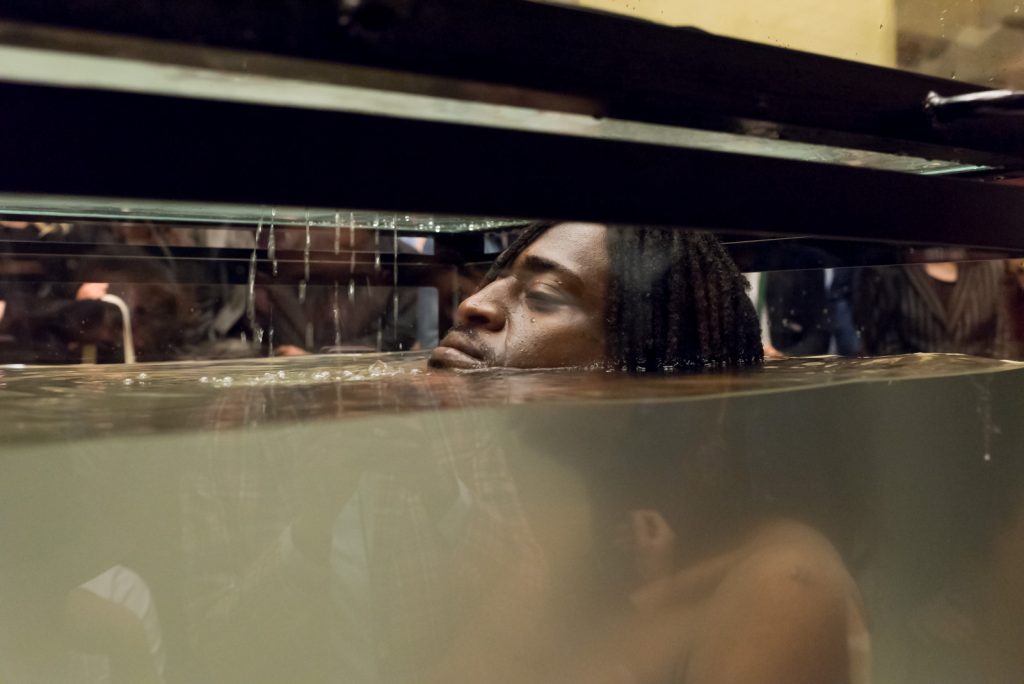 From the blood donated by an immigrant to your Seed to the food that a worker cooked for Basamento , the lives and events of the Mexican population are present in your work. What role does our country play for you personally and professionally?

I have memorable memories of Mexico, of its people, of those I met during my travels and those I have met in the United States. Unfortunately I’ve been physically only twice, though my work has shown up on more occasions. I really hope to have the privilege of returning to that country to work. 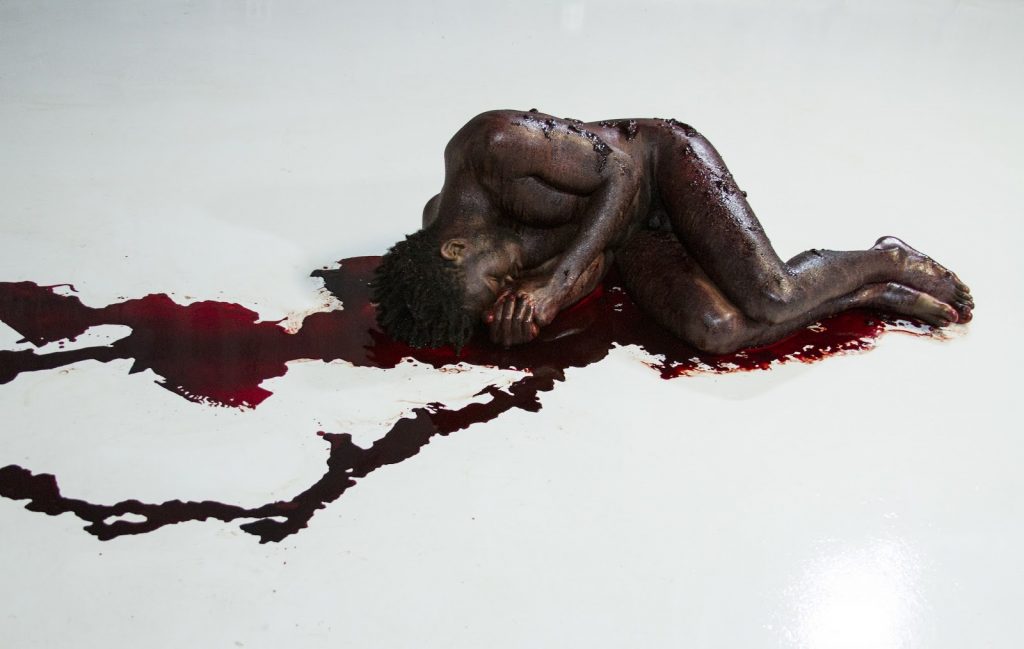 Last year you performed on the Avenida Alcalde de Guadalajara the Aparecido performance . Taking into account that you conceive of your public actions as monuments to specific contexts, what did you want to manifest at that moment?

In 2016, as part of a short-term residency, I was invited by the group Sector Reforma to Guadalajara where I made Aparecido , a performance that took place in the historic center of Guadalajara. The work consisted of walking naked from the Metropolitan Cathedral to the Government Palace of the city with my body covered with ashes of clothing donated by relatives of missing persons. This book is based on my research on forced disappearance in Mexico, a problem that is linked to the social situation of the country but also to the Government. 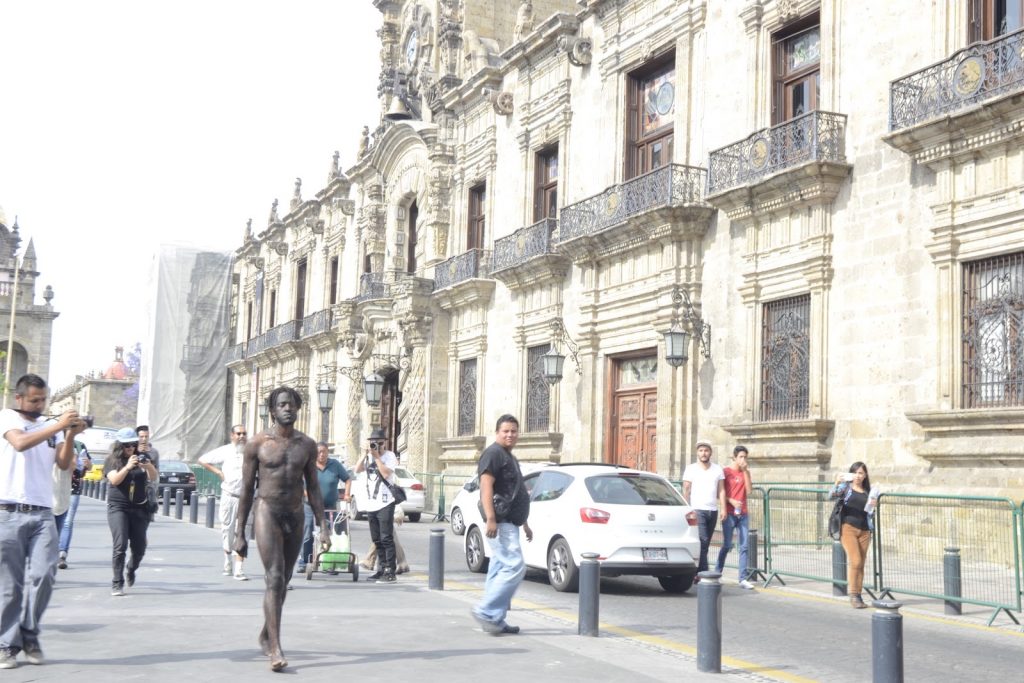 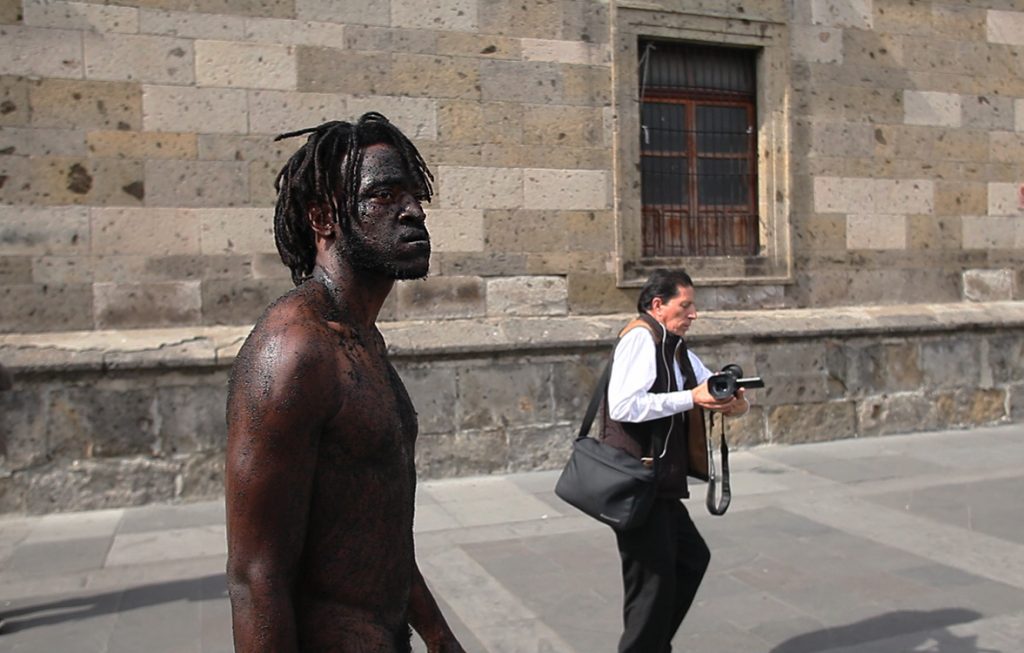 You have previously talked about the “global conspiracy” that exists to suppress the legacy and corporeity of the African diaspora. What do societies in Mexico and Cuba do to perpetuate racism towards Afro-descendants?

We are talking about completely different societies, culturally, politically and economically. Thus the way in which it has replaced racism in both is different, although they have their points of connections. In Cuba, despite the fact that racism is prevalent in the daily life of any black person, there is an egalitarian attitude on the part of the Government to pretend that this problem does not exist, which I consider to be a serious mistake. What there is no way to deny is that we are a mixed society, the Afro heritage is everywhere.

This is not the case in Mexico, where racism is not denied, but the Negro is denied. It is another face of racism that we see there. Communities of thousands of individuals who live on the margins of Mexican society and who are not recognized by the Government for the mere fact of being black. People who have lived in Mexico for centuries, that their grandparents and their parents were born there, but that is not enough to be recognized as Mexicans. If they are not from Mexico, where are they from? People who have no right to education, or health services, living on the margins of poverty. This is a very typical phenomenon of Latin American societies: the contempt and negation of Afro culture in its present traditions, in its present, the contempt for all forms of ancestry that is not European or obviously indigenous. 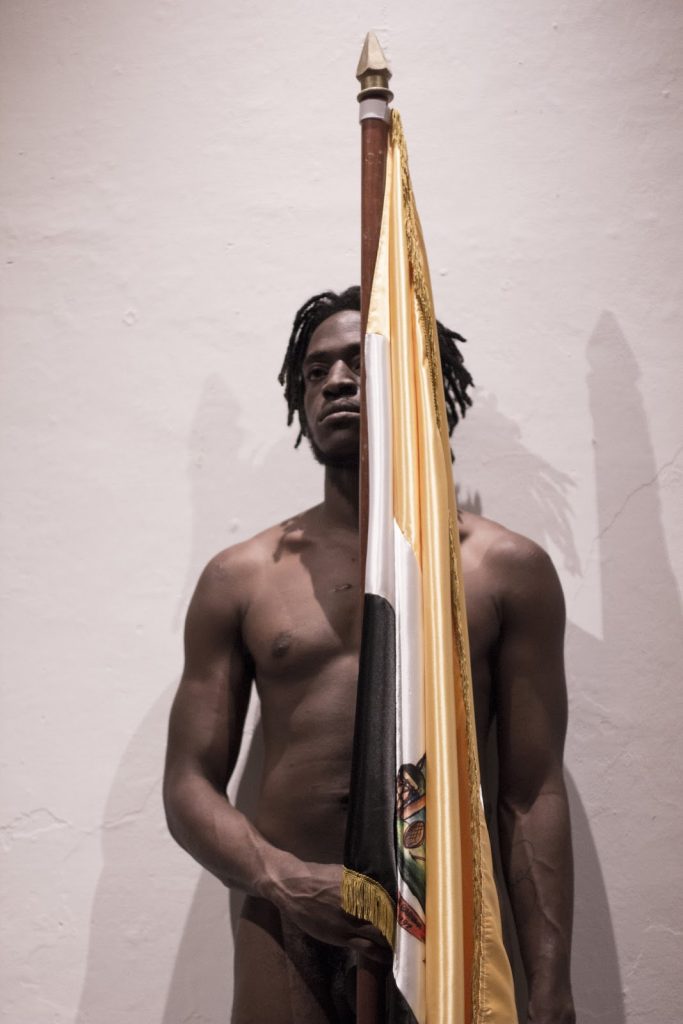 To know more about the work, projects and prizes of the artist, visit his site .