Jonas Lund’s performance turned the Photographers’ Gallery into an “influencing agency” like the ones active in the US presidential election and EU referendum.

As stalemate continues in the UK Parliament over how (or even whether) to leave the European Union, a leading pro-Brexit campaign group is upset that a Swedish artist tried to “reverse Brexit” at The Photographers’ Gallery in London.

The performance art piece by the Swedish artist Jonas Lund tried to raise awareness of how susceptible the public is to being manipulated online. The four-day event hosted by the gallery involved an influencing campaign deploying tactics used by both the “Leave” and “Remain” camps in the run up to the bitterly contested 2016 referendum.

Two years on from the polarizing EU referendum, calls are growing for a second, so-called “People’s Vote” on Brexit. Many now believe that public opinion was swayed in the first vote by fake news and targeted advertising using companies like the now-discredited data mining firm Cambridge Analytica. Lund is interested in how similar tactics and technology were used in the US presidential election. Russian meddling in the lead up to the election of Donald Trump is now the subject Robert Mueller’s ongoing investigation.

The pro-Brexit group Leave Means Leave objected to the art project’s attempt to disrupt the Brexit debate. It is now calling for The Photographers’ Gallery to be stripped of its public funding on the basis that the project constituted “political campaigning.” 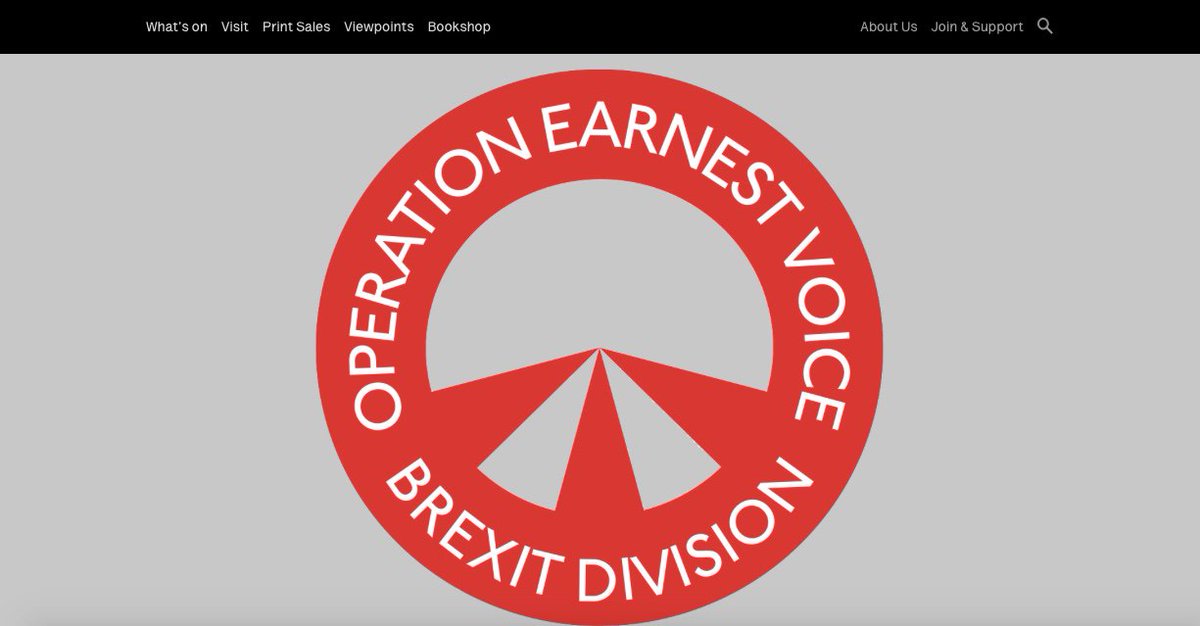 We have written to the Charity Commission regarding the anti-Brexit political campaign due to be held this week at The Photographers’ Gallery in London. The Gallery is a registered charity whose objects are to advance photography as an art form 1/4…

80 people are talking about this

Leave Means Leave shared its complaint to the Charity Commission on Twitter, writing that “funding anti-Brexit propaganda from a registered charity using taxpayer money is wrong, possibly criminal.” It called for an immediate investigation.

Contacted by artnet News, a representative for the gallery seemed unfazed. “While Brexit offered a topical and highly charged point of departure for the project,” the spokesperson said, “its wider aim is to expose and explore online manipulation tactics used widely by propaganda offices and individuals to sway opinion.”

They added that the gallery followed Charity Commission guidelines, consulted with Arts Council England, and sought legal advice to ensure that Lund’s project was compliant with all appropriate regulations.

Activism in the Arts

Lund called his project Operation Earnest Voice after a US-led campaign to spread pro-American sentiment on social media abroad. The campaign involves deploying false identities, or “sockpuppet” accounts, to comment on and derail online conversations in an effort to sway public attitude.

Lund told artnet News that one of the goals of his “influencing agency” was “to develop a campaign to influence and sway the public to facilitate a reversal of Brexit.” The third floor of the Photographers’ Gallery became a “fully functioning propaganda office” over four days concluding on Sunday, January 13. Twelve paid employees included influential image makers, such as the documentary photographer Alan Mozes, who worked on Hillary Clinton’s presidential campaign and Barack Obama’s re-election campaign. Lund’s crack team also included copywriters, social media strategists, and meme generators. They unleashed a variety of strategies to show how to disrupt the current debate. “Through the intensive collaborative, discussion, and work, we’ve explored many different facets of the tools for influencing and swaying a public,” Lund said.

The multimedia artist explained that the uncertainty and complexity of the Brexit debate made it quickly apparent that there were too many avenues the campaigning could take, so the operation pivoted into two different companies. There was a “for-profit influencing agency with a rigorous screening process of potential clients,” and a “not-for-profit foundation that distributes, facilities, and open sources the usage of various online tools for engineering consent online.”

Operation Earnest Voice (2019) is among an increasing number of contemporary artistic projects incorporating activism, with teams such as Forensic Architecture being nominated for the Turner Prize. “The social and political landscape has changed dramatically over the past three to four years and naturally artists are responding to this,” Lund said. “If we think of contemporary art as the reflection and abstraction of contemporary culture, it makes sense that there’s more and more movements towards artistic projects that incorporate activism. It’s definitely not something new and and to me art is always political.”

Lund thinks artists can inspire real change, and that many feel a strong urge to act as the world heads towards “darker times.”

“Art has the privilege of not needing to provide solutions but rather point towards and explore further problematics, and that’s a great way towards new ways of thinking and organization,” he said. Meanwhile, the Brexit crisis deepens, and the only certainty is further uncertainty.