From Hieroglyphics to Screen Swipes: Michael Staniak’s Paintings Track the History of Communication 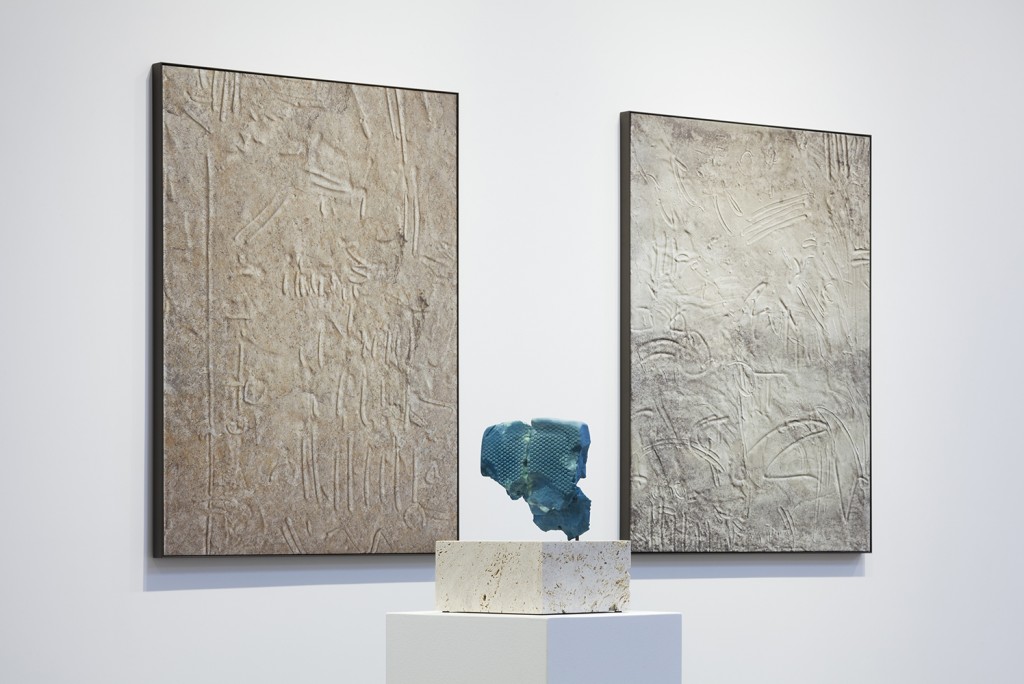 Nam June Paik made cellos, gardens, and visible magnetic fields using television sets. Cory Arcangel created digital “paintings” using Photoshop templates and Super Mario Brothers software. In March, Artsy and the Cooper Hewitt co-hosted the world’s first algorithm auction, in which lines of seminal computer code were sold as artworks. All of this is to say that, there are as many aesthetic responses to the effects of digital culture as the effects themselves. Some take technology as their subject matter; others take it as their medium. Michael Staniak, the Melbourne-based artist whose solo exhibition “Solid State” will open this Saturday at Steve Turner Contemporary in Los Angeles, does both.

In the nine paintings and six sculptures that comprise the show, Staniak builds on his established strategy of making rich, physical work loaded with the conceptual weight of digital technologies—those that structure our lives but remain mostly invisible to us. To make the paintings, the artist begins by mixing casting plaster and glue to create a heavy-duty, solid surface. Before it dries, he uses his hands to make abstract gestures based on those we use to navigate touch-screen devices: sliding, scrolling, pinching, double-tapping.

Next, Staniak subtly splices and collages stock images of rocks—reveling in the computer-facilitated ability to easily dismantle Earth’s toughest material—and then UV-prints the image onto the casting compound, so that the markings appear to be carved in stone. He finishes the work by spraying it with layers of acrylic paint. 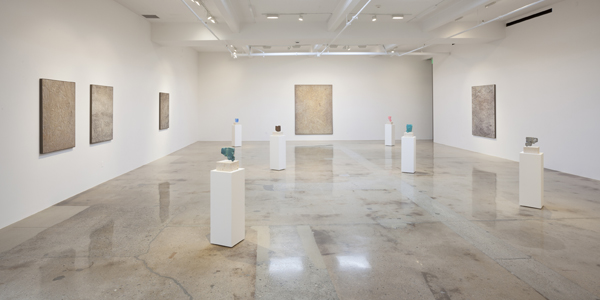 Staniak’s intellectual interest in digital media is longstanding; he earned his bachelor’s in the subject in the U.S. before starting art school in his native Australia. The questions behind much of his work, including the new pieces in “Solid State,” relate to the digital storage of information—its novelty, its potential impermanence, and its security risks. But he sees the continuous trajectory from our most ancient, tangible tools to our most cutting-edge, intangible technologies. Influenced by civilization’s earliest writing systems, like Mesopotamian cuneiform and Egyptian hieroglyphics, Staniak uses durable physical materials to record the fleeting motions that we now use to communicate through our phones, tablets, and keyboards.

He also explores the way in which computer coding languages are, like their pictographic forebears, only accessible to a select few in society responsible for archiving and safekeeping all of our data. Staniak points out that this process does, like his own practice, involve a concrete component. “It’s quite like alchemy,” he told Artsy. “Electronic data gets stored onto a physical object. Even the cloud is linked to a server farm somewhere.”

Despite his experimentations with and continued investigations of technology, Staniak is committed to manual effort; he calls his process “quite physically demanding.” His first career was as a professional tennis player, and he comes from the generation that, as he puts it, “learned handwriting.” For Staniak, drawing with his fingers evokes the creative urges of prehistoric peoples who chewed plants to make pigment and then smeared it on cave walls.

While, for these reasons, he doesn’t foresee his practice ever moving into the digital-only realm, he does acknowledge that many—or most—viewers will only ever see his work as reproductions on the internet, which he takes as seriously as the originals. “Living in Australia,” he says, “We’re quite far away from the main things that happen in Europe, America, and even Asia. So experiencing work does become an online thing.”