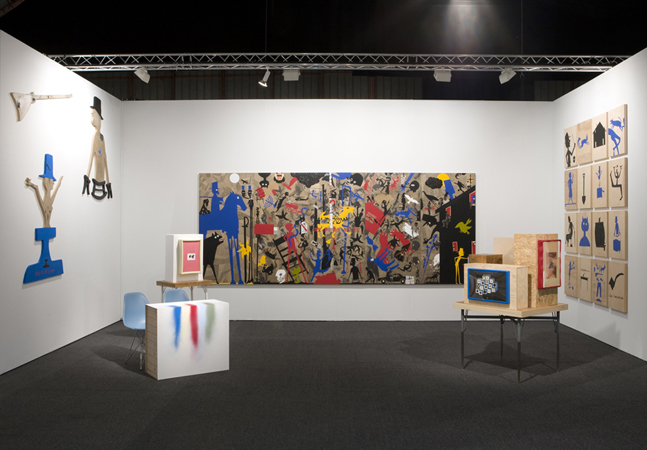 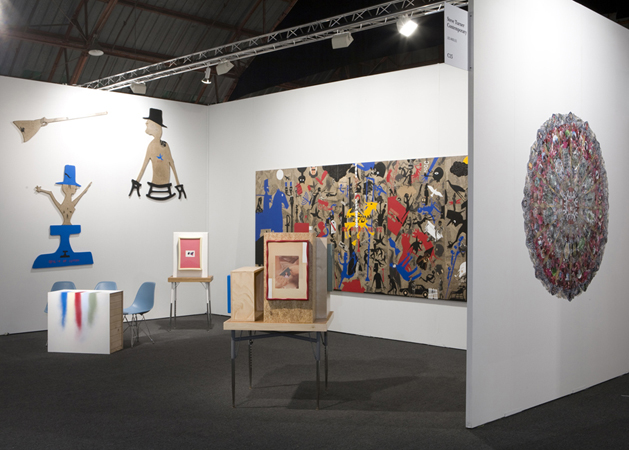 Deborah Grant will present a range of work from By The Skin of Our Teeth , a series based on the life and work of Bill Traylor. It is part of an ongoing project that Grant has labeled Random Select. Over the last ten years, Grant has deconstructed and then reassembled visual, historic, and literary material from unrelated sources to create her own non-linear narrative. In appropriating the artworks of famous male artists from the canon such as Picasso, Basquiat and Bacon as well as somewhat lesser known African American artists such as William H. Johnson and Bill Traylor, Grant has reworked images to address histories and narratives pertinent to her own life experience and identity.

For By The Skin of Our Teeth , Grant investigated the life and work of American artist Bill Traylor (1854-1949), a self-taught artist who was born into slavery on a plantation near Benton, Alabama. After emancipation, his family continued to farm on the plantation until the 1930s. In 1939, at age eighty-five, he moved to Montgomery, where he slept in the back room of a funeral home and in a shoemaker’s shop. During the day, he sat on the sidewalk and drew images of the people he saw on the street and remembered scenes from life on the farm, hanging his works on the fence behind him. That year, he met Charles Shannon, a painter, who brought Traylor art supplies and bought his drawings for nominal sums. During the next four years, Traylor produced between 1200 and 1500 drawings. In 1940, there was an exhibition of Traylor drawings in Montgomery, and in 1942, there was one in Riverdale, New York. The shows produced no sales.  In the late 1970s, Shannon, who had preserved Traylor’s drawings for over thirty years, began to show them to art dealers and museum professionals. This time, the drawings proved popular with critics and the public; two 1979 exhibitions at the R.H. Oosterom Gallery in New York launched a succession of almost forty solo shows and hundreds of group shows in the years since. Traylor has become among the most highly regarded and sought-after of self-taught artists. His work is held in many public collections including that of the Metropolitan Museum of Art and the Museum of Modern Art. The Montgomery Museum of Fine Arts, with thirty-one drawings, and the High Museum of Art, with thirty-five, currently hold the largest public collections of Traylor drawings. Traylor is known for his intriguing use of pattern versus flat color, a sophisticated sense of space, and the simplified figures that give his work a startlingly modernist look. Using a stick for a straightedge, he created geometric silhouettes of human and animal figures which he then filled in with pencil, colored pencil, or poster paints.

Morgan Wells will present two sculptural works that house collages as well as Art Fair Desk #3. Wells uses disparate materials including found wood, trashed furniture, painted particleboard, and leftover scraps from previous projects. These objects both house work and are works in and of themselves. Born in Los Angeles in 1980, Wells earned a BA from the University of California, Los Angeles (2006) and an MFA from the University of California, Irvine, (2009). His work has been exhibited at LAXART, Los Angeles; Inmo Gallery, Los Angeles; The USC Roski Fine Arts Gallery, Los Angeles and The University Art Gallery, Irvine. He will have his second solo exhibition at Steve Turner Contemporary in October 2012.

Jemima Wyman will present a kaleidoscopic wall-sized collage comprised of hundreds of photographs depicting different people in camouflage. These anonymous figures form a mirage of patterns within the form of a rosette window. Wyman was born in Sydney in 1977 and currently lives and works in Brisbane and Los Angeles. She completed a Bachelor of Visual Arts at Queensland University of Technology (2001) and an MFA from California Institute of the Arts, Valencia (2007). She has had solo exhibitions at Milani Gallery, Brisbane, (2010 & 2012) and will have her second solo exhibition at Steve Turner Contemporary in November 2012.