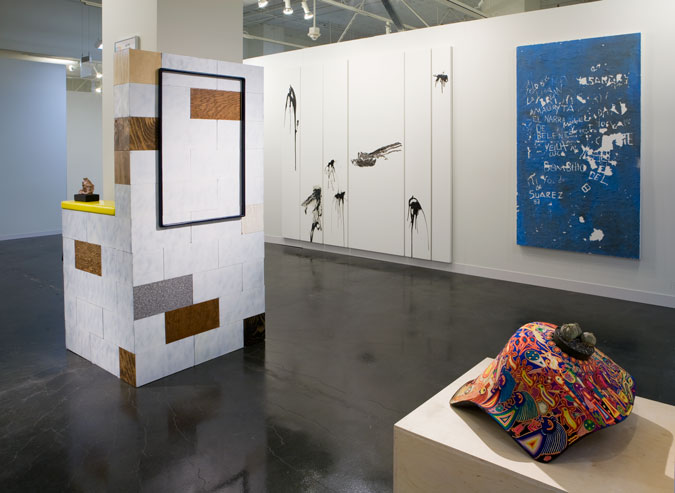 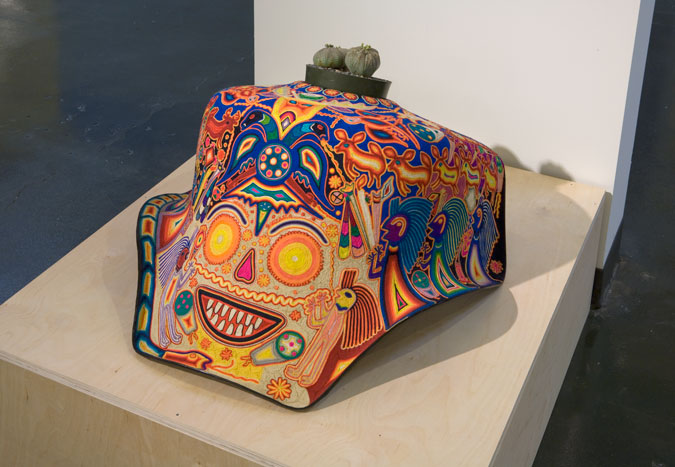 Steve Turner Contemporary is pleased to announce its participation in Art Platform, Los Angeles. The inaugural presentation of the fair takes place between September 30 and October 3 at the Merchandise Mart in downtown Los Angeles. The gallery will feature the work of seven artists, Edgar Orlaineta and Pablo Rasgado from Mexico City, Michael Decker, Lee Lynch, Morgan Wells and Rowan Wood from Los Angeles and Nevan Lahart from Dublin. In addition, Joshua Callaghan will present Two Dollar Umbrella, a new monumental work, on the first floor of the Merchandise Mart.

Edgar Orlaineta (b. 1972 ) creates works that recontextualize modern design to demonstrate aesthetic and social values. His solo exhibition, Solar Nothing , based on Charles Eames’ 1958 Solar Do-Nothing Toy, will be concurrently on view at Steve Turner Contemporary.

Pablo Rasgado (b. 1984) makes work that functions as an archive of contemporary human behavior. His process involves daylong wanderings in Mexico City and other urban centers where he searches for unusual occurrences within the metropolitan setting. When he finds something of interest, he seeks to record it, not in the typical manner of a photograph or other representation, but by extracting a subtle mark from the observed site. In so doing, he makes works that are at once poetic and visual as well as politically and socially relevant. Within his practice, he creates politically charged abstract paintings by using strappo , a Renaissance technique that enables him to extract painted/graffitied pictorial content from walls around the world. In so doing, he transforms political gestures into abstract paintings of transcendent beauty that make visible the paradox between a real event and the representation of it. Rasgado will have his second solo exhibition at Steve Turner Contemporary in July 2012.

Rowan Wood (b. 1977) creates paintings that address the limitations of language. Without relying on familiar forms, he seeks to evoke different, new or undefined experiences. He will have his second solo exhibition at Steve Turner Contemporary in March 2012.

Michael Decker (b. 1982) is a sculptor and installation artist who works primarily with found everyday materials. Previous works were comprised of Beanie Babies, pinecones, pillows, blankets, animal bones and ironing boards. To reflect the current instability in the world, Decker chooses materials that are accessible, adjustable and portable, enabling him to configure his sculptures under a broad range of circumstances. He will have his second solo exhibition at Steve Turner Contemporary in November 2011.

Morgan Wells (b.1980) is a sculptor, painter and installation artist who uses disparate materials including found wood, trashed furniture, painted particleboard, and leftover scraps from previous projects to create elegant architectural forms. At Art Platform, Wells has incorporated a pre-existing pillar in the center of the booth into one of his works. Wells is having his second solo exhibition with Steve Turner in October 2012.

Lee Lynch (b.1980) works in video, installation and sculpture. Lynch recently completed The Murder of Hi Good , a feature length dramatic revisionist western that relates the murder of California’s most infamous Indian hunter who lived in Tehama County in the 1870’s. The single channel video and installation relating to Lynch’s historical retelling are currently on view at Steve Turner Contemporary.

Nevan Lahart (b.1973) is a sculptor, painter video and installation artist who humor and irony to comment on current political and cultural happenings. He is currently in Los Angeles for a two-month residency and will have a solo exhibition at Steve Turner in October / November 2011.

Joshua Callaghan (b. 1969) is a sculptor and installation artist. Works develop out of his deep explorations within the city. Found hubcaps and feathers become spirit catchers; parking barriers become celebrated as stand alone works; and actual utility boxes in the city get camouflaged. For Art Platform, Callaghan has created a twenty foot tall two dollar umbrella, the type that litter the streets following a rainstorm.