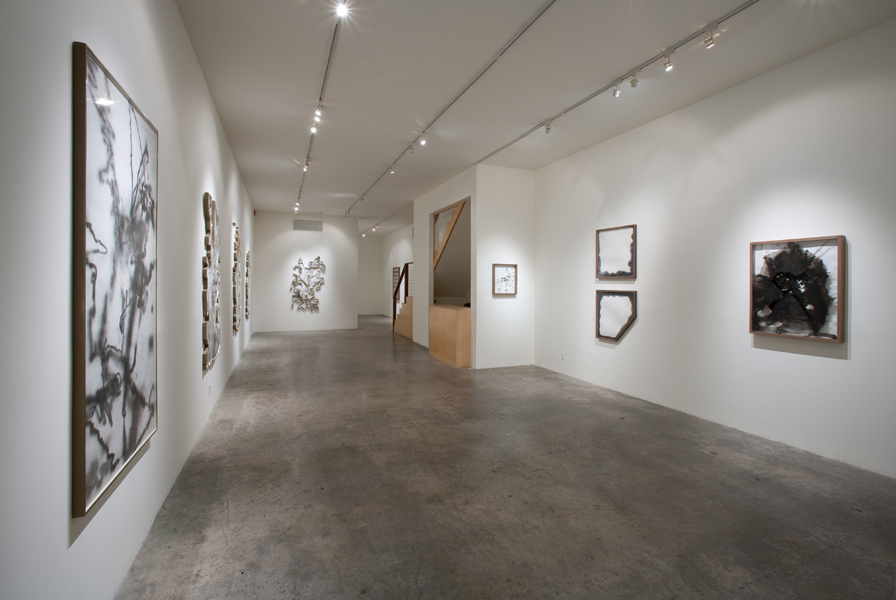 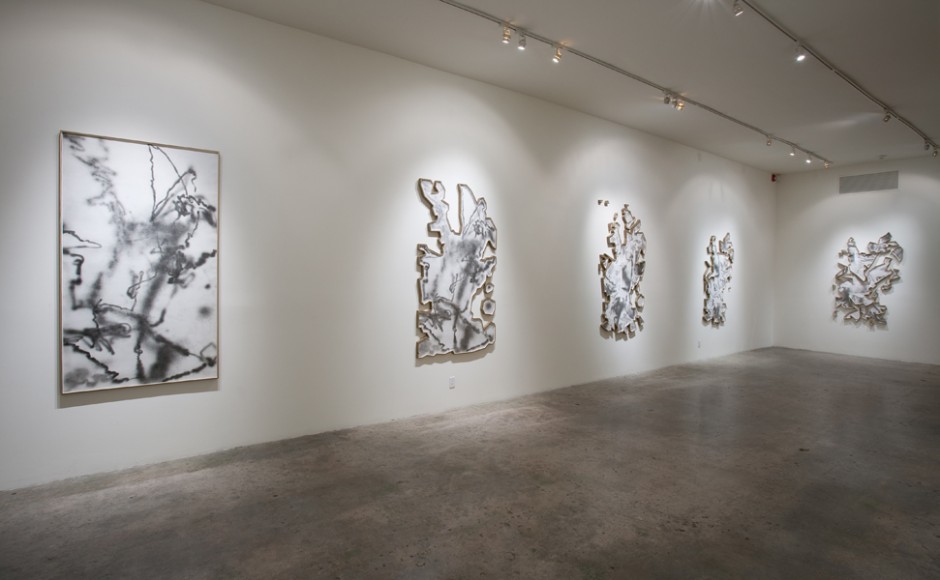 Steve Turner Contemporary is pleased to present Apples, an exhibition of fifteen collaborative wall-mounted sculptures by Eben Goff and Rowan Wood. Using a range of materials and techniques, the artists created multi-faceted sculptural works that house prints. The centerpiece of the exhibition, from which the show derives its title, is a constellation of irregularly shaped etchings set in welded brass polygonal frames that will be installed on two contiguous walls spanning more than forty feet.

Goff and Wood decided to collaborate following their discussions on printmaking and were particularly interested in how the action of the etching press creates a transformation between the artist’s initial gesture and what is transferred to a sheet of paper during printing. They saw this gap between the making and seeing of the work as a space for testing chance processes, and that the language of printmaking itself, where initial print results are called “proofs,” signals the medium’s essential dynamic of working from a proposition to a conclusion.

The artists were also interested to see how their separate art practices would influence the outcome of collaborative work. Wood makes paintings that often involve visual rules and logical progressions while Goff utilizes the laws of physics to create work. In working together, the artists melded their distinct approaches, thereby abandoning the central element of any solo practice–the right to make a decision for any reason, something they describe as “the caprice of individual impulse.” By contrast, working together to create a synchronized vision demanded mutual transparency of intent only possible by verbal proposal, negotiation, and agreement.

They approached the first works in their year-long collaboration in reverse order. Using completed picture frames that housed blank sheets of paper under glass, they used heat, pressure, and capillary absorption to cause pigment to be printed onto the blank paper through the glass. The second phase of work eliminated pigment from the equation. Using only the structure of the frame and its glass, by varying the degree of opacity, refraction and reflection, they created images in light and shadow. The resulting works became more sculpture and less print as they increased the distance between the glass and the sheet of paper inside.

In the third phase of their collaboration, the artists etched into and printed from an aluminum sheet according to a set of rules that unpredictably determined the quality, size, and shape of the printed images. The genesis for this final work, Apples, was an orchestrated sequence of chance processes involving states of invisibility: Just as the alumnium plate passed under the press, out of sight, the artists made compositional changes while wearing blindfolds. Apples consists of forty-one monoprints, each housed in a sandblasted brass frame that closely surrounds the contours of the print. More than the sum of frame and print, the artwork is a complex pattern that arises out of a multiplicity of relatively simple interactions.