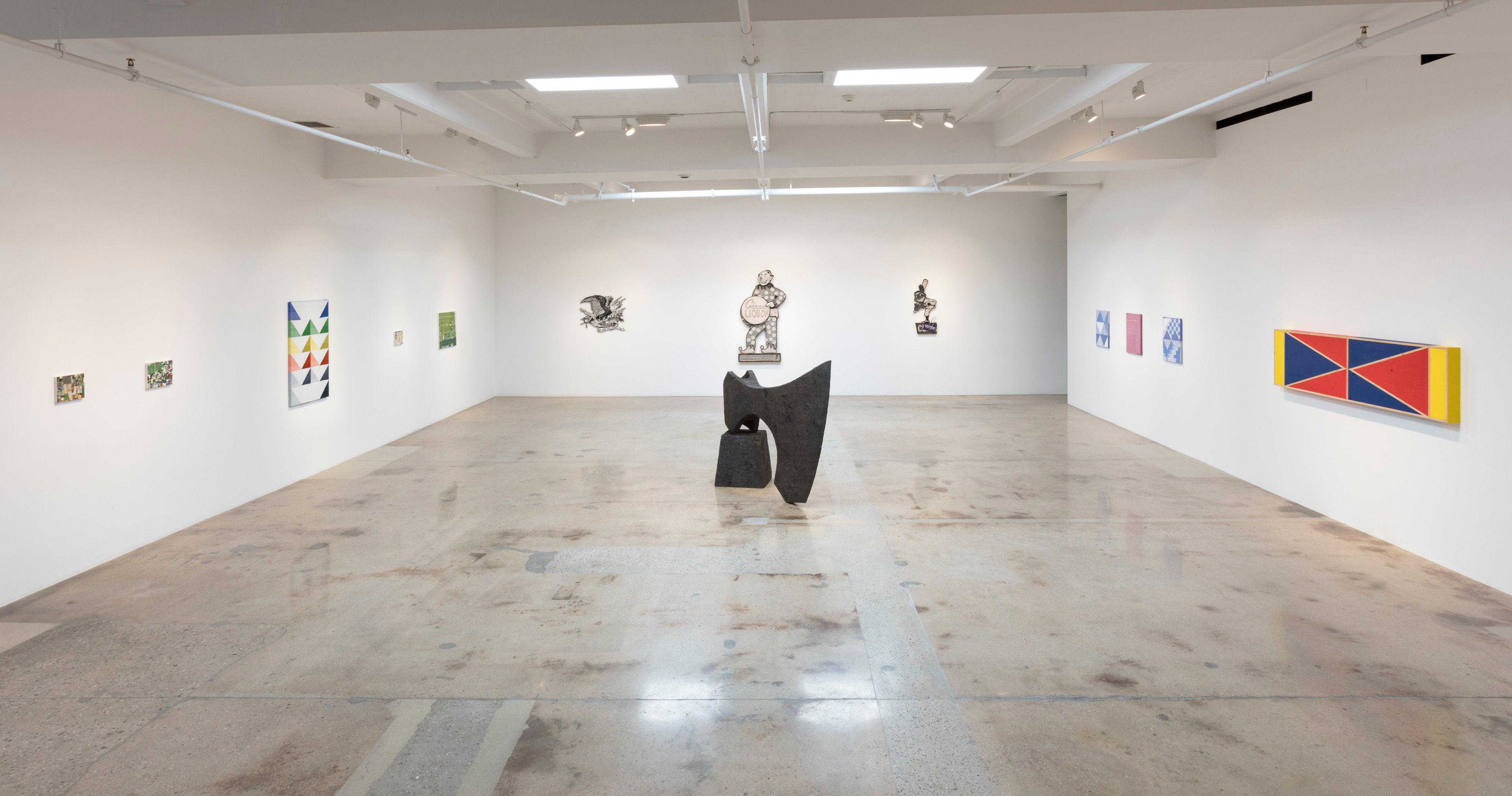 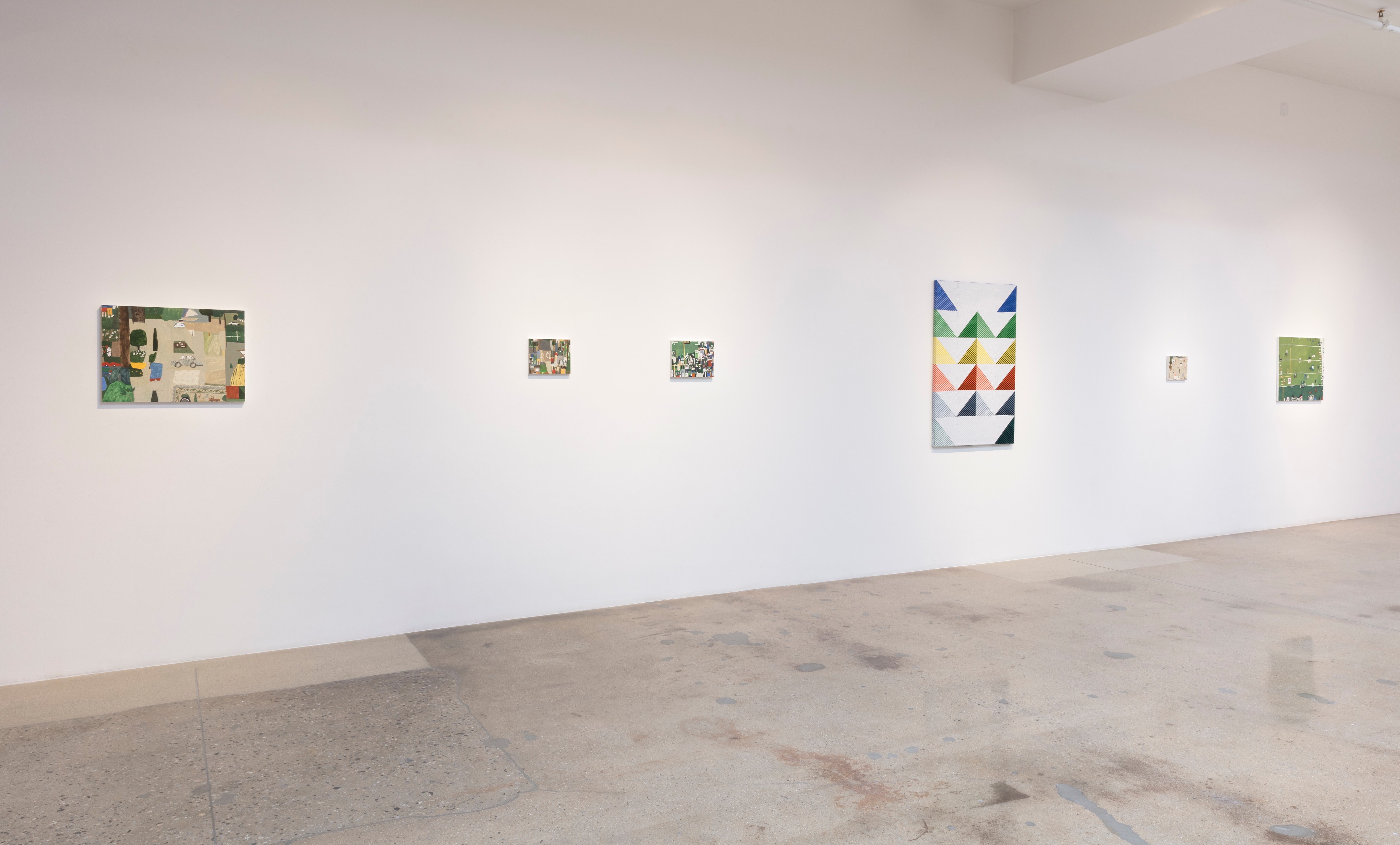 Steve Turner is pleased to present Inside Out, a three-room exhibition that highlights an unexpected revival of folk art. While all of the works included could be mistaken for folk art—or art by self-taught or outsider artists—the artists here (Samantha Bittman, New York; Mariel Capanna, Philadelphia & New Haven; Nick Doyle, New York; Hannah Epstein, Toronto; Lucy Fradkin, New York; Dahn Gim, Los Angeles; Ben Jackel, Los Angeles; G. T. Pellizzi, Mexico City and Camilo Restrepo, Medellín) are all art world insiders. For the most part, they attended prestigious universities–Rhode Island School of Design, Art Institute of Chicago, Carnegie Mellon, Yale, UCLA and CalArts as well as elite residencies like Skowhegan. Yet each artist has made the deliberate choice to sidestep much of his/her formal instruction in order to create works that instead involve such traditional craft techniques as weaving, pottery woodcarving or welding. Although some use painting and drawing, the emphasis is on work in three dimensions. Additionally, they use humble materials and handicraft skills; they make works that relate to everyday objects; and their works resemble classic folk or outsider art—but they are not. They are part of a movement away from technology and new media but they retain conceptual rigor and a societal/political purpose, making their iteration of folk art something new, something more than merely naive or primitive art for its own sake. By incorporating techniques and skills from the past to put forward current concerns and issues, these contemporary artists have found a way to refashion the “old” into something new, thereby tangibly linking the present to the past in fresh and engaging ways.

Samantha Bittman creates works that are composed of acrylic paint on portions of intricately patterned weavings that she creates on a loom; she then stretches them like a typical painting. The images continue onto the edges, yielding three-dimensional paintings that have complicated compositions that are slightly torqued from being stretched. While they are innovative with their combination of painting and weaving, they also are reminiscent of 19th century coverlets.

Philadelphia native Mariel Capanna creates paintings that are inspired by the long tradition of folk art, including painted furniture, frakturs, samplers, needlepoint and vernacular paintings, that has thrived in Pennsylvania during the last two centuries. Her fragmented compositions include country roads within green spaces, football jerseys and fields, and picnic scenes with bottles, pitchers, watermelons, tables and chairs. Pennsylvania artists from the past such as Edward Hicks and Horace Pippin come to mind, yet Capanna has updated their language for the 21st century while maintaining their sincerity.

Nick Doyle combines common hardware store materials with his interest in bygone American imagery–signage, advertising and cultural symbols. The combination yields objects that evoke both nostalgia and dread. While the past was not always that great and the future looks bleak, Doyle finds dark humor in the paradox of contemporary American life.

Hannah Epstein grew up in remote Nova Scotia before going to college in even more remote Newfoundland where she studied folklore and learned how to make hooked rugs. After getting her MFA at Carnegie Mellon in Pittsburgh, she added conceptual rigor to her practice and became, as she calls herself, “a feminist folklorist of the internet age.” Her hooked textiles of monsters, internet memes and historically-inspired creatures are both humorous and disconcerting.

Lucy Fradkin creates paintings with collaged elements that are inspired by early 20th century American advertising as well as Persian and Indian miniatures. She typically organizes them with a central figure which is surrounded by collaged elements cut from vintage catalogues and old books. The paintings have brilliant patterns that are balanced against a spare composition reminiscent of 19th century portraits by itinerant painters.

Dahn Gim was born in Busan, Korea, raised in Toronto and now lives in Los Angeles where she recently earned an MFA at UCLA. While she works in a variety of media–sound, video, textile, drawing, digital printmaking and performance– in Inside Out she will present her newest sculptural works which have sound. They consist of leather wrapped around parts of automobile mufflers. Where the edges of the leather meet, Gim has delicately sewn them together so that the muffler appears to have grown an outer skin. They have a an appearance that is both familiar and foreign which Gim likens to the process of adaptation that newcomers experience with respect to a new language, new people and a new culture.

Violence is the central theme in Ben Jackel’s sculpture. Over the past fifteen years he has produced by hand an array of weaponry and objects of military significance–drones, stealth bombers, battleships, cannons, helmets, halberds, and axes–in wood and clay.  For Inside Out he will present a giant-sized carved wood axe head that he shaped with an axe and then finished by rubbing graphite onto its surface. With its impressive size and finish, one might assume it to be an abstract sculpture, but from a distance it clearly is an axe head, and in the context of this exhibition, it might also be a 19th century shop sign for a blacksmith.

G. T. Pellizzi was born in Morelos, Mexico and studied philosophy at St. John’s College, Santa Fe before studying architecture at Cooper Union, New York.  While at Cooper Union, together with some other students, he founded the Bruce High Quality Foundation, of which he was an active member for seven years. He then commenced his solo practice which has been ongoing for the last eight years, and like his education, it combines philosophy with architecture. He uses basic construction materials and industrial flat paint to create sculptural paintings that rely on color theory to achieve great effect.

Camilo Restrepo creates works that represent the drug violence that for decades has besieged his native Colombia. Using techniques more often associated with sculpture, he creates large-scale drawings that highlight the materiality of paper by scratching, scraping and cutting into it. He erases with a precision knife leaving scars and wounds that remain visible. While Restrepo certainly is an art world insider (he earned two degrees in Colombia as well as an MFA at CalArts), because of the obsessive nature of his work, he can easily be mistaken for an outsider artist.