a river gets wide 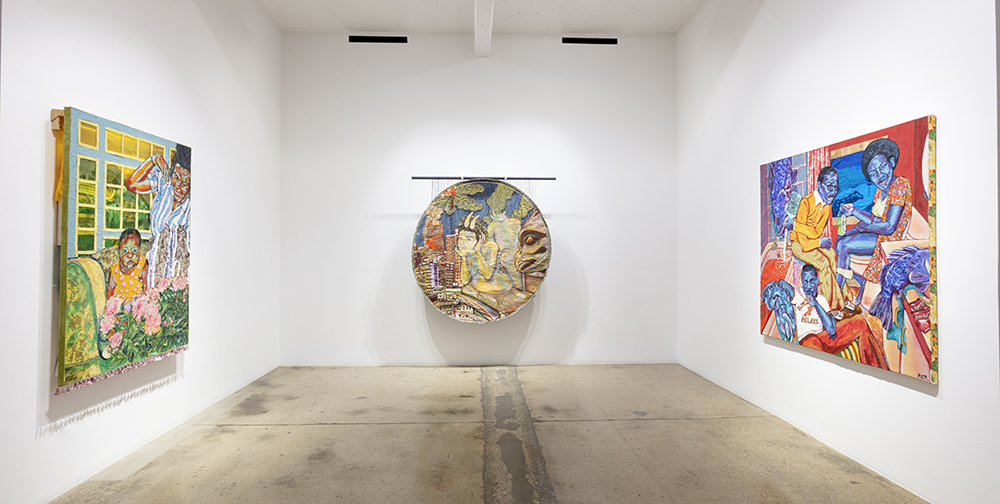 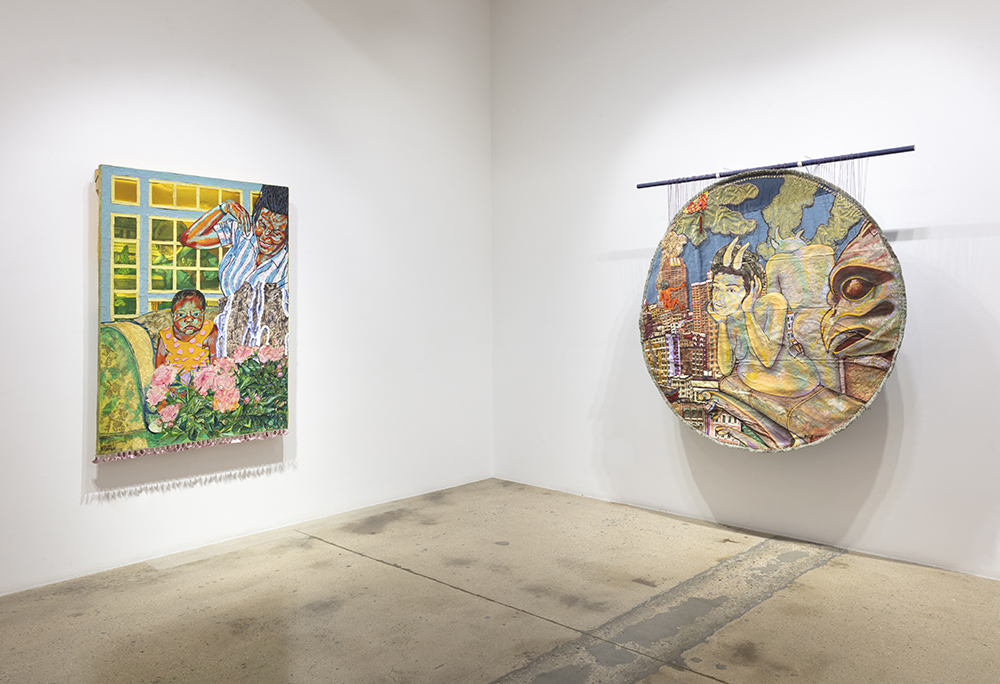 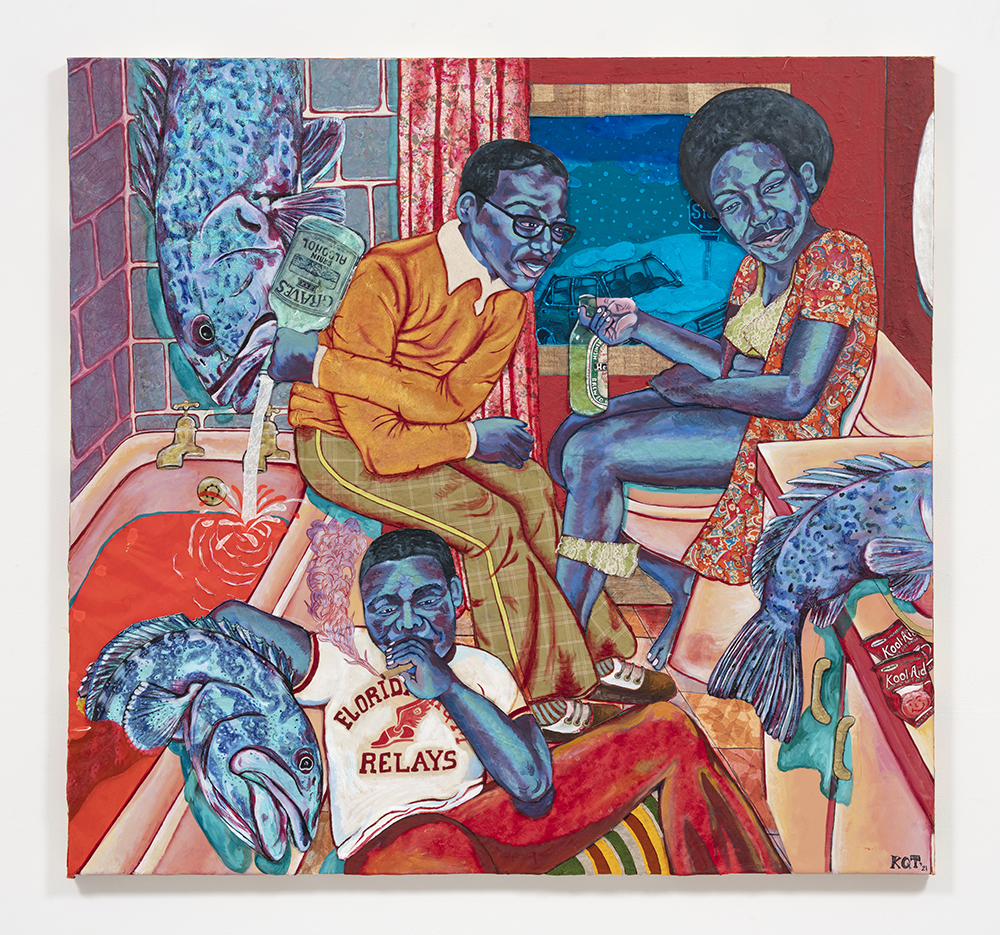 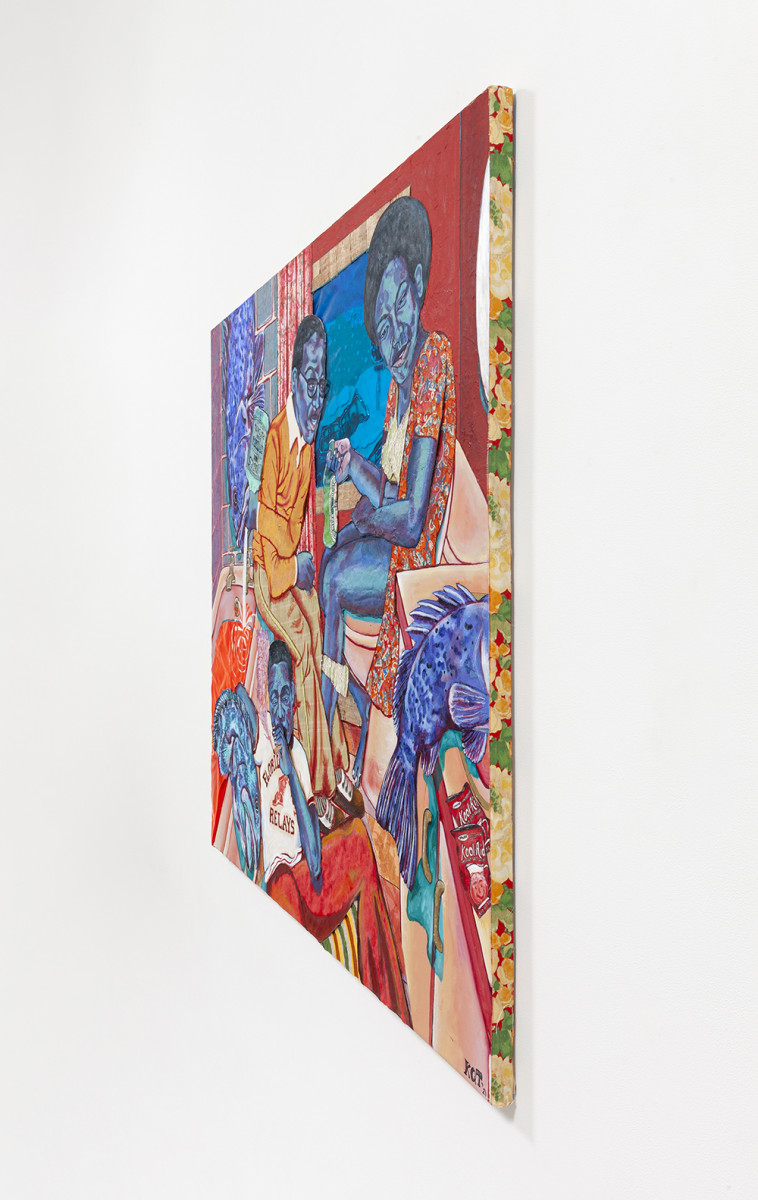 Steve Turner is pleased to present a river gets wide, a solo exhibition by New York-based Kiyomi Quinn Taylor that features three new paintings which combine drawing, painting and collage to create fantastical scenes of herself and family members. She utilizes an archive of family photographs of African American and Japanese relatives as well as episodes of family lore to represent anxiety, one that relates both to the uncertainty of the future and the brutality of the past.

Of the three paintings, Taylor wrote:

Happy Birthday, Baby shows me as a baby inside a peony bush. Roz, one of the many women who raised me, sits behind me smiling. The painting represents the nourishment of wisdom, knowledge, and affection provided by mother-figures. The background scene shows my father carrying the head of his dead brother like a football to suggest that death and danger are never far off.

Fortune Telling Groupers at Chill Phi Chill depicts three party-goers and three fish inside a red bathroom. The setting was inspired by stories my father told me of his experiences at Florida A&M University, an historically Black university, where he and his friends enjoyed a concoction of grain alcohol and kool-aid in their invented fraternity of Chill Phi Chill. The slippery fish represent the anxiety of an unknown future.

Swimming Upstream shows my grandmother as a gargoyle on the edge of a building that overlooks a cityscape. My grandmother, in old photographs, often wore an expression that I have come to characterize as “existential exhaustion.” I also depict myself, huge and red, scaling a building in the distance with smoke rising nearby from an unknown calamity. The painting considers the position of my departed grandmother, imagining her to have a glorious view of my life’s constant chaos.

Kiyomi Quinn Taylor (born 1995, South Orange, New Jersey) received a BFA from New York University (2017) and an MFA from Columbia University (2020). She has presented work in group exhibitions since 2016. a river gets wide is Taylor’s second solo exhibition at Steve Turner.

Kiyomi Quinn Taylor creates works that combine drawing, painting and collage to form fantasy narratives which conflate family history with dinosaurs and Star Trek. She utilizes an archive of family photographs from the 1950s to 1970s which features African American relatives in New York, and Washington State and Japanese ones in Fukuoka, Japan. To Taylor, dinosaurs represent anxiety, one that relates both to the uncertainty of the future and the brutality of the past, and Star Trek represents the magic of a future fantasy. By juxtaposing emotionally-charged fictional and factual and imagery, Taylor collapses time along psychic, genetic, and poetic lines.