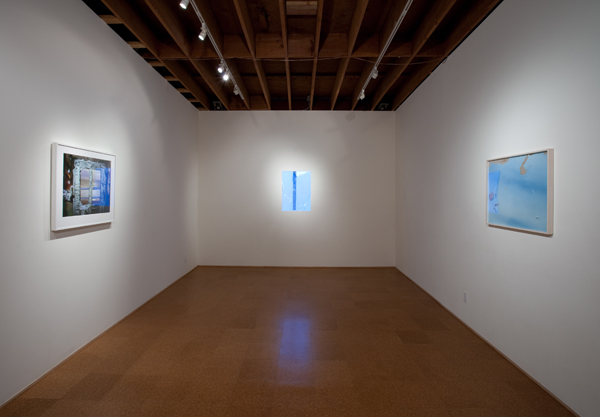 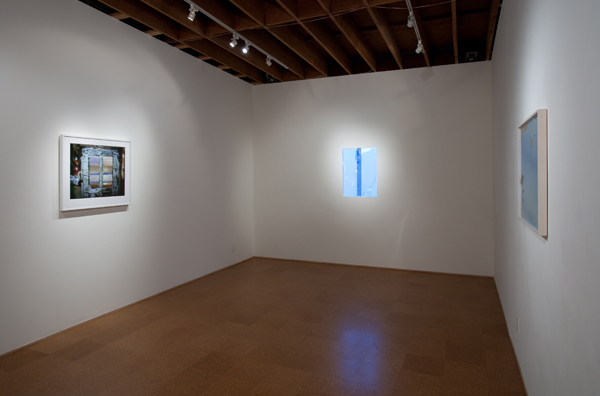 Steve Turner Contemporary is pleased to present L’idée Fixe, a group exhibition featuring a single work by three artists: John Divola, Sayre Gomez and Joe Goode. The works examine the window as the fulcrum upon which each artist balances the internal and the external; representation and abstraction; and the abject and the sublime.

John Divola will present a photograph from his Zuma Beach series in which the artist spray-painted the interior of an abandoned beachfront property which became the foreground for capturing a series of spectacular sunsets. The color gradients of the sky meld beautifully with the dilapidated interior, thereby conflating notions of the beautiful and the abject.

Sayre Gomez will present an architectural intervention, which will consist of a window installed directly into the gallery wall. In so doing, the work will expose a second window that was covered by the initial build-out of the gallery. The piece will allow natural light to filter into the room, light that is partially obscured by a tinted film that the artist distressed and applied to the inside of the installed window. In this work Gomez refers to both the history of abstraction and the legacy of the readymade.

Joe Goode will present a painting from his Vandalism series in which the surface of a painted blue sky is torn and scored to expose its underlying substrate. In this series, Goode continues to explore vandalized planes through painterly means. The tears within the painting cause a rupture in the vibrant field of blue, revealing the materiality of an otherwise perfect image. By intention, the piece is framed under glass so one may see one’s own reflection within the painting, an experience resembling that of looking through a window.

L’idée Fixe, which translates as “fixed idea” or “obsession,” refers to a 1927 René Magritte painting of the same title in which the artist used the convention of the window to present four clearly demarcated vignettes–a forest, a cloudy sky, a hunter and an apartment’s façade.

All the works included in this exhibition consider the window as a frame, collapsing two visual experiences into one. This framing mechanism creates an illusion, inviting viewers to be entranced by an abstracted image while suggesting that there is an entirely different experience beyond the wall on which each work hangs. John Divola received his BA at California State University, Northridge (1971), MA (1973) and an MFA at University of California, Los Angeles (1974.) Among Divola’s awards are Individual Artist Fellowships from the National Endowment for the Arts (1973, 1976, 1979, 1990) and a John Simon Guggenheim Memorial Fellowship (1986). Divola’s work has been featured in more than sixty solo exhibitions in the United States, Japan, Europe, Mexico, and Australia. His work has been included in more than two hundred group exhibitions in the United States, Europe, and Japan, including: Mirrors and Windows, The Museum of Modern Art, New York (1978), 1981 Biennial Exhibition, Whitney Museum of American Art, New York (1981), California Photography: Remaking Make-Believe, Museum of Modern Art, New York, (1989), The Photographic Condition, The San Francisco Museum of Modern Art, San Francisco (1995), Made in California: Art, Image, and Identity 1900-2000, Los Angeles County Museum of Art (2000), Architecture Hot and Cold, The Museum of Modern Art, New York (2000) and Los Angeles 1955-85, Centre Pompidou, Paris (2006.) Sayre Gomez received an MFA from CalArts (2008) and a BFA from The School of the Art Insitute of Chicago (2005). Recent exhibitions include Windows and Mirrors, Kavi Gupta Gallery and New Capital, Chicago (2011); ZZYZX, Las Cienagas Projects, Los Angeles (2011) and Self Expression or Fog and Other Works, Kavi Gupta Gallery, Berlin (2010). His work has also been included in California Dreamin’ curated by Fred Hoffman, Arte Portugal, Lisbon (2010); Other People’s Projects, White Columns, New York (2009) and The Awful Parenthesis curated by Aram Moshayedi, Cirrus Gallery, Los Angeles (2009). Gomez was included in the recent publication 100 New Artists by Francesca Gavin. Joe Goode attended the Chouinard Art Institute until 1961. His work was included in the 1962 ground-breaking exhibit New Painting of Common Objects, curated by Walter Hopps at the Pasadena Art Museum (now Norton Simon Museum). This historical exhibition, which featured works by Lichtenstein, Warhol, Dine, Ruscha and Thiebaud, was the first “Pop Art” exhibition in the United States. Goode has shown in hundreds of gallery and museum exhibitions worldwide- including solo exhibits at Michael Kohn Gallery, Los Angeles (2011), Franklin Parrasch Gallery, New York (2009), Los Angeles County Museum of Art (1992), as well as over a dozen exhibits at LA Louver Gallery, Los Angeles and James Corcoran, Santa Monica. His work is included in many major museum collections including the Los Angeles County Museum of Art, The Museum of Contemporary Art Los Angeles, the Menil Collection, The Smithsonian Institution, The Whitney Museum of American Art and the Museum of Modern Art New York.