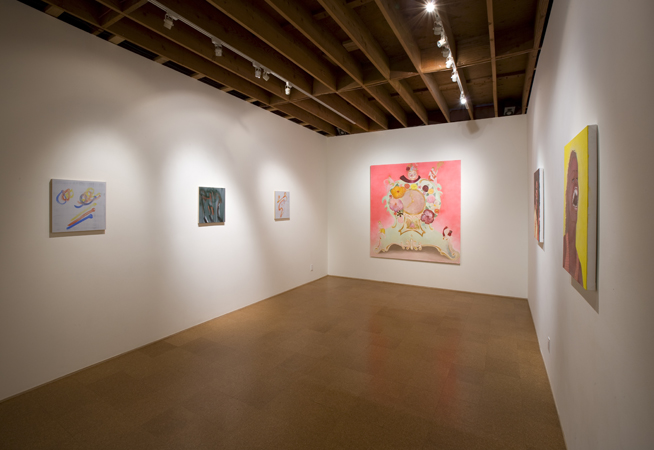 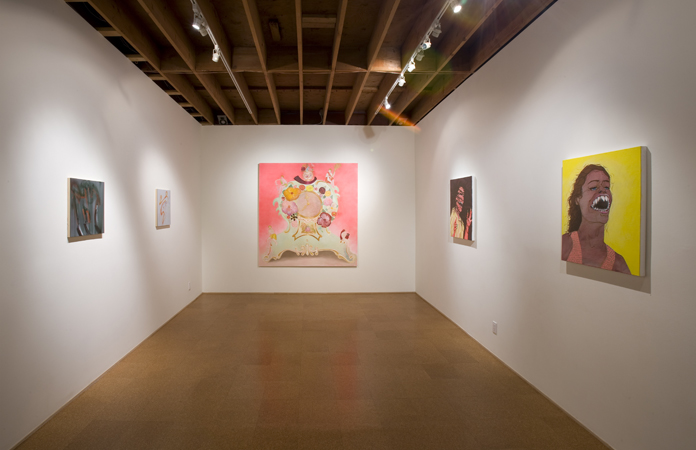 Steve Turner Contemporary is pleased to present Moxie, featuring paintings by three San Francisco-based artists: Courtney Johnson, Maysha Mohamedi and Sarah Thibault. All three artists recently earned MFAs from the California College of the Arts while working with painting instructor James Gobel. Moxie describes the gusto and fearlessness with which each artist pursues her painting practice.

Courtney Johnson paints gnarly women who seem to be in a state of wild abandon. The inhabitants of her invented world, unhinged and consumed by impulse, exist somewhere between reality and fantasy. She draws inspiration from the idea of feral women, great white sharks, Tina Turner, and the winning face of a beauty queen whose perfect facade has been shattered. Born in Roanoke, Virginia in 1981, Johnson received an MFA from the California College of the Arts (2011) and a BA from Prescott College (2004). She has had solo exhibitions at Park Life, San Francisco (2011) and Carville Annex, San Francisco (2010).

Maysha Mohamedi’s paintings refer to fate, emotion and consciousness. Her mark-making repertoire includes symbols culled from sources as disparate as a dictionary of shorthand notation and a personal collection of plastic knick-knacks. Recent works include An Extinguishable Future, Entertaining The Idea, My Jewish Husband’s Inheritance, When I Come Into Your Kingdom and If You Can’t Be Good, Be Careful. They reveal Mohamedi to be both playful and serious as she imagines a Persian avant-garde in which she inhabits the social and spiritual past of her cultural ancestors who valued imagination, leisure and nature. Born in Los Angeles in 1980, Mohamedi earned an MFA from California College of the Arts (2011) and a BS in Cognitive Science at the University of California, San Diego (2002). Prior to enrolling in graduate school, she worked as a researcher in molecular neuroscience where she studied the neural basis of addiction.

Sarah Thibault creates paintings inspired by the overflowing contents of tourist trade shops in San Francisco, especially those that have fake Rococo and Louis XV ormolu furniture and objets d’art. In depicting a flower and cherub-ornamented Rococo mantle clock using oil paint along with such everyday materials as spray paint, tin foil, chalk and graphite powder, Thibault addresses concepts that relate to status-seeking consumerism, kitsch and metaphysics. Born in 1980, Thibault earned an MFA at the California College of the Arts (2011); a BFA at the San Francisco Art Institute (2007); and a BA at the University of Wisconsin at Madison (2003). Her work has been exhibited at Mark Wolfe Contemporary, San Francisco (2010) and Jack Hanley Gallery, New York (2010).