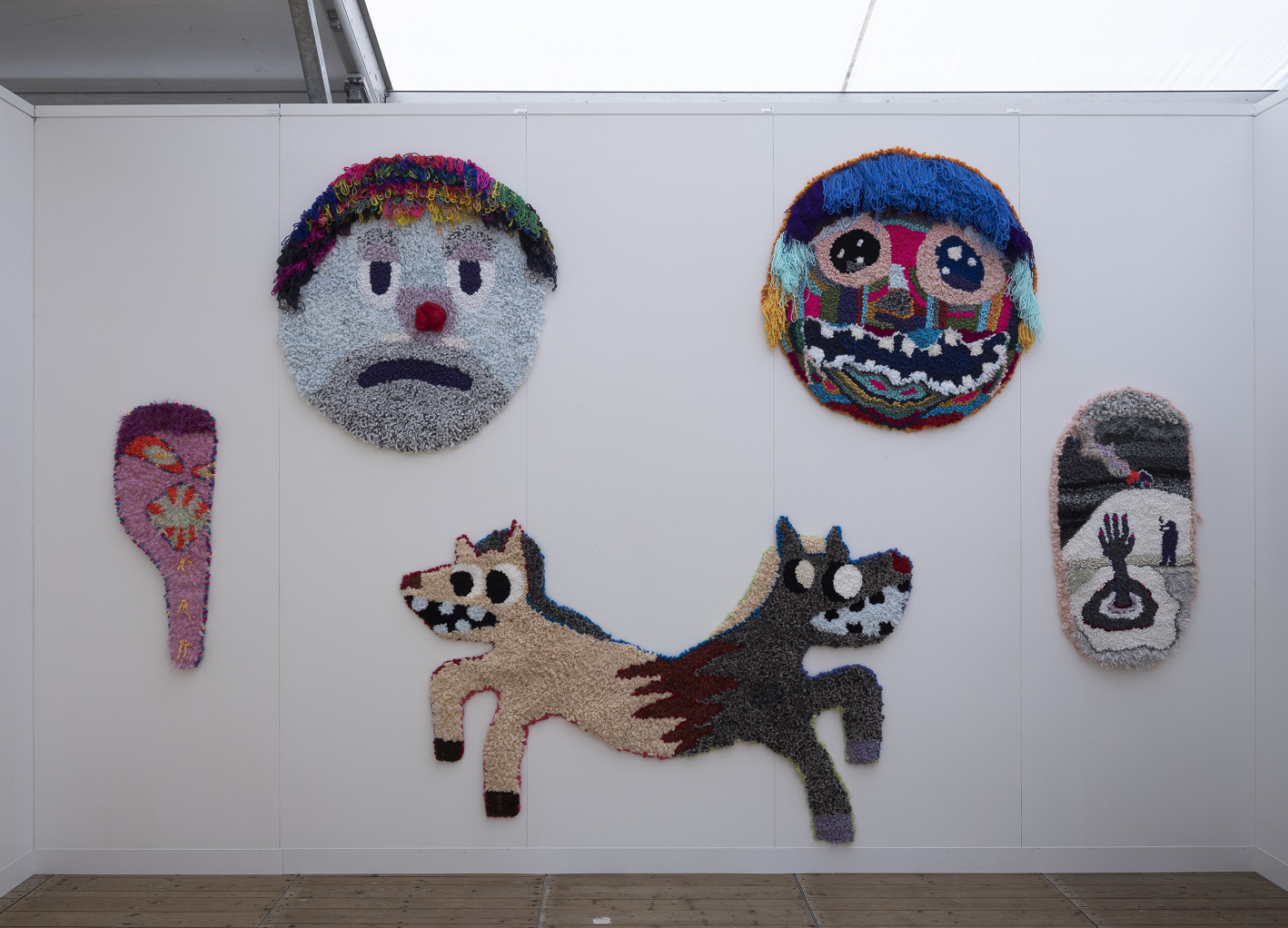 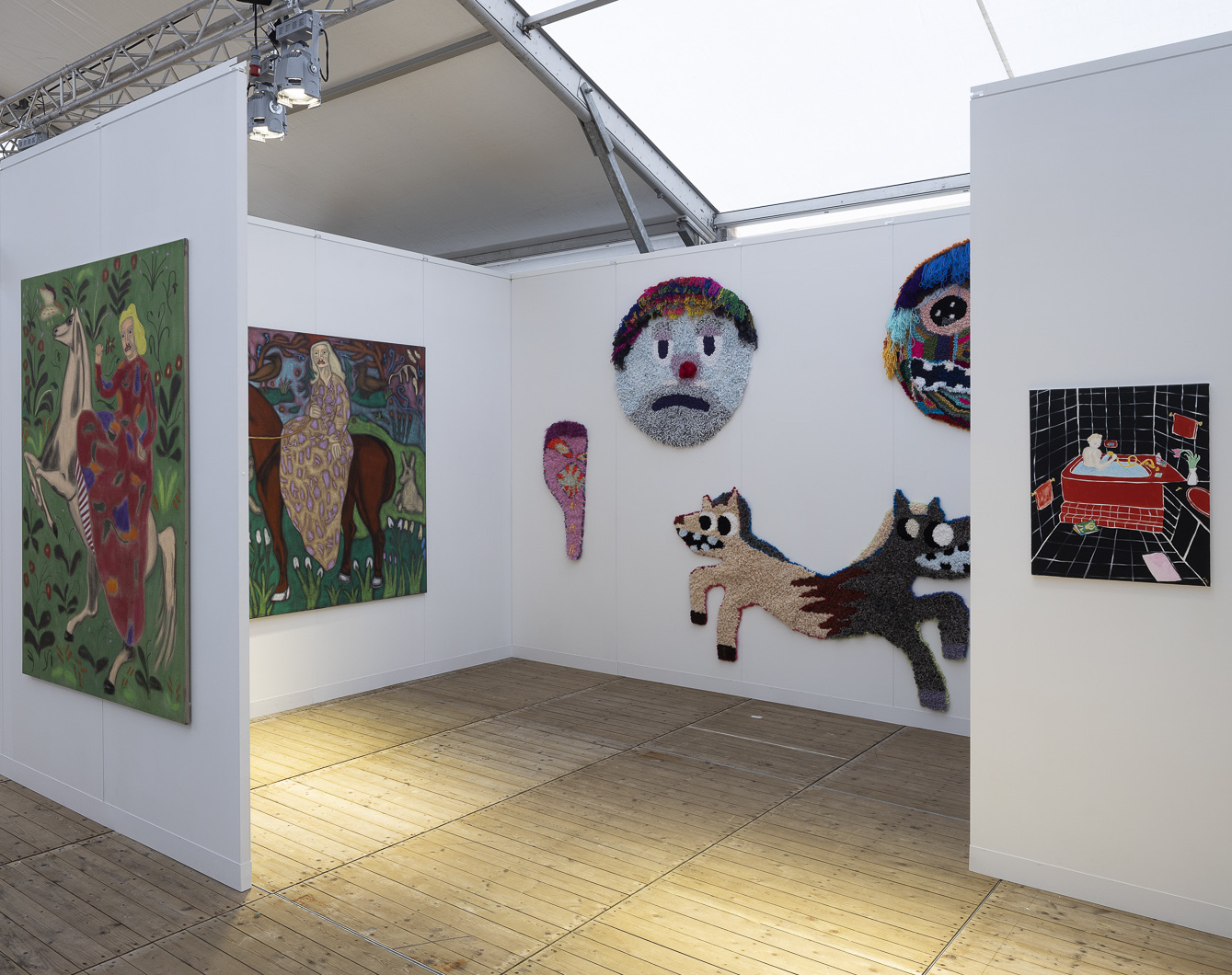 At Enter Art Fair, Steve Turner will present new work by six artists: Mariel Capanna (Philadelphia & New Haven); Dominic Dispirito (London);  Hannah Epstein (Toronto & Los Angeles); Kevin McNamee-Tweed (Iowa City); Claire Milbrath (Montreal) and Paige Jiyoung Moon (Los Angeles). While they work with disparate materials and styles, all six artists create narrative works that loosely relate to themselves and which have an affinity with vernacular art. Beyond their folksy charm, each work has a serious side, political in some, psychological in others, yet always there for the attentive viewer. Capanna, Dispirito and McNamee-Tweed will be presenting works in Copenhagen for the first time.

Mariel Capanna creates paintings that are inspired by the long tradition of folk art, including painted furniture, frakturs, samplers, needlepoint and vernacular paintings, that has thrived in Pennsylvania during the last two centuries. Her fragmented compositions are based on memories that have faded and blended over time but which still have a strong emotional power.

Dominic Dispirito creates paintings and drawings that celebrate the British working class and his upbringing in the heart of Cockney London. His latest heavily patterned paintings have a recurring female figure, sometimes on horseback and sometimes within lavish interiors. The tired and melancholy woman is the artist’s mother, and in these paintings, Dispirito has bestowed upon her gifts of comfort and position.

Hannah Epstein grew up in remote Nova Scotia before going to college in even more remote Newfoundland where she studied folklore and learned how to hook rugs. After getting her MFA at Carnegie Mellon in Pittsburgh, she added conceptual rigor to her practice and became, as she calls herself, “a feminist folklorist of the internet age.” Her hooked textiles of monsters, internet memes and historically-inspired creatures are both humorous and threatening.

Kevin McNamee-Tweed works in a range of media–glazed ceramic paintings, monotypes, drawings and artist books–and his studio practice is informed by his wry sense of humor and his affinity with American flyover states. He has the uncanny ability to elicit laughter or smiles with nearly every work he creates.

Claire Milbrath grew up in Victoria, British Columbia before moving to Montreal to study history at Concordia University. Soon after graduating, she founded Editorial Magazine, a print journal on contemporary art, partly so she would have a venue for her own art. In her paintings and drawings, she depicts a character whom she calls “Poor Gray”, an aimless, wealthy, melancholy man. In so doing, Milbrath questions traditional concepts of masculinity by depicting Gray as vulnerable, effeminate and idle.

Paige Jiyoung Moon was born in Seoul and moved to the United States to study at Art Center, Pasadena from which she earned a BFA in 2012. In the ensuing years, she has created an impressive body of small and intricately detailed paintings. Though they are small in scale, they are packed with content. All are created from memory, whether they be scenes of daily life, excursions to the mountains, hotel rooms or portraits of family and friends. They do not always follow rules of perspective or scale, but that does not diminish them. Their strength is their intimacy, each an illustrated diary by a new resident of Los Angeles who seems to be recording the wonder of every new experience.