Steve Turner is pleased to be participating at Expo, Chicago for the first time since 2015, with a presentation of works by sixteen international artists, ten of whom are represented by the gallery and six of whom have had or will have their debut solo exhibition with us in 2021/2022. The selection of artists exemplifies the gallery’s diverse programming with artists from nine countries presenting works that reflect their distinct identities, experiences and geographies.

Jingze Du (born 1995, Yantai, China, lives Dublin, Ireland) creates paintings that are largely grey with accents of black and white. Most depict heads in various configurations. Some are slightly contorted while others are more naturalistic. They represent an oscillating position that is in between various alternatives: strength and weakness; fast and slow; masculine and feminine; validation and rejection; external and internal; conformity and independence, and above all they represent Du’s status as an immigrant, someone whose life has been neatly divided into two parts, the first half in China; the second half in Ireland.

Bianca Fields (born 1995, Cleveland, lives Kansas City) creates paintings that are composed with thick brush strokes, agitated lines and drippy marks to convey animated images of her emotional self. She draws from cartoons and other childhood imagery to create works that are at once attractive and grotesque.

Ania Hobson (born 1990, Worcestershire, England, lives Suffolk, England) creates paintings that feature her likeness and which relate to emotional explosiveness. Fire is the symbol that appears in many of her paintings–from a candle, a cigarette, a lighter, a trash bin or in the most extreme case, upon the artist’s nude body. When there is no reference to fire, the color red is a frequent substitute. In spite of her exaggerated use of color, composition and expression, Hobson aims to convey an earnest psychological self-portrait.

Kate Klingbeil (Born 1990, Grosse Pointe, Michigan, lives New York and Milwaukee) creates highly textured, multi-layered paintings that depict scenes of nature, especially the small creatures that live underground, in pools of water and in plants and trees. It is the less visible nature of grubs, bugs, snails and ants, a nature that you have to look very closely to see, but a nature that Klingbeil has relished since childhood. It is a magical world in her paintings, a world that runs parallel to the complexities of the human body and its emotional system. Small details coalesce to form larger images. One might discern a human figure sleeping on the land when viewing certain Klingbeil paintings from afar, but up close, there are hundreds of little scenes working together.

David Leggett (born 1980, Springfield, Massachusetts, lives Los Angeles) creates paintings and drawings that utilize a comic style to deal with serious and sensitive subjects like religion and racial injustice. While he makes his works accessible with colorful depictions of Bart Simpson, Mickey Mouse, clowns or other somewhat familiar blobby characters coupled with catchy phrases, he does so to get you in. Once there, you will have to face the more difficult issues that are part of every work. In doing so, Leggett broaches subjects that are often too difficult for most artists to address, or when they do, they do so in a heavy handed, cliché laden manner that has no effect. Leggett’s approach is successful because it does not tell you what to think, but it does ask you to think.

Natalia Gonzalez Martin (born 1995, Montejo de la Sierra, Spain, lives London) creates figurative paintings with compositions that are inspired by Christian narratives and which address contemporary isolation. She often focuses on specific parts of the body–a hand, a foot, a pair of hands, legs, a torso or a face. Some have droplets of water on their skin; some hold fruit that drips juice, and all are draped in cloth or their own long hair. The subjects are demure, yet seductive and appealing, a cross between a 1940s pin up model and an Eve from a Lucas Cranach painting.

Kevin McNamee-Tweed (born 1984, Stanford, California, lives Durham, North Carolina) has a multifaceted studio practice for which drawing and humor are central. Sometimes he draws on paper; at other times he incises a drawn line into clay, adds color with glazes and fires the clay to yield a ceramic painting; at other times he uses ink, a sheet of plexiglass and a sheet of paper to create monotypes; and at other times, he creates paintings that also incorporate drawn lines. Most of his works are modest in scale, often not much larger than a sheet of paper. But they are not paper-thin. They have depth and weight. His ceramic paintings are like tile fragments and his monotypes are typically mounted to wood which has stained edges. As a result, both feel like books, a category of object that McNamee-Tweed values above all others, including art. Whatever the materials and processes, it is the right combination of humor and beauty that makes his works stand out.

Zachary Ochoa (born 1998, Aurora, Illinois, lives Milwaukee) creates paintings which introduce a world of their creation, one with a girl hero, his alter ego, and an array of urns, swords and other weapons, objects that connect Ochoa’s narrative to Arthurian legend. The images are painted so that they float in solid backgrounds and often are juxtaposed with text, “Revenge,” “Dream,” “Dog,” “Friendship,” “Lady,” “Flower Forever” and “Death.” Years of unknown significance, “2002” and “2004,” are also scrawled on many of the paintings. Floating images, words and dates allow for an open-ended reading of Ochoa’s non-linear narrative, one that he aims to expand upon in upcoming projects.  According to Ochoa, “The evolving narrative of Girl Hero allows me to address a number of topics including revenge, love and acceptance while utilizing imagery that is not rooted in any specific time period.”

Dickens Otieno (born 1979, Migori, Kenya, lives Nairobi) creates tapestries and sculpture made of woven strips derived from discarded aluminum cans. Inspired by Kenya’s weaving tradition and his mother’s work as a tailor, the sight of goods piled high in Nairobi’s markets, the contrast of urbanization and nature in Nairobi and the patterns of decoration that are ubiquitous in everyday functional objects, Otieno seeks to create objects of cultural significance that combine his respect for labor, skill and history with his desire to draw attention to the overlooked beauty of everyday Kenyan life.

Shirley Villavicencio Pizango (born 1988, Lima, Peru, lives Ghent, Belgium) creates paintings that are inspired by her upbringing in Lima and the small village of Santiago De Borja in the Amazon rainforest and her move to Ghent, Belgium when she was eighteen years old. After years of study, has nicely reconciled these diverse experiences to record her daily life in Ghent by painting portraits of family, friends and strangers. She portrays her sitters within lush vegetation and amidst textiles, pottery and geometric forms reminiscent of Incan sources. Her paintings are colorful, loose, expressionistic and folky and her sitters are depicted with a concise sensitivity that conveys nostalgia, memory and melancholy.

Thomias Radin (born 1993, Abymes, Guadeloupe, lives Berlin) creates paintings that arise from his distinctive practice of melding dance with painting. The resulting canvases feature a fragmented dervish of a figure against colorful backgrounds. The figure is Radin’s and the background is Caribbean. The movements relate to his Guadeloupian homeland and are inspired by the double consciousness he feels as a Black expatriate living in Germany. He uses the musical technique of sampling to depict fragments of memory and experience and aims to convey the fundamental elements of dance – intuition, intimacy and vulnerability.

Camilo Restrepo (born 1973, Medellín, lives Medellín) creates works that represent the mind-numbing drug violence that for decades has besieged his native Colombia. Using techniques more often associated with sculpture, he creates large-scale drawings that highlight the materiality of paper by scratching, scraping and cutting into it. He erases with a precision knife leaving scars and wounds that remain visible. His works are dense with cartoon imagery with every situation illustrating some aspect of Colombia’s narco world and the consequences to his mental and emotional faculties. While Restrepo certainly is an art world insider (he earned two degrees in Colombia as well as an MFA at CalArts), because of the obsessive nature of his work, he can easily be mistaken for an outsider artist.

Gabby Rosenberg (born 1992, Chicago, lives Los Angeles) creates paintings that encompass both representation and abstraction. Some lean one way, some the other, but all include rich color compositions, carefully chosen for the way individual colors relate to others. These relationships, which sometimes have sharp contrast and other times subtle contrast, are central to Rosenberg’s compositions. To the extent that figuration is depicted, Rosenberg presents gender-ambiguous figures that are part self and part monster. Many have fragmented body parts that are stacked in concentric circles. These blobby characters are often depicted with exposed joints or innards, a suggestion of vulnerability. They represent a visceral feeling of otherness and the complex fluidity of identity.

Terron Cooper Sorrells (born 1994, Portsmouth, Virginia, lives Chicago) graduated from the Maryland Institute College of Art in 2016 where he focused on printmaking. After moving to Chicago he has steadily developed his painting practice which focuses on imagery drawn from African American history and culture. His experience as a printmaker has enabled him to develop complicated compositions that best address this subject matter.

Brittany Tucker (born 1996, Brooklyn, lives Vienna Austria) creates paintings that combine her own likeness with that of a cartoonish image of a generic white man. She misrepresents the white figure in order to address the uneasy relationship between American blackness and whiteness and to offset the stereotyped characters from minstrelsy. By rendering herself realistically, she makes herself the primary subject while the white man is the joke of the painting. The awkward situations highlight the growing divide between the races and the sexes in the post-Obama Trump era.

Yung Jake first received acclaim for his rap videos that relate to technology, social media and pop culture. Since then, he has created wall works that combine painting, printing, drawing, collage and video on supports made of found metal and new powder-coated steel. He juxtaposes images of twisted Fiji Water bottles, cartoon and video game characters and his own likeness to create paintings that are all encompassing self-portraits. In addition to portraying aspects of his appearance, they depict his fascination with the pop culture images of his youth. By using scrap metal, Yung Jake has sought the perfect balance to the ephemerality of the Internet. His latest works utilize nerf toys that he melts together to create colorful compositions. 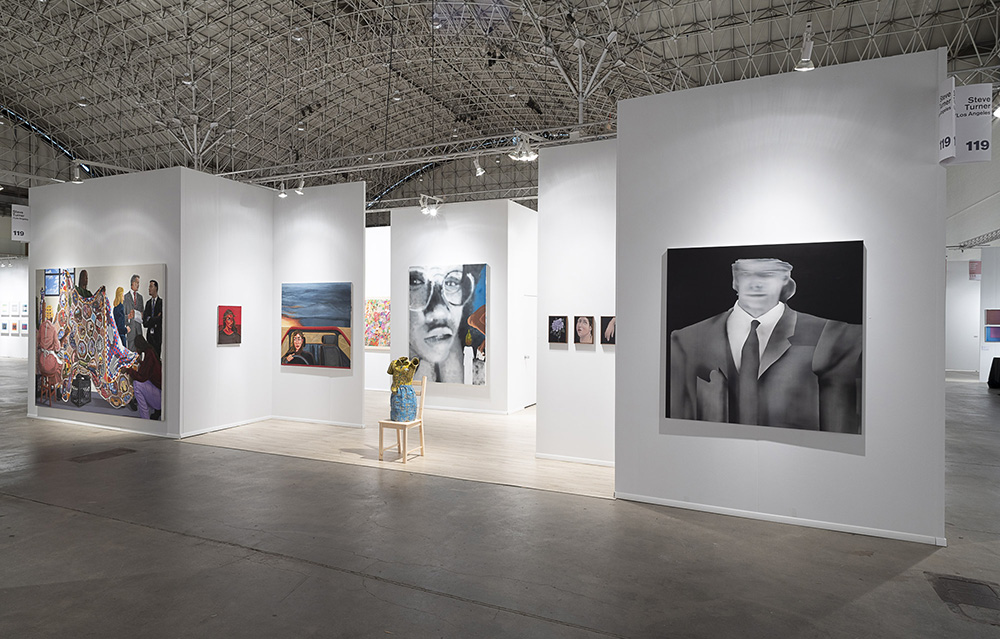 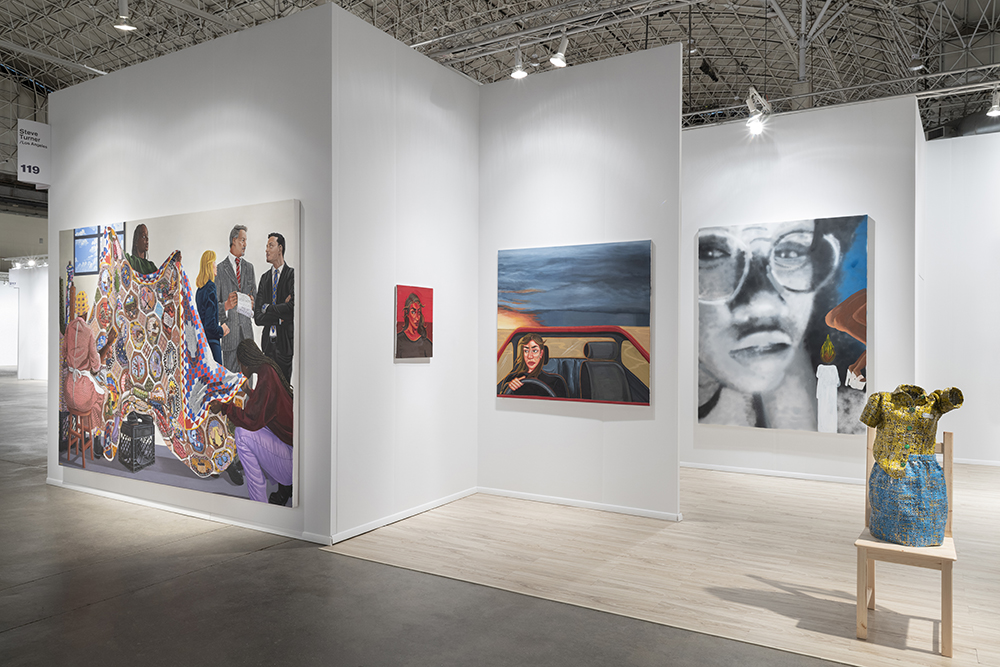 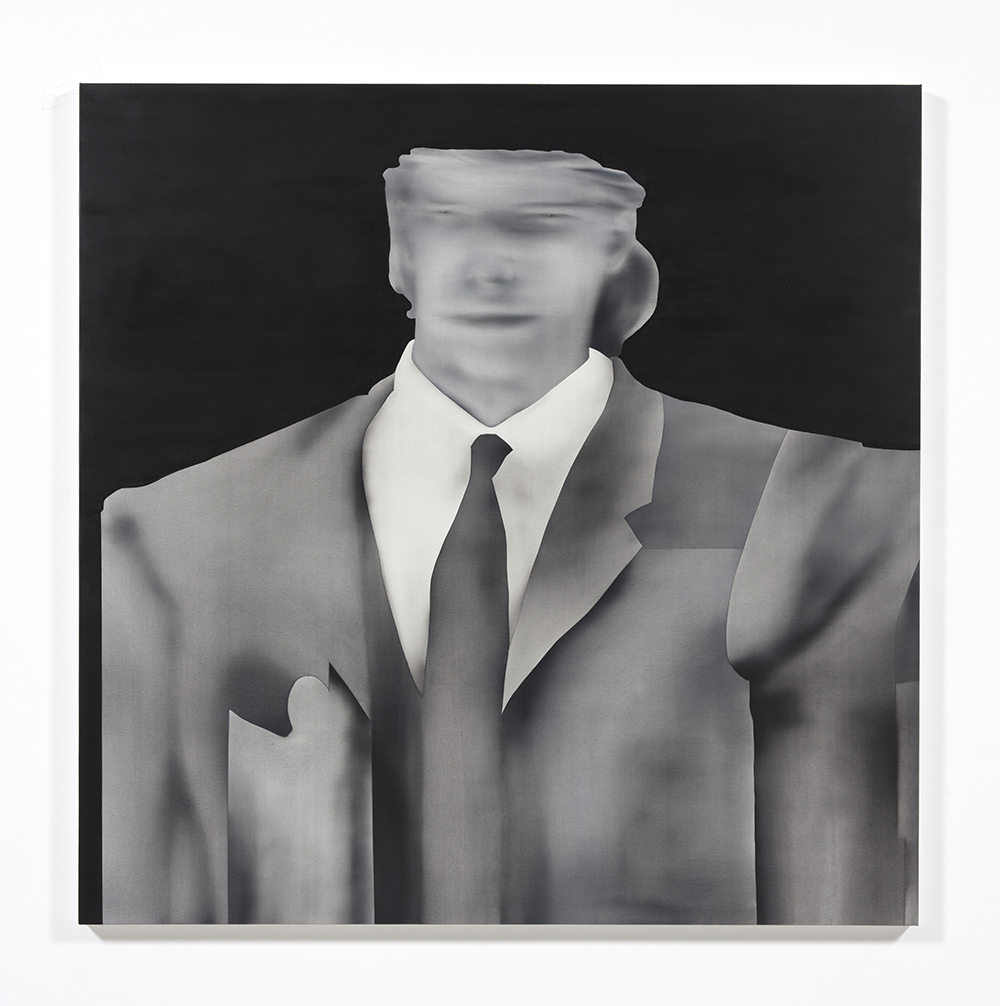 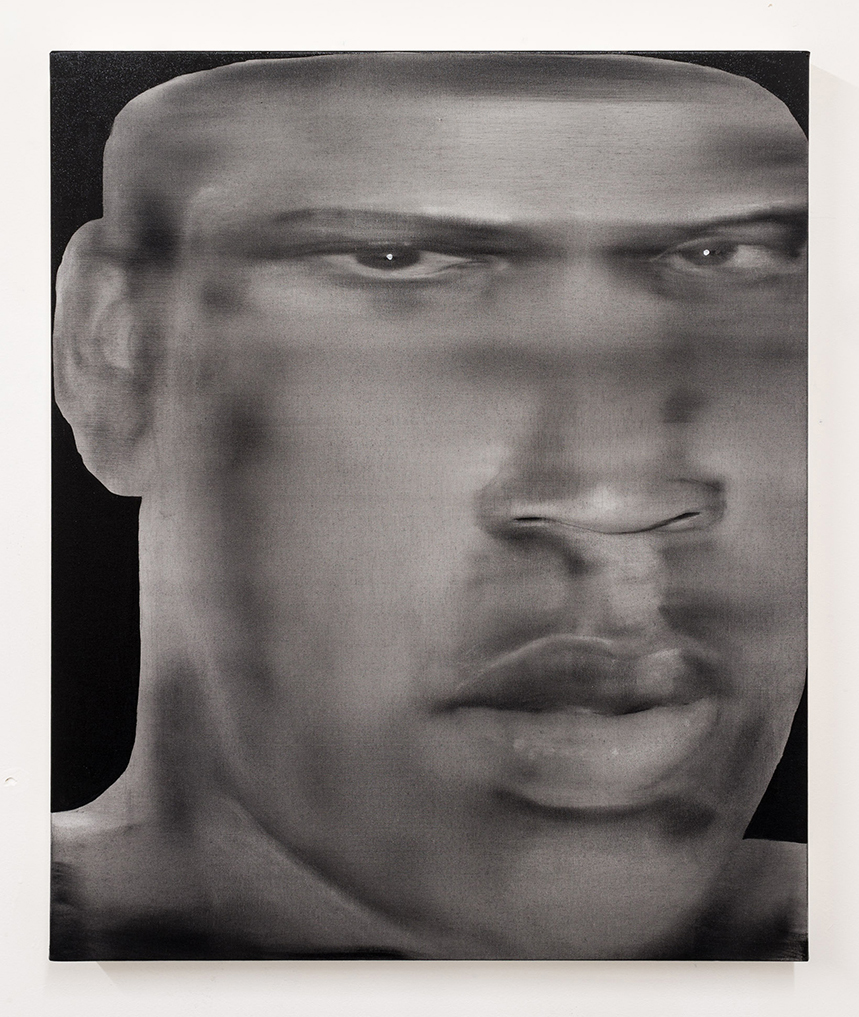 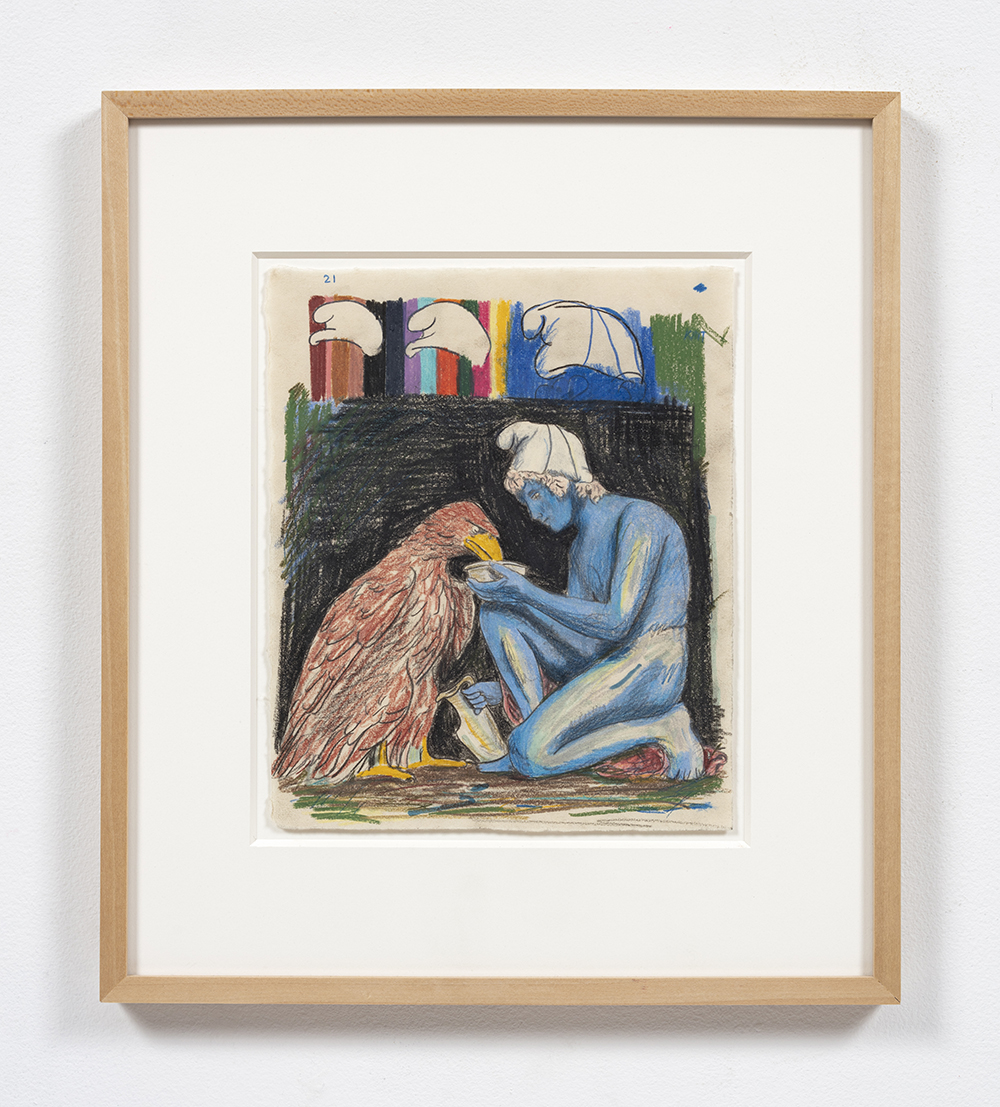 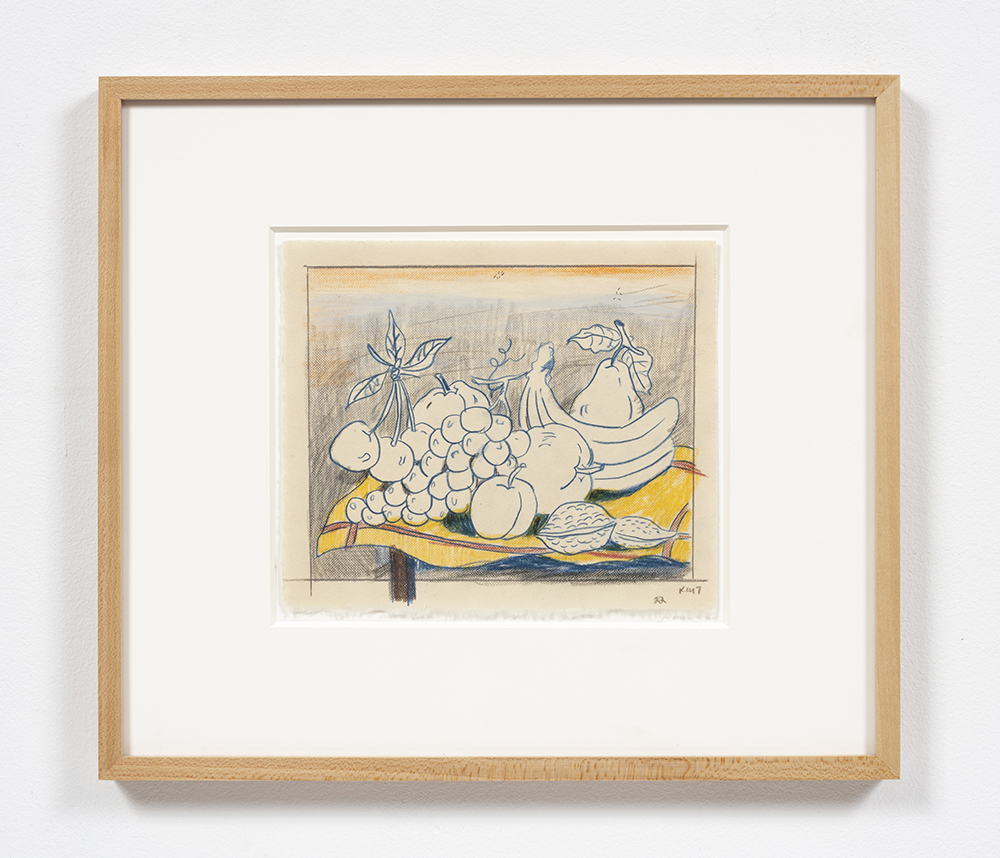