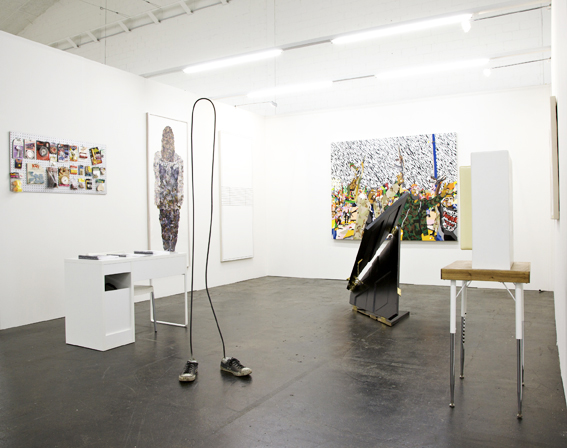 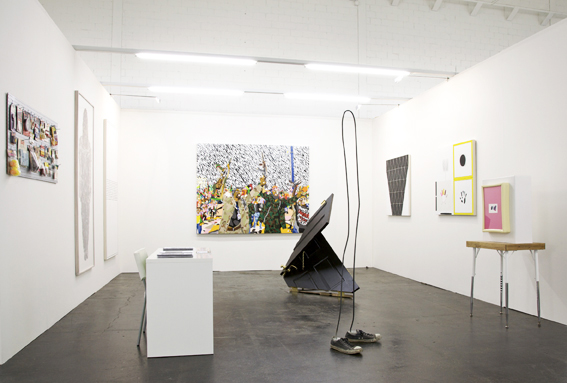 Steve Turner Contemporary will debut at VOLTA with Five Card Stud, an exhibition featuring the work of five young Los Angeles-based artists whose diverse practices reflect the city’s dynamic art scene. For the five artists here, the legacy of Ed Kienholz’s assemblage-based work is especially strong. Other recent influences on the group include Helter Skelter, the 1992 exhibition organized by the Museum of Contemporary Art, which featured Mike Kelley, Chris Burden, Charles Ray, Paul McCarthy and Lari Pittman; and Thing: New Sculpture from Los Angeles, the 2005 exhibition organized by the Hammer Museum.

Though their motivations and output differ significantly, the five artists in the exhibition-Joshua Callaghan, Michael Decker, Morgan Wells, Rowan Wood, and Jemima Wyman-have all made sculpture, collage or assemblage often made of disparate found material. Beyond material, their works share an attitude that unites them. Their voice is that of the proletariat, protestor, occupier, and at times, trickster. They examine history and remix it. They are unafraid to delve deeply into their unique pursuits. To use the poker term, they are all in.

Joshua Callaghan creates humorous sculptures that embody some of the ubiquitous and largely overlooked objects of everyday life-bollards, paperclips, utility poles and cheap umbrellas. His fifteen-foot Two Dollar Umbrella was featured at Frieze New York in May 2012.

Michael Decker creates sculptures and installations that result from searching for, collecting, studying and indexing discarded objects. His sculptural installation, Old Growth, consisted of forty 1960s ironing boards, and was exhibited at VOLTA NY in 2010.

Morgan Wells creates sculpture that revolves around a found work of art. He calls the series Possible Side Effects and he considers each work a consequence of the serendipity of finding a discarded work of art by an unknown maker.

Jemima Wyman creates paintings, collages and sculpture that are inspired by the clothing worn by revolutionary armies and protest movements. Her highly patterned compositions can be associated with patchwork quilts and/or warfare camouflage.

Rowan Wood creates paintings and sculpture that refer to language in purely visual terms. He creates sequential paintings that utilize a strict vocabulary of symbols. The subtlety of the compositional shifts from painting to painting communicates an intuitive sensitivity within a rigid formal structure. Wood’s paintings are best viewed in person for their delicate response to light.