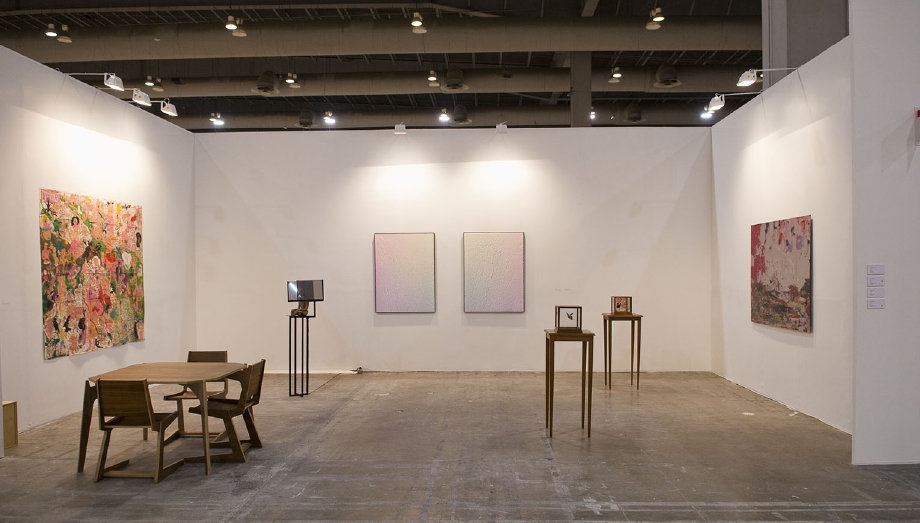 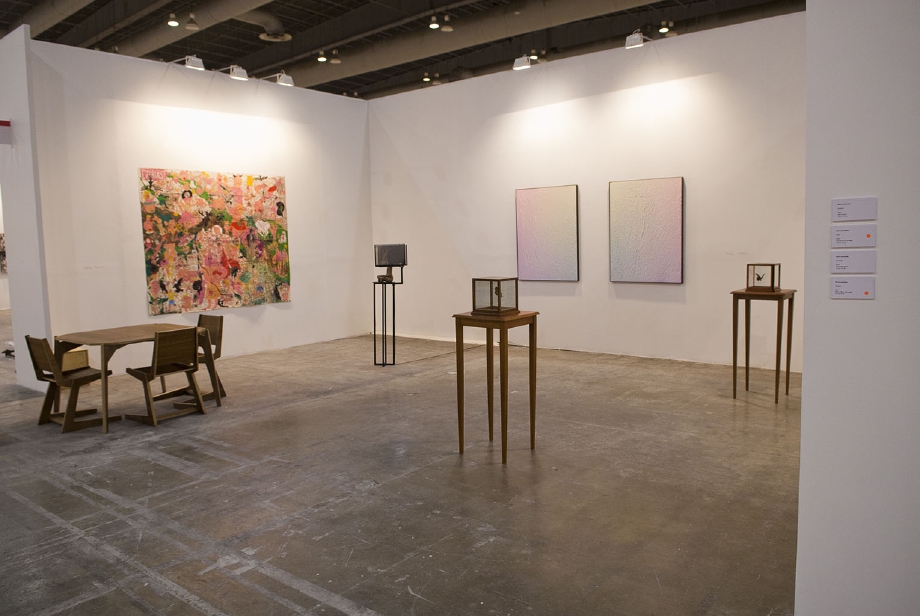 Michael Staniak. IMG_731 (holographic), 2013. Casting compound and acrylic on board with steel frame, 48 x 36 inches each

Maria Anwander is a conceptual artist who makes works that critique the art world itself–museums, journals and the market. Her work was prominently featured in The Disrespectful, an exhibition curated by Carlos Palacios at the Carillo Gil Museum, Mexico City in 2012. In that exhibition, Anwander presented My Most Favourite Art, her collection of museum wall labels that she had stolen from museums around the world. Her first solo exhibition at Steve Turner runs through March 15, 2014. At Zona Maco we will present a group of drawings that appear to be actual printed wall labels.

Petra Cortright began presenting work on the internet at age fifteen and has been one of the best known and most widely exhibited internet artists over the last decade. In the last few years, Cortright has moved beyond just jpegs, websites and YouTube and has begun to incorporate elements of the online experience into her static works. At Zona Maco, we will present a selection of webcam videos as well as a digital painting on aluminum. The webcam videos are all self-portraits entirely free of post-production editing and they are priced according to the number of times they have been viewed on YouTube. Cortright’s most recent works are paintings that she creates digitally on her computer and has printed on aluminum. Her first extensive solo exhibition took place at Steve Turner  in November / December 2013.

Pablo Rasgado has created an extensive and diverse body of work during the last five years. As a resident of Mexico City and having had lengthy visits to Bogotá, Lagos, Los Angeles, New York, Paris, Quebec, Tel Aviv and Tijuana, Rasgado explores cities as though he were an urban archaeologist. He investigates micro-histories that relate to architecture and the use of public space.  At Zona Maco, we will present a sculpture that includes a broken figure that has been repaired with photographic filters and adhesive tape. When presented in the dark, the filters and tape produce prismatic light effects. Rasgado is interested in the way in which objects and buildings fall into ruin—and how ruin is often staved off in Latin America by creative and often impractical repair-work. By highlighting the missing elements of the broken objects, Rasgado continues his practice of casting light on neglected aspects of urban daily life. Rasgado will have solo projects in 2014 at ARCO Madrid and Art Basel as well as his fourth solo exhibition at Steve Turner.

Camilo Restrepo creates works that represent the drug violence that for decades has besieged Colombia. Using techniques more often associated with sculpture, he highlights the materiality of paper by scratching, scraping and cutting into it. He erases with a precision knife leaving scars and wounds that remain visible.  At Zona Maco, we will present A Land Reform 4, a large drawing based on the aliases of those connected to the drug cartels.

Michael Staniak explores the relationship between technology and craft by creating complex, abstract trompe l’oeil paintings that seem to be computer generated. In fact, they are meticulously created by hand with layers of casting compound and a delicate airbrushed surface. The results mimic inkjet printing and suggest a holographic effect. Staniak will have his first solo exhibition at Steve Turner in March 2014. At Zona Maco, we will present a pair of paintings.

Fabiola Torres-Alzaga uses magic, illusion and special effects to create works that are not always what they appear to be. Her vitrines house tables and playing cards utilizing a 19th century aesthetic. Through the use of mirrors, the scene varies according to the vantage point of the viewer who must circumnavigate the vitrine. Torres-Alzaga allows the viewer to see both the mechanics of the illusion and the illusion itself. In so doing, she demonstrates that deception, perception and viewpoint are all components determining what is real. Torres-Alzaga had a solo exhibition at Steve Turner in 2013 and will have her second solo museum exhibition at El Chopo, Mexico City in October 2014. At Zona Maco, we will present two new butterfly vitrines.

Edgar Orlaineta creates works that re-contextualize modern design to demonstrate aesthetic and social values. He has made works that were inspired by the designs of Charles Eames, Gerrit Rietveld and Eero Sarinen as well as the art of those of the Huichols, the Hopis and other traditional Mexican crafts. In Zona Maco Sur, we will present recent works, some of which were included in his 2013 solo exhibitions at Museo Experimental El Eco, Mexico City and El Chopo, Mexico City. Orlaineta will have his second solo exhibition at Steve Turner in 2014.