I Want Your Washing Machine 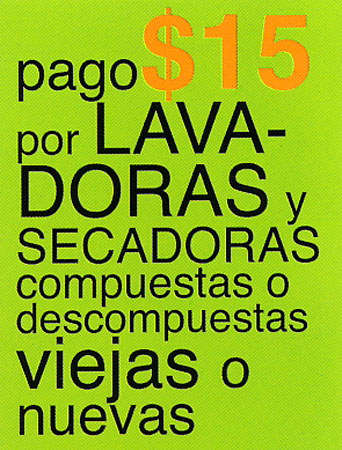 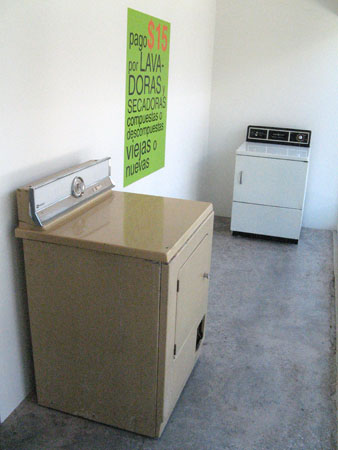 Steve Turner Contemporary presents I Want Your Washing Machine, an installation by Camilo Ontiveros. During the weeks leading up to the exhibition, Ontiveros will post advertisements seeking to buy used washing machines for $15. During the run of the exhibition, he will reconfigure the gallery into a second hand shop for washing machines, will oversee the repair of some machines and will transform others into brightly colored minimal sculptures by having them repainted at an auto body shop.

While Ontiveros often uses washing machines in his work, he is more interested in issues relating to immigration, the border between Mexico and the United States, unofficial economies, labor and most importantly, notions of value. The washing machine is merely the commodity he chooses to use to explore these themes.

In buying the washing machines, Ontiveros interrupts the typical flow of broken machines to metal recycling plants. The sellers from whom he buys are often undocumented immigrants who scour neighborhoods for discarded objects. In so doing, he questions what gives value to a machine-its functional utility, the labor connected to salvage and transportation, its raw material, or in rare cases, its beauty.

Ontiveros earned an MFA from the University of California, Los Angeles in 2009 and a BA from the University of California, San Diego in 2006. He is co-founder of NOMART, a mobile performance art space; a member of the DoEAT Collective; co-founder of Lui Velazquez, an artist residency program in Tijuana and co-founder of Imprenta, an alternative art space that recently opened in the MacArthur Park area of Los Angeles. He is also the former curator for Voz Alta, a project space in San Diego. This is his first gallery solo exhibition.