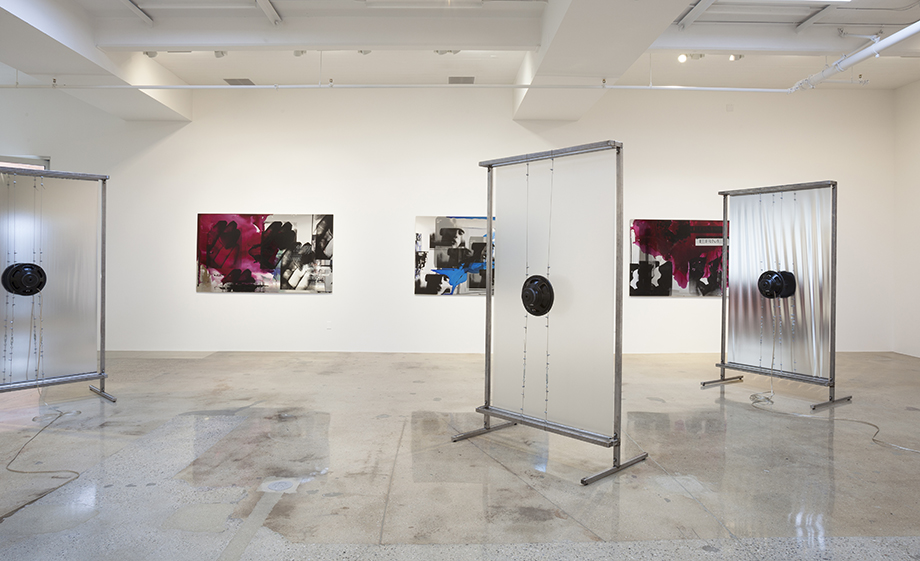 Everything is Still What It Was,2015. Silkscreen print and vinyl on mirrored plexiglass, 48 x 84 inches

What Are You Thinking About, 2015. Silkscreen print, acrylic paint and vinyl on aluminum, 47 x 39 inches

Steve Turner is pleased to present Always, a solo exhibition by London-based Hannah Perry which features video, sound sculpture and painting. Her works are a mash-up of processes and materials–screen printing, painting and collage on aluminum, vinyl and acrylic with welded steel adding heft to the installation. The centerpiece of the exhibition is a twelve minute video that will be screened in the project room. In turn, it will be connected via speaker wires to the mirror-finished sound sculptures that vibrate in the main room. Finally, Perry will install a selection of paintings on the walls of the main room which contain abstracted images from the video. As the images in the video are repeated in the paintings, so too is its rhythm and sound in the sound sculptures. In so doing, Perry animates through vibration her narrative relating to youth, love and power, from video to sound sculpture to painting.

Born in Cheshire, England, Perry later studied in London, earning a BA from Goldsmiths College and an MA from the Royal Academy. In 2014 she had solo projects in London at the Zabludowicz Collection and the Serpentine Gallery. This is her first exhibition at Steve Turner as well as her first exhibition in the United States.

2014
Reyburn, Scott. “On Screen and on the Block” The New York Times, May 30
Swift, T. “Hannah Perry at Serpentine Galleries Reviewed” aqnp, September 22